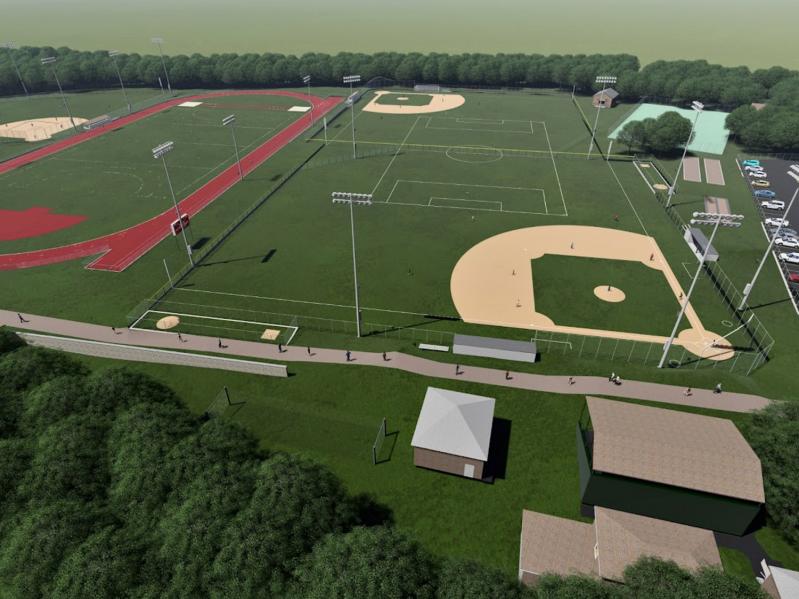 Renderings of the proposed Mashashimuet Park renovations were unveiled on Monday.
H2M Engineers and Architects
By Christine Sampson

The Sag Harbor School District unveiled on Monday the specifics and cost of a major overhaul of Mashashimuet Park, which has been in the works for nearly a year. The price tag is estimated at $13.5 million.

All told, according to Saverio Belfiore of the Melville-based architectural firm H2M, the proposed fields and facilities “fit within the existing cleared area” in 13 of the park’s 45 acres, with “no additional clearing” needed and “no new intrusion into local animal habitats.” A recent study done in accordance with New York State law concluded that the project will not have any negative impacts on the environment.

For several decades, the school district has relied for its athletic facilities on Mashashimuet Park, as its own real estate holdings are limited. The overhaul of the park includes two baseball fields, two softball fields that can also be used by Little League teams, dugouts and a pitching cage, room for a soccer field in the baseball outfields when they’re not being used, a six-lane track with a field hockey field in the center, and a second comfort station.

Also, there will be electronic scoreboards, portable bleachers, Wi-Fi accessibility throughout the park, an advanced lighting system that complies with “dark skies” guidelines, a sound system, an access road for emergency vehicles, a reorganized parking lot that will actually have more spots, drainage and irrigation systems, and a bus loop for drop-off and pickup. The playground and tennis courts, situated along Bridgehampton-Sag Harbor Turnpike, will stay the same.

The $13.5 million estimate includes contingencies of 5 percent for inflation and 10 percent for construction changes, Mr. Belfiore said. It breaks down to $6.65 million for the fields, $2.75 million for paving, access roads, and drainage; $2.1 million for lighting, $1.75 million for support buildings including the restrooms, and $250,000 for the sound system.

School district officials project that a community vote on a bond to pay for the renovations will be held in about three months, giving the public plenty of time to review and weigh in on the plans. The timeline for the construction is dependent on receiving building permits and clearing review by the State Department of Environmental Conservation and other regulatory agencies.

“We are very lucky to have a partnership with the park,” said Jeff Nichols, the school district superintendent. “The focus really was to take the school’s needs . . . and convey them to the park board, and the park board was very, very focused on trying to honor those needs without disturbing the aesthetic that already exists.”

Also planned is a full restoration of the historic grandstand popular among spectators. Janine Rayano, president of the Mashashimuet Park board of directors, explained that that is being handled solely by the park board, and will be done in two phases. First, the seats, roof, and railings will be renovated; after that, there will be masonry work and upgrades to the bathrooms and locker rooms.

“We have successfully raised enough money to do phase one of the renovation of the grandstand, and expect to begin construction in August,” Ms. Rayano said.

The park board, along with Diane Schiavoni of Sag Harbor, held fund-raisers that generated $85,000 in donations. The Sag Harbor Partnership provided a grant of $40,000, allowing the park board to meet its financial goal for phase one. “The park board is very appreciative to the community for its generosity,” Ms. Rayano said on Tuesday.

Mr. Saverio said the existing cross-country trails will not be changed, except to give them a little “T.L.C.” The district is also in consultation with the noted landscape designer Ed Hollander to add greenery that will soften the appearance of what school officials otherwise described as “sort of industrial.”

In the interim, before the plans can become reality and a long-term lease can be signed, the Sag Harbor School Board approved another one-year contract with the park board, which will cost the district $221,246. The current one-year lease was the outcome of a process that was not without criticism. Several board members cautioned that this new short-term agreement would not work if it were to become the long-term model.

Alex Kriegsman said the contract “is a bad deal for the school district,” but that it is a starting place for the district and park board to continue good-faith negotiations. Chris Tice, another board member, called it a stop-gap measure.

“We hope that the bond will pass and then there will be a long-term agreement that will be structured differently,” she said. “This is a stop-gap to get us to that place. If the bond was not going to be in place, then my recommendation would be to have a very difficult approach to this, one that has kind of more teeth in it as two parties in a relationship.”