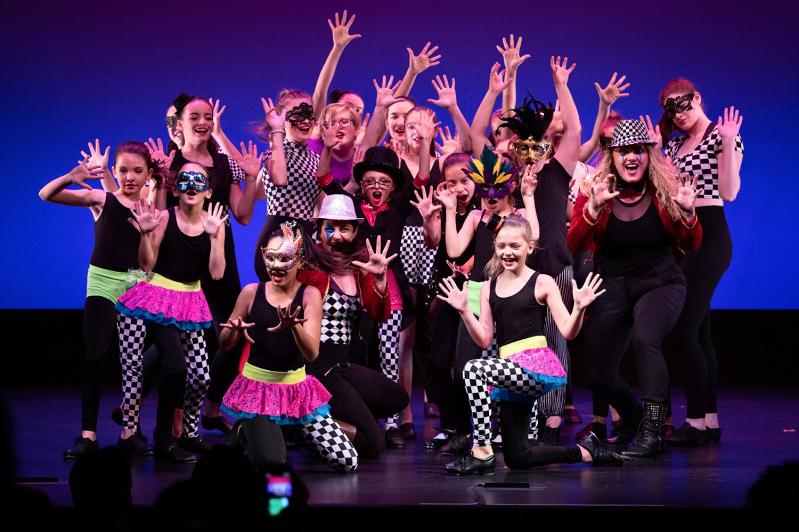 Lights up on center stage — summer means showtime for kids and teens who want to immerse themselves in the performing arts. Four regional institutions can help students become a triple or quadruple threat, with acting, dancing, singing, and all sorts of stagecraft.

Bay Street’s mission is to innovate, educate, and entertain. Its managers have two philosophies for teaching acting: “process-based” for the adult classes and “product-based” for the children’s classes. Bay Street runs school-vacation programs in the off-season, but between July and August there’s a full slate of more than a dozen day-camp intensives, including the popular My Life: The Musical, the Improv Squad, and Shakespeare Mini.

“The camp participants and the instructor collaborate to find music that best reflects the campers’ life story,” said Allen O’Reilly, Bay Street’s director of education and community outreach. “A script is developed around the selections and it’s presented to friends and family on the final day of camp.”

Other offerings focus on puppetry, playwriting for teenagers, singing for elementary students, Shakespeare, and the myths of ancient Greece.

Fees, typically, are $450 for a weeklong summer program. More information is available from Bay Street’s education department, at [email protected] or 631-725-0818, extension 213.

An arts education organization with a mission to create innovative cultural experiences that are accessible to a broad range of people in the community, Our Fabulous Variety Show is based in Bridgehampton. It is probably best known on the South Fork for its annual variety shows — held prepandemic at the John Drew Theater of Guild Hall in East Hampton or more recently at LTV Studios in Wainscott — which feature an all-ages range of costumed tykes, teens, and adults dancing and singing their hearts out and clearly having the time of their lives.

Our Fabulous Variety Show does a lot, from private coaching to group classes in acting, improv, and puppetry. Some of its most popular offerings are one-off master classes held in East Hampton and Bridgehampton, including one in hip-hop with Sean Green; pre-pointe and ballet with Megan Callahan, and contemporary dance with Colleen Edwards.

“Our approach to teaching centers on the students. We work with the skills they have and build upon those for both theater and dance,” said Kasia Klimiuk, a co-founder. “We also teach basic acting skills and foundational dance technique in tap, ballet, lyrical, hip-hop, and jazz to dancers of all ages.”

This summer, O.F.V.S. is offering a program called Page to Stage, a series of one-week workshops (broken out into different groups, 5 to 7, 8 to 10, and 11 to 15) that run from July 11 through Sept. 2, with coaching in acting, dance lessons, and, for the oldest group, audition tips.

Fees range from $35 for a one-off master dance class to $135 for a series of six group classes, or $450 for a weeklong summer Page to Stage workshop. More information is at ourfabulousvarietyshow.org or 631-507-4603.

Programs and workshops at the Southampton Arts Center on Job’s Lane are generally tied to the visual-arts exhibitions on show in its gallery spaces, according to Joe Diamond, the center’s general manager.

“From silent discos to eco fairs, live and virtual to wellness and beyond, we engage and inspire the community to join in a shared passion for the arts,” it says on the website.

This summer, there will be a variety of art classes and theater-centric offerings. On Wednesdays in July, Ramblin’ Dan’s Freewheelin’ Band will offer 45-minute music classes for those age 4 and under. On Saturdays, there are rehearsals for the Explorer’s Club, which — with support from the Office for People With Developmental Disabilities — is an offshoot of the East End Special Players Theater Group for adults.

“We are at our best when our events are the product of our strong partnerships,” said Mr. Diamond.

In its one and two-week sessions, from Aug. 8 to 12 and Aug. 15 to 19, Camp Shakespeare puts the focus squarely on theater, acting, and theater games for kids ages 8 to 14. The summer of 2022 will be the 23rd year that parents have gathered late each Friday afternoon in August to see the children’s end-of-week performances as Malvolio, Puck, or Juliet in shortened versions of Shakespearian plays.

The camp counselors are, naturally, a company of professional actors who are otherwise engaged, after dark, with performances of “Twelfth Night” and “Much Ado About Nothing,” among others.