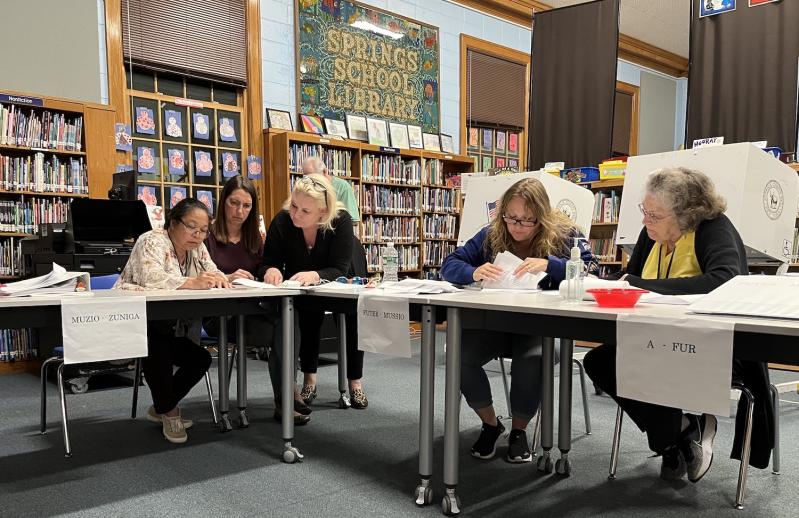 With the approval of 2022-23 school budgets across the South Fork by wide margins, as well as separate proposals greenlighting projects such as a new playground, building repairs, air-conditioning upgrades, and school choice, voters spoke loud and clear in support of district spending plans.

Two districts, Sagaponack and Wainscott, successfully pierced the state-mandated cap on tax-levy increases, avoiding budget cuts that would have decimated programs and services for kids. In the only districts with contested school board races, Springs and Sag Harbor, Emma Field and Erik Fredrickson were elected to the Springs board and Grainne Coen and Ronald Reed won seats in Sag Harbor.

Turnout in many instances, including in Amagansett, Springs, and East Hampton, was somewhat lower than in prior years.

"I believe the community appreciates the district's transparency in the budgeting process," said Adam Fine, the East Hampton superintendent. "We have worked very hard to keep the [tax-levy increase] under 2 percent. That has been a driving force behind our budgeting process, along with keeping our programs and staffing intact. I truly appreciate the community's support and trust."

The East Hampton School District's $76.5 million budget was approved 186 to 21, indicating nearly 90 percent voter approval. The community also said 'yes,' by a vote of 189 to 19, to a budget-neutral proposition to create a new reserve account dedicated to repairs. This will give the district the ability to take year-end surpluses and stow them away for emergencies that may arise in the future.

"The entire board is happy to have overwhelming support from our taxpayers," Mr. Foster, the school board president, said on Tuesday after the vote.

Following a long and tedious budget development process, resulting in a $32.89 million proposal, Springs voters approved the budget, 323 to 111 — a decisive 74.4 percent supporting the spending plan.

In the race for school board, Emma Field and Erik Fredrickson were the winners. They competed with Hella Drew and Summer Romeo for two open seats. Ms. Field and Mr. Fredrickson received 289 and 234 votes, respectively, and will serve three-year terms on the board. Ms. Romeo, who ran as a slate with Ms. Field, received 198 and Ms. Drew 70.

"It was so great to see the community come together, really get involved, and care as much as they do," Ms. Field said on Tuesday.

Mr. Fredrickson said he looks forward to getting to work in July, when the new board members are sworn in. "I'm humbled by the support and am eager to contribute to help our school and be a strong listener for our community," he said by email after the vote.

Springs voters also turned out to support a new playground, approving $450,000 from the district's capital reserve fund to pay for the project. The measure received about 81 percent voter approval. A third proposition, to authorize the purchase of a school bus not to exceed $135,000, also passed, receiving about 77 percent approval.

"I'm thrilled that the budget passed," said Debra Winter, the Springs superintendent, "and I welcome our two new board members. . . . And a new playground! I'm so excited for the kids."

In Sag Harbor, the $45.99 million budget proposal passed easily, 911 to 197, but a hotly contested school board race was the big story on Tuesday night. Grainne Coen and Ronald Reed were the successful board candidates in a field of four that also included Heather Hartstein and Janice D'Angelo.

Ms. Coen was the only candidate whose name appeared on the ballot, but the others stepped up to run write-in campaigns. Ms. Hartstein and Ms. D'Angelo ran together as a slate, as did Ms. Coen and Mr. Reed. The campaign often played out in text messages, emails, and social media posts, both public and private, urging support for one slate or the other. In the end, Ms. Coen got 883 votes, Mr. Reed 733. Ms. D'Angelo received 186 votes, Ms. Hartstein 179. Thirty-one other write-in names were recorded, but none had more than a few votes each.

After the vote, Ms. Hartstein and Ms. D'Angelo walked across the Pierson Middle and High School gym to shake hands with and congratulate the winning candidates. On Facebook, Ms. D'Angelo thanked the community for voting, and looked ahead to the future. "Thank you, everyone who voted!" she said. "We didn't get in. . . . We appreciate all of your hard work. The community has spoken! There are three seats next year."

Mr. Reed later said that "we all won."

"This election proved our school community is everything we hoped it would be for our children. Thank you all, for all your work you did to make this happen," he said.

Ms. Coen said that she was relieved at the outcome. "It will be an honor to serve on the board," she said.

Also on the Sag Harbor ballot was an additional proposition asking voters for permission to spend $2.5 million from the district's capital reserve account to pay for a major upgrade to the heating, ventilation, and air-conditioning systems at Pierson Middle and High School and Sag Harbor Elementary School. That proposition passed, 961 to 143.

"I was very pleased with the results of the budget vote," said Jeff Nichols, Sag Harbor's superintendent. Jennifer Buscemi, the business administrator, and her staff "worked hard to provide a comprehensive overview of the proposed budget over the last several months."

Wainscott's over-the-cap budget proposal was its third since the tax cap was instituted in 2012. Enrollment, particularly in the special education area, causes big fluctuations that are often unpredictable, the district has said. Its $4.13 million budget was supported by nearly 94 percent of voters who said "yes," whereas a minimum of 60 percent was needed. The vote was 43 in favor and three opposed.

"While we are relieved that a revote and a contingency budget have been avoided, there are no material differences between the now approved budget and the contingency budget," David Eagan, the school board president, said. "For example, we do not fund interscholastic athletics and other elective activities like larger districts. This also confirms that our proposed budget represents the lowest budget necessary to operate our highly acclaimed [kindergarten-through-third grade] program in our schoolhouse and to fund our substantial tuition payments for our pre-K and [grades] four-to-12 students. . . . Our voter turnout was fairly average, perhaps a bit lower than pre-pandemic years. That may reflect the fact that there has been a significant turnover of properties within our district, particularly in southern Wainscott. "

Voters also supported a proposition that will add Bridgehampton School as a third option for Wainscott children in fourth grade and up. At present students have a choice between East Hampton and Sag Harbor schools, but a more favorable tuition rate and Bridgehampton's newly renovated facilities were attractive to Wainscott School officials. All 46 voters who cast a ballot in Wainscott were in favor of the Bridgehampton contract.

William Babinski Jr. was Wainscott's lone candidate for a seat on the school board. He received 43 votes.

Sagaponack was in a similar situation. Its $1.87 million budget passed unanimously, with 24 "yes" votes and zero "no" votes, on Tuesday. The district needed a supermajority of at least 60 percent voter approval for it to pass, and reported receiving 100 percent. Cathy Hatgistavrou, a longtime board member, was re-elected to another term with 24 votes.

Voters in Amagansett handily approved a $12.66 million budget plan for the 2022-23 school year as well as a pair of separate propositions. With a tally of 84 to 11, the budget received about 88 percent voter approval. Residents also gave the green light for Amagansett to spend $450,000 from a capital reserve account for building repairs, which district officials said would not impact taxes. The proposition was supported 85 to 10. A measure allowing the school to buy a new bus at a cost of just under $60,000 was also approved, 86 to 9.

The school board race was uncontested. Kristen Peterson, the sitting school board president, was re-elected with 75 votes, while Wayne Gauger, a newcomer, will join the board after receiving 77 votes.

Seth Turner, the district superintendent, said in a statement after the vote that "the 88 percent passing rate of the school budget is a strong indicator that the board of education has prepared a budget that is aligned with the expectations of the community. I congratulate Kristen Peterson for being re-elected and welcome our new member of the board of education, Wayne Gauger."

The Bridgehampton School District avoided a repeat of last year's budget anxiety, with 73.5 percent of voters approving a tax-cap-compliant budget of $20.9 million. The tally was 103 to 37.

The community also approved renewed leases for the two parcels immediately east of the school that comprise the student-run farm stand, Sprouts. With the affirmative 121-to-19 vote, the district will occupy the two tiny properties for another three years.
In an uncontested school board race, Jennifer Vinski received 121 votes and Carla Lillie received 115. Ms. Vinski will serve her fourth term, Ms. Lillie her second.

"We would like to thank our amazing community for the love, trust, and support," Ron White, Bridgehampton's school board president, said Tuesday night. "Now more than ever, it is imperative for our school district to remain conscientious of sustainability and financial efficiency. We will continue to grow our district by providing innovative educational opportunities, exceptional faculty and staff, and an impactful administrative cabinet."

In Montauk, voters said "yes" to the proposed $20 million spending plan, which stays under the New York State cap on tax-levy increases. The result was 72 to 7, an approval rate of greater than 91 percent. There were no additional propositions on the ballot. Kelly White, an incumbent school board candidate, was re-elected with 72 votes. She had no challengers.

With reporting by Christopher Gangemi