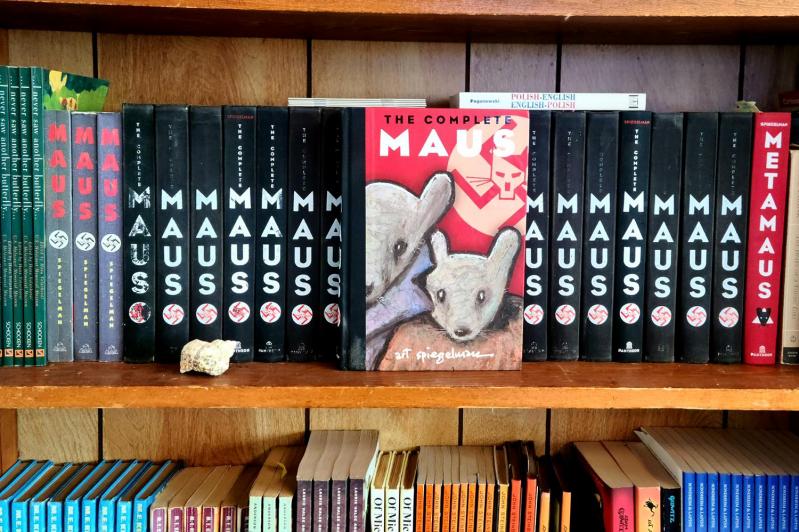 Tom House, a Bridgehampton School English teacher, keeps his classroom stocked with copies of “Maus” for ninth graders to read and study each school year.
Tom House
By Christine Sampson

A Tennessee school board’s Jan. 10 decision to ban from its curriculum an acclaimed book about the Holocaust has made headlines across the country, and the publicity has seen the 30-year-old title, “Maus,” skyrocket to the top of best-seller lists once again.

The ban has piqued an increased interest in the book among people here, too.

Some local bookstores and libraries reported this week that they have received more inquiries than usual about “Maus,” a two-part graphic novel by Art Spiegelman that in 1992 became the first graphic novel to win a Pulitzer Prize. It tells the story of how the author’s parents survived the Auschwitz concentration camp, portraying Jews as mice and Nazis as cats.

In its unanimous vote, the McMinn County School Board said the book contains an “unnecessary use of profanity and nudity, along with its depiction of violence and suicide. Taken as a whole, the board felt this work was simply too adult-oriented for use in our schools.”

“We’ve gotten a handful of inquiries. We have one in the window at the moment intentionally, in light of the book-banning,” said Maryann Calendrille, a co-owner of Canio’s Books in Sag Harbor. “Our distributor is completely sold out. This is a nationwide distributor, and they have thousands of copies on back-order.”

Ms. Calendrille, who first read the book for a class at Hofstra University, has put copies aside for customers this week. “This is a book we always keep in stock because we feel so strongly about it.”

Initially, she said, she hates it “when something like this happens, but what it creates are so many opportunities for people to become aware of it.” In fact, CNN reported this week that comic book stores such as Comics Conspiracy in Sunnyvale, Calif., a suburb of San Francisco, have offered to ship free copies of “Maus” to McMinn students. Nirvana Comics in Knoxville, Tenn., launched a crowd-funding campaign that raised nearly $100,000 to enable it to expand its initial idea of a local “Maus” lending library into a nationwide book distribution effort.

“We’re in a very sensitive time right now. A lot of things are being kicked up. Take a look at the Voting Rights Act — don’t get me started,” Ms. Calendrille said. “It’s circling around and around. The issues of racism, fear, and xenophobia are alive and present, I’m sorry to say.”

Dennis Fabiszak, the director of the East Hampton Library, said his staff has received requests for “Maus” and that there is now a hold on the title for other readers. “Whenever a book is challenged, people come in and want to take it out and remind themselves and understand what could be so bad that somebody would choose to ban such a thing. We saw it also with Dr. Seuss.”

He called book banning in general a disturbing form of censorship. Kelly A. Harris, his counterpart at the John Jermain Memorial Library in Sag Harbor, agreed. Her library’s copy of “Maus” was checked out “overnight.”

“I don’t wish to cast aspersions on anyone,” Ms. Harris said, but McMinn’s ban “just rings a little bit hollow for me. When we live in a world where kids have full access to the internet and YouTube . . . it seems strange to me that they’re going after ‘Maus.’ “

Tom House, an English teacher at the Bridgehampton School, teaches both “Maus” and its sequel, “Maus II,” in his ninth-grade classes, usually toward the end of a school year, and has seen firsthand its value in his curriculum. He objected vehemently to the banning of the book.

“I just wish people would leave the choosing of books for curricula to the professionals. How many of them are English teachers or history teachers? How many of them are Jewish?” Mr. House said. “Are they real readers, that they can make this kind of decision on what students can read at what age? That’s a very specialized question to answer, and it should be left to professionals.”

He also questioned the McMinn board’s rationale. “What nudity? A naked mouse? They’re a bit anthropomorphized, but just barely. There’s no sexual explicitness in any way.”

The banning of “Maus” puts it in the company of such books as Harper Lee’s “To Kill a Mockingbird,” Toni Morrison’s “Beloved,” and “Of Mice and Men” by John Steinbeck.

Attempts at banning books from school settings have not generally stood up in court when challenged. For example, in Island Trees School District v. Pico, a 1982 case, the Supreme Court ruled that the First Amendment prohibits a public school from removing books from a library based on their content. That case began in 1976 when a group called Parents of New York United successfully lobbied the Island Trees School Board to remove nine titles that it felt were “anti-American, anti-Christian, anti-Semitic, and just plain filthy.” Among them were “Slaughterhouse Five” by Kurt Vonnegut and “Best Short Stories by Negro Writers,” edited by Langston Hughes.

The Court ultimately decreed that school libraries are places for “voluntary inquiry,” and concluded that “the school board’s ‘absolute discretion’ over the classroom did not extend to the library for that reason.”

The American Library Association and other professional organizations have issued statements condemning the ban on “Maus.”

“It’s a really dangerous practice to limit people’s intellectual freedom,” Mr. House said. Teachers know their students, “know what they can handle, and what they’ll learn the most from . . . a curriculum is finite — there’s only so many texts you can teach — so you have to make choices. You have to get the outcomes you’re expected to get at the grade level, and you can do that with any number of texts. But why not do it with a masterwork like ‘Maus’?

Mashashimuet Park's History and Future
A Conference for Young People to Create Solutions
Get Outside, Get Moving
END_OF_DOCUMENT_TOKEN_TO_BE_REPLACED