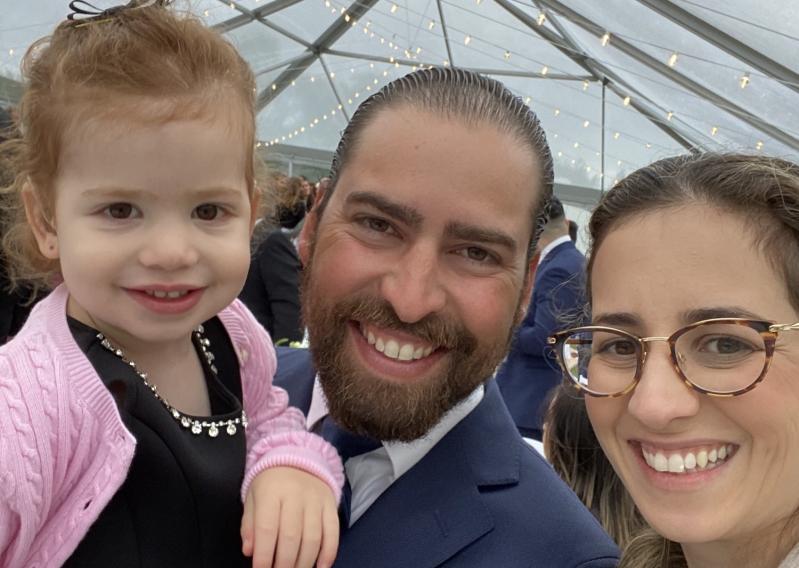 Marcelo and Natalia Reda’s daughter, Alice, was fitted for a hearing aid as an infant and began speech therapy at just 3 weeks old. Mr. Reda remembered thinking, “Speech therapy for a baby? They don’t speak.”
Marcelo Reda
By Judy D’Mello

The massively popular British TV show “Strictly Come Dancing” — the precursor to America’s “Dancing With the Stars” — crowned a new champion in December: Rose Ayling-Ellis, a 27-year-old British actor who is deaf. It is hoped that her victory in the dance contest, during which she could hear only some music and had to rely on counting beats, will give the public a better understanding of deafness, and offer deaf children a boost of confidence.

Here on the South Fork, a young couple whose daughter was born hard of hearing are spearheading their own campaign to raise awareness of hearing-loss issues.

“The right terminology for Alice’s hearing loss,” said her father, Marcelo Reda, who is the director of operations of the Ross School’s summer camp and manager of its tennis program, is “moderate to moderately-severe sensorineural bilateral hearing loss.”

Perhaps the most comforting explanation of Alice’s condition came about three weeks after she was born, from Michelle Kraskin, an audiology specialist at Weill Cornell Medicine in Manhattan, who told Mr. Reda and his wife, Natalia Reda, that “ ‘Everything that you have said to your daughter, she heard. But she heard you very, very, very softly,’ “ Mr. Reda recalled.

“That made the biggest difference for us,” he said. “Especially for my wife, because, you know, you talk to your baby, you sing, you do everything, and you just hope they can hear you. Even if they might not understand you, but that they hear you. And just knowing that she could, even very softly, made a big difference. And that’s when we started our relationship with Weill Cornell, which has been amazing.”

Alice, (pronounced “Aa-li-si” in Portuguese — her parents are from Brazil), was born in April 2019 at Stony Brook Southampton Hospital, following an uneventful pregnancy and delivery. However, while she was a seemingly healthy baby, she did not pass routine hearing tests performed during her first three days in the hospital. Within a week, the parents saw a specialist in Southampton, who confirmed that the infant had hearing loss.

“Is she deaf?” Mr. Reda asked. What does “hearing loss” mean, he wanted to know. Unfortunately, the only explana tion the parents received from that doctor was on a piece of paper. “Literature on hearing loss for us to look at,” said Mr. Reda. “We left his office feeling really hopeless. My wife was crying and I was trying to hold it together.”

Whatever’s happening, he told his wife, “We’re going to figure it out.”

“The Listening Project,” a 2018 documentary film, underscores the importance of fitting babies born with hearing loss with some form of auditory technology within the first few weeks of life. This, according to Jane R. Madell, a pediatric audiology consultant and speech-language pathologist in Brooklyn, who is co-producer of the documentary, makes it possible for deaf children to hear, and to develop language skills as well as their hearing peers.

At Weill Cornell, the Redas were told that Alice was only able to only hear certain pitch frequencies, and needed a hearing aid. They were connected with the Early Intervention Program, a national program created in 1986 to help children under age 3 who have developmental delays and disabilities. In New York State, the program serves around 70,000 children each year, with conditions that range from autism to Down syndrome, and include hearing loss.

Services and programs, offered entirely free of charge, are based on the needs of the child and family. In Alice’s case, the state program, with four offices in Suffolk County, covered her $8,000 hearing aids as well as twice-weekly speech-therapy sessions.

She began speech therapy at just 3 weeks old, after the hearing aid was fitted. Mr. Reda remembered thinking, “Speech therapy for a baby? They don’t speak.”

“But it’s not just about speech. It’s about brain development, about connecting sounds to visuals, to behavior. And if you don’t tackle that early, there’s a high chance your child could be delayed for a very long time.”

Since his daughter is growing up bilingual, which can often further delay a child’s speech development, the Redas, who live in Wainscott, opted to pay out of pocket for additional speech therapy classes. The last time Alice was tested, Mr. Reda said, about two months ago, she was actually found to be six to eight months ahead, on the developmental curve, of a child her age with normal hearing.

Today, she attends the Harbor Waldorf School in Sag Harbor, twice a week. Mr. Reda said teachers and administrators have been extremely supportive, helping to educate other students and parents about Alice’s needs and her hearing aid.

Like other parents of toddlers, the Redas are dealing with all the usual obstacles, such as potty training. “That’s been a challenge,” said Mr. Reda, then added with a smile, “and all the usual tantrums and behavioral stuff. She’s just a normal kid.”

One question he and his wife often get asked is whether Alice’s hearing will improve over time. It won’t, he said, unless there’s success with ongoing million-dollar research programs, like the Hearing Health Foundation’s Hearing Restoration Project — the world’s first consortium to investigate the regeneration of sensory hair cells in the ear as a cure for hearing loss. “If something like that happens, then yes. But for now, our best-case scenario is that her hearing does not deteriorate.”

Alice’s parents provide support and help within the community to other families with children with hearing loss or certain disabilities. “We share our experience. Obviously, we don’t prescribe anything in particular,” said Mr. Reda. “We just let people know that this is what happened to us. And maybe just hearing that will help them help their kid.”

Free Car Seat Checks in Southampton
Battle of the Books, and More Fun for Teens
This Week's Happenings in Montauk
END_OF_DOCUMENT_TOKEN_TO_BE_REPLACED