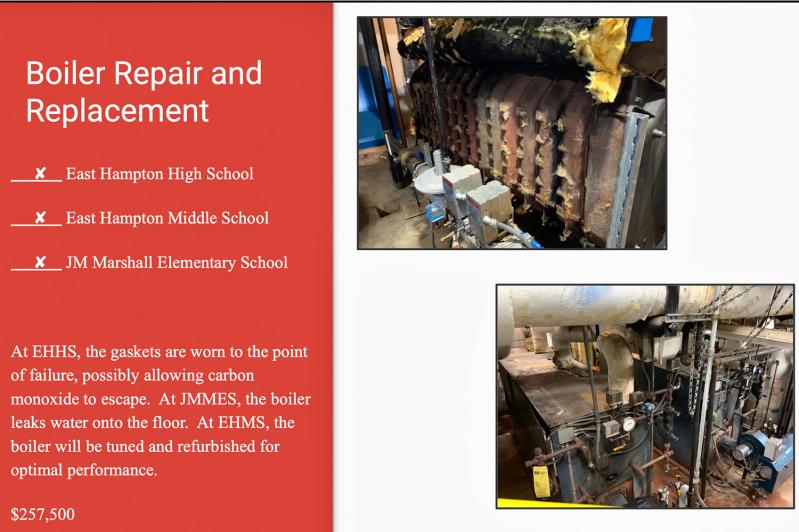 An ice maker that produces sludge, desks in disrepair, nonworking generators, chipping paint, an ‘unreliable’ gymnasium partition, worn-out carpeting and wood flooring — these are just a few items on a long list of facilities issues identified by the East Hampton School District this week as urgently in need of attention.

To that end, the school board voted unanimously on Tuesday to spend $994,993 from the district’s end-of-year surplus for repairs. The move allows administrators to expedite the fixes, rather than waiting for the next budget vote, in the spring of 2023, to allocate the money.

“Some of these things have been requested over and over again,” said Christina DeSanti, vice president of the board.

In a presentation before the vote, Sam Schneider, the district’s assistant superintendent for business, explained that these projects won’t cost taxpayers any additional money because it’s already been set aside in a repair reserve. In May, voters gave the district permission to create that new reserve fund. Over the summer, the school board voted to deposit $2 million left over from the 2021-22 school year into the account, which is capped at $5 million over the course of 10 years.

Before that money can be spent, state law requires districts to hold a public hearing to give the community a chance to weigh in and ask questions. It was held Tuesday ahead of the board’s unanimous vote.

Those words came up again and again as he listed the issues. In addition to the aforementioned problems, there are baseball and softball dugouts with rotting or rusty edges; worn-out fencing at all three campuses, chiller compressors and dehumidifiers that aren’t functioning properly, and automated external defibrillators that need new batteries or total replacement.

Of note is a plan to swap worn-out lobby doors and locks at all three school buildings with new, “hardened” replacements that are “designed to withstand firearms,” Mr. Schneider said. The cost for such peace of mind is $103,010.

Boiler repairs at all three campuses is another big-ticket project, at $257,500. “At East Hampton High School, the gaskets are worn to the point of failure, possibly allowing carbon monoxide to escape,” Mr. Schneider said. At the John M. Marshall Elementary School, “the boiler leaks wa ter onto the floor.” At the middle school, “the boiler will be tuned and refurbished for optimal performance.”

Several trees are in danger of falling or need trimming, a key safety issue. (Administrators have checked to make sure none are memorial trees.) And, in the high school’s family and consumer science classroom, a nonworking stove — an original appliance installed when the classroom was first built — needs replacement.

The issues were identified during an extensive survey of district facilities that is required periodically by the State Education Department.

“We may come back to you again this year with other projects, but this is where we are,” Mr. Schneider told the school board. He summed it up by calling the repair reserve “a great fund.”

“We’re lucky the voters approved it. We can accomplish projects without them becoming major capital project issues,” he said.

In other business Tuesday, the board took a step toward revoking its contract with Chucky’s Driving School, which provides driver’s education to students with learner’s permits. The company is reportedly having trouble meeting the district’s increased insurance requirements.

The board gave the driving school until January to obtain the required coverage. In the interim, the instructor is doing classroom lectures only, with parents providing the hands-on driving practice.

District Superintendent Adam Fine called the instructor “an excellent teacher,” but said the district wanted to have a little more “peace of mind” when students are behind the wheel. Ultimately, he said, during the coming budget cycle, East Hampton will explore bringing the driver’s-ed program back under the umbrella of district operations rather than hiring an outside service provider.

“There is getting to be no other option,” Mr. Fine said.

Also at the meeting, Charles Soriano, principal of the East Hampton Middle School, reported that its Science Olympiad program has grown in enrollment over the last eight years from a handful of students to a diverse group of 31.

Science Olympiad is a wildly popular national competition, with more than 5,000 schools across all 50 states participating in regional events, state championships, and local contests. The program tests students’ knowledge and problem-solving skills in engineering, biology, earth science, coding, chemistry, and other disciplines.

“This relatively young team is competing against well-established teams from UpIsland” that have dominated the competition for 30 years, Dr. Soriano said. “Our team has been doing increasingly well, placing in first, second, and third in some of the categories.”

“It’s really fun to watch our students compete against the other schools and make friendships with students there,” said Brian Smith, a teacher who is one of the club’s four advisers.

Nick Finazzo, another adviser, said Science Olympiad has “something for everyone. . . . We have these awesome, awesome successes, and look forward to having more.”