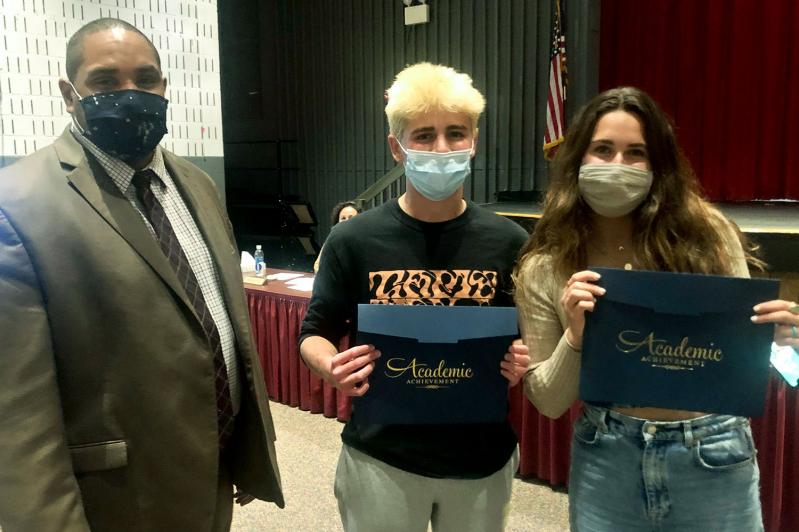 The announcement on Tuesday of East Hampton High School's valedictorian and salutatorian also signaled that the school district is in the thick of plans for end-of-year commencement ceremonies.

The valedictorian, Benjamin Barris, bound for Dartmouth College in the fall to major in mathematics, and the salutatorian, Anni Spacek, who will study film at a school yet to be determined, are two of the 233 seniors who will graduate on the morning of Saturday, June 26, in a ceremony to be held outdoors on the high school football field. Students will be in the bleachers, while family members or friends — limited to two guests per senior — will sit in chairs on the field.

State health guidelines are constantly shifting. As of now, the graduates will no longer be counted toward the capacity of a venue, said James Crenshaw, the high school principal. With regard to social distancing, he said his job is made a little easier thanks to the lines already painted on the football turf. "Two yards equals six feet — it's a built-in ruler!" he exclaimed after Tuesday's meeting.

The district will mandate proof of a negative Covid test or full vaccination series, or an affidavit that an individual has been in isolation, for a certain period of time, for guests to attend the graduation. Guests will also be asked to R.S.V.P., in order to create  "a clear list for contact tracing," Mr. Crenshaw said.

In case of rain, the ceremony will be held either later in the day or the day after. (However, school officials, having apparently consulted the entities in charge of the weather, have already said there won't be any rain.)

"We're still working on the finer points of it, but it's going to be a graduation to remember," Mr. Crenshaw said.

Ben and Anni's long lists of achievements earned them high praise during Tuesday's school board meeting. "These are two very special people," the principal said. "This is not a normal time. You get extra credit for doing it in a pandemic, rising to the top at a time when it is super difficult to rise to the top. Kudos to you for not letting anything get in your way."

Adam Fine, serving as acting East Hampton Middle School principal while Charles Soriano is on leave, told the board that the eighth-grade graduation will also be in person; if not in front of the school, then possibly across the street at Herrick Park. "We'll probably shut down Newtown Lane. We've had some discussions with the village on that," he said.

Karen Kuneth, principal of the John M. Marshall Elementary School, also announced on Tuesday, in an email to parents, that there will be an in-person moving-up ceremony for the fifth grade. It is "a milestone all of our students look forward to, and although there will be some changes in the ceremony from years past, we look forward to a momentous morning program," she wrote. She noted that there will also be a small celebration for the prekindergarten.

Also during the school board meeting, Jake Epstein, president of the senior class, called in to request that the district find a place off-campus for a senior banquet, rather than hold it under a tent at the school. He said he had discussed it with other students, and "a lot of them were wondering what I need to do, what we can do, to get approval on a place where we can go to host a banquet."

Cheryl Hartsough, whose daughter, Hannah Hartsough, is a co-president of the Student Association, called in to suggest looking at the Clubhouse in Wainscott as a possible venue. "It would be much better for them to be not at the school. . . . We can make this happen," she said.

"It's something we can look at and see what the possibilities are," Mr. Crenshaw replied.

In other East Hampton school news, Mr. Fine said that the double-masking policy at the middle school is being revisited as the weather heats up. That standard had been mandated when fully in-person teaching was instituted at the start of April. "We did discover we are the only school in Suffolk County that is requiring double-masking," Mr. Fine said.