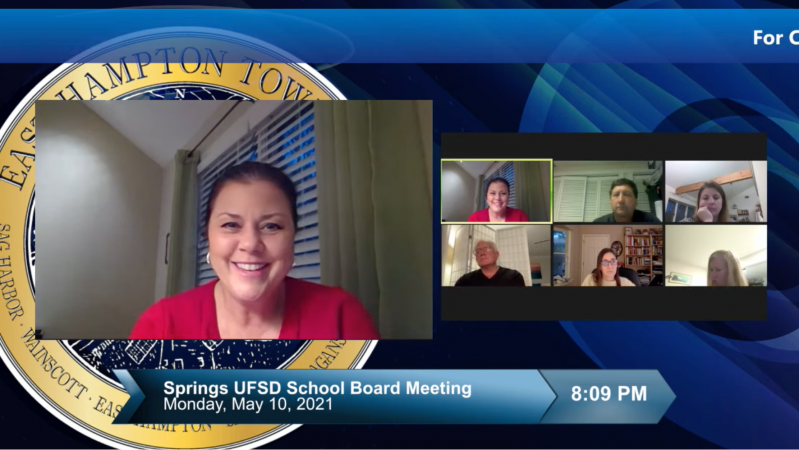 Christine Cleary, left, is the principal of the Springs School.
LTV
By Christine Sampson

There are both pros and cons to keeping an eight-period day in place or retooling the daily schedule for nine periods, Springs School District administrators said Monday. A lively work session debate drew input from several teachers and school board members alike, all of whom said they wanted further discussion before any decisions are made.

Christine Cleary, the school principal, said the aim is to identify what would best provide for a "well-rounded, needs-based, high-impact learning experience" for all students. The immediate goal, she said, is to "evaluate where we've been and nail down where we want to be."

In the revamped eight-period plan, the sixth graders would join the seventh and eighth graders on the "A/B" system, alternating certain classes every other day, and would have Spanish lessons added into their schedules. Much would otherwise remain the same, such as the 8:30 a.m. arrival time, 3:11 p.m. dismissal time, 49-minute periods, and two consistent lunch and recess sessions.

A nine-period plan, "which we had many moons ago at Springs School," Ms. Cleary said, would allow more flexibility in scheduling. Arrival and dismissal times would remain the same, but periods would be shortened by six minutes each to carve out time for that ninth period. Lunch and recess would be spread over three periods instead of two, which means a more favorable staff-to-student ratio when kids are being supervised on the playgrounds. There would be more room for creative and innovative classes such as civics, technology, and social-emotional development or "executive function" courses, and the elementary school kids would have more time for Spanish language lessons.

By way of the "pros" of an eight-period schedule, Ms. Cleary suggested it might be good to enact fewer changes.

"Everybody has had so much change in the last year and a half that it might be nice to decompress, keeping things as-is." The longer instructional periods are also beneficial, she said.

But a "con" is that in the current eight-period schedule, children in kindergarten through fifth grade do not meet state requirements for physical education, though that could change when the new gymnasium comes online after the district's major construction project is finished. A nine-period day would automatically build in more gym time for the elementary grades. Another "con" of the current eight-period day is that seventh and eighth graders in both remedial classes and enrichment classes do not have room for art and music in their schedules. Ms. Cleary said that would also change if students were to have nine periods.

Tim Frazier, a school board member who for many years was the principal at Southampton Intermediate School, said it's "a no-brainer that you have to go to a nine-period day because of all the things you're mandated to deliver."

"You'll be able to give more equitable time to both K to five and six to eight. . . . You could even do some specials all year long if you wanted to. I do think the three lunch periods you'll find to be amazing," he said.

"Whatever plan you're going with," said Barbara Dayton, the school board president, "we've got to get the correct amount of phys ed" for the elementary kids. "Now that we have the space for it, we need to deliver on it. . . . To me, it feels like we must do that."

Most of the commenters on Monday were Springs School teachers. Monique Sullivan, who is both a Springs School teacher and a parent, called in to say she supports the eight-period day. "Students have the ability to do more things with one subject. There's more time for one content area — we can devote more time to a hands-on lesson."

In a nine-period day, special education service providers would "have less time with the students. It's such a crucial thing, especially with all the instructional time we did lose with Covid restrictions," Ms. Sullivan continued. "This allows less time for planning, and it's a lot more difficult to pull off carefully detailed lessons because we're losing a significant amount of planning time as well."

Cristen Keyes, also a Springs teacher and parent, called in to point out that during the pandemic, Spanish lessons went by the wayside for the elementary kids. "At this point, I feel very concerned. It feels like programs are being cut for the K-to-five students. I think it's important that we do keep a variety of specials to be competitive with our neighboring districts. Foreign language is very important, even once a week . . . I would love to see that returned."

Also on the table is a separate proposal to take one Friday per month and make it a half-day for students to allow for teachers to have dedicated time for lesson planning and professional development. This too has pros and cons, administrators said. Notable among the challenges, they said, would be supporting students during the afternoon with activities such as intramural sports, assemblies, or pep rallies, and arts, science, or civics activities through partnerships with local nonprofit organizations. It would impact eight to 10 Fridays per school year.

"Ongoing professional development is mandated" by New York State, Ms. Cleary said. "It has always been proven [to be] a significant factor in student achievement."

The plan would save Springs money on substitute teachers, she said, by grouping teacher planning and coaching, rather than sporadically pulling out individual teachers from their classrooms during the school day.

"Having this time built in will help build collegiality among the K-to-eight staff," Ms. Cleary said. "Everyone's willing to always chip in and go the extra mile, but we don't always have time to communicate with each other at different grade levels, so that alignment piece gets a little cloudy because of the time constraints."

Kristi LaMonda, a Springs teacher, called in to lobby for technology instruction and to raise concerns over the teachers' contract with regard to the nine-period day and monthly half-day for planning. She said the nine-period day was discontinued in part for financial reasons. However, she said, "I think there's great opportunity there and I'm excited to hear this out-of-the-box thinking."

Ms. Dayton requested more data on how often substitute teachers are called in to help during existing development sessions. "There's a lot of food for thought here. To me, the issue with having one half-day a month is how that affects parents and affects kids in after-school programs. . . . It seems like there would be some logistical problems working with our students and families and sports."

She said either way, Springs has "some very exciting times ahead."

"We can certainly try different ways to do things and figure out what works best for our students and our staff," Ms. Dayton said.