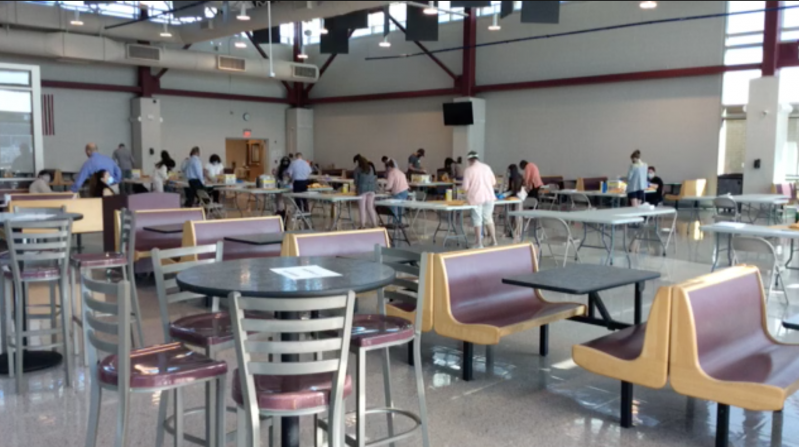 As school officials began tallying the school budget and board member votes on Tuesday, it became apparent that the absentee ballot system boosted voter participation almost across the board, in many cases buoying budgets to easy pass rates.

However, there was a cost: Officials in many districts, including East Hampton, Bridgehampton, and Springs, reported spending between 50 percent to 300 percent more than they would have in a normal election year. And a fair amount of confusion over mailing addresses and the sheer volume of mail put more stress on an already overwhelmed postal system which, for a whole week, was the only way ballots could be submitted. The deadline to submit ballots was extended by a week, from June 9 to June 16, but drop-off ballot boxes were withdrawn on June 9, so ballots filled out after that had to be put in the mail.

"It was a huge expense," said Debra Winter, the Springs School District superintendent. "Almost 3,000 ballots either didn't get returned or were returned undeliverable."

Robert Hauser, the Bridgehampton superintendent, said he was "very impressed with how the vote went. I think you're going to see more of it." But unlike in other South Fork districts, Bridgehampton saw voters participate at an almost identical rate to last year, which he said surprised him.

"To me, it more or less justifies moving forward with a lot of these ideas because they are not failures in the sense that people may have assumed they would be," he said. "They are alternatives, and they work."

In East Hampton, 80 percent of voters approved a $71.98 million budget proposal. The plan contained money for a new turf athletic field at the high school, renovations to the middle school auditorium, and projected a tax rate increase of less than .5 percent.

Voters also approved a separate proposition, giving the green light to the district's $2.2 million plan to build a new teaching kitchen for a culinary arts program at the high school. The district already had the money set aside in a reserve fund. It was approved 882 to 280.

"I'm thrilled with the community support, especially for the kitchen project," Richard Burns, the East Hampton superintendent, said on Tuesday. "I promise we will make a meaningful program for our students to help teach skills and keep them in our community."

In a contested East Hampton school board race, Jackie Lowey and John Ryan Sr. were re-elected, with 874 and 856 votes, respectively. George Aman, a former board member, earned 426 votes but lost his bid to return.

In Springs, a bare-bones budget of just over $30 million passed by a healthy margin, 729 to 319, with just under 70 percent voter approval. School officials had said they pared spending increases down to just 1.2 percent, and the community supported it.

A proposition to purchase a new school bus at a maximum cost of $135,000 also passed, 734 to 301, and a new, five-year tuition contract with East Hampton for the high school students was approved.

"I am so grateful to the Springs community for their support," Ms. Winter said. "Our students are deserving of every vote. We can now focus our energies on our re-entry plans for September."

Tim Frazier and Pat Brabant, both incumbent Springs School Board members, ran unopposed to retain their seats and were re-elected with 874 and 883 votes, respectively.

Notably, the Wainscott School District was successful in its attempt to override the state-imposed cap on tax levy increases for the second year in a row. Its $3.7 million budget, which carried a 12.71 percent increase in the tax levy, passed 73 to 36, giving it the necessary supermajority of at least 60 percent voter approval.

In the Bridgehampton School District, the $18.98 million budget plan passed with approximately 72 percent voter approval (262 to 102). School officials had described it as a "conservative budget" that preserved existing programs and services but pushed pause on new expenses and initiatives such as the Advanced Placement Capstone program the district had hoped to implement.

"I believe that's important in the eyes of the community. It's a very fiscally responsible budget," Mr. Hauser said. "We're watching the numbers diligently, keeping an eye on the reserves, and aligning the budget with the times. This is an extraordinary time right now."

Kathleen McCleland and Markanthony Verzosa were the Bridgehampton voters' choices for the two seats on the school board, with Michael Gomberg in third place. Ms. McCleland received 328 votes, Mr. Verzosa 248, and Mr. Gomberg 121.

The tuition contract, identical to the ones in Montauk and Springs and also including middle school students, was approved. In the contested school board race, Kevin Warren and Meredith Cairns won seats on the board. Mr. Warren received 189 votes, Ms. Cairns had 205, and Kim Slicklein, the third candidate, had 156.

In Montauk, the $20.87 million budget proposal passed, 496 to 81. Its passage means the district can move forward with replacing the temporary classroom wing built more than 30 years ago, at a cost of about $1.3 million.

The new tuition contract with East Hampton for the high school students also passed, 539 to 36.

Diane Hausman was running unopposed to keep her seat on the board. Five different people received write-in votes, but not enough to unseat Ms. Hausman.

"I would like to thank the Montauk community for the overwhelming support, especially in these times," Jack Perna, the Montauk superintendent, said. "We have a dedicated school board and an amazing faculty and staff. We also have parents and community members who have taken on so much the past few months, God bless them all. Be safe and stay healthy, everyone."

In a hotly contested school board race, five candidates were seeking three seats on the board. The successful candidates were Sandi Kruel, Brian DeSesa, and Alex Kriegsman. Mr. DeSesa was the top vote-getter with 1,155 votes, Ms. Kruel had 1,151, and Mr. Kriegsman had 1,127. Ronald Reed received 891 votes and Helen Roussel received 810. Close to 40 people received at least one write-in vote.

New on the ballot this year for Sagaponack was a contract with the Bridgehampton School, offering the option for children to attend fourth through 12th grades there. After much lobbying by parents, the fourth through sixth grade contract was approved 95 to 13 and the seventh through 12th grade contract was approved 96 to 15. Agreements with the East Hampton and Sag Harbor School Districts were also approved.

Thomas Schultz, a newcomer to the school board, ran unopposed and was elected with 92 votes. His term will begin July 1 and run through June 30, 2023.