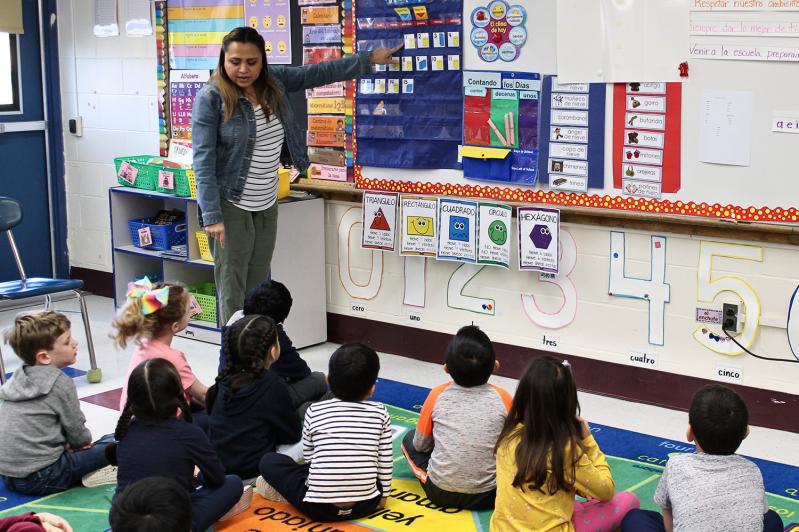 A college professor visiting Shanghai recently marveled in The New York Times about the Chinese 2-year-olds he’d seen reciting the “Humpty Dumpty” rhyme with ease. “To speak a second language from childhood is to have a more capacious brain and a larger connection to the world,” Perry Klass wrote in The Times in January.

In Arizona, where state law forbids schools from splitting kindergarten-through-12th grade classroom time between English and Spanish languages unless a special waiver is in place, the Osborn School District started a prekindergarten program in which half the day is spent learning in each. “Nationally, two-way immersion has produced strong academic outcomes. Our initiative was no different. Preschoolers showed considerable growth over the school year,” Michael Robert, that district’s superintendent, wrote in the Arizona Capitol Times last month.

And here in East Hampton, educators are getting ready to expand a pilot kindergarten program in which half the school day is taught in English and half in Spanish, citing success better than they could have projected.

“It’s exceeding our expectations,” said Beth Doyle, the John M. Marshall Elementary School principal. “I didn’t think that in this short time we’d be this far along. They’re happy, they’re learning. And it’s still kindergarten, so we build in a lot of play time.”

Forty-two of John Marshall’s 68 kindergarteners are enrolled in the program, including both native and nonnative English speakers. During a recent visit to the kindergarten wing, two identical posters illustrating vocabulary having to do with weather — one version in English, one in Spanish — were just the first sign that every effort is made to connect the two languages.     It was around 9 a.m. on a Thursday, and the children were practicing their numbers. Catherine Gibbons was using straws for an English-language lesson on ways to make 10. And in Marcela Cardona’s class, children were counting by 10s in Spanish. Kids in both classes were seated on the floor on brightly colored rugs.

Rows of letters and numbers are lined up on the walls above and below the whiteboards. Classroom rules are written out in each room’s respective language. Vocabulary words are on posters everywhere. “Please” and “thank you” — “por favor” and “gracias,” “blue” and “azul,” “book” and “libro.”

“We have to work very closely together,” Ms. Cardona and Ms. Gibbons agreed. “Our entire day needs to be in sync for the students to be successful.”

Halfway through the day, it was time to switch classrooms. Each group lined up by the door, then they walked across the hall, waving to their friends and peers as they went.

In Ms. Cardona’s classroom, she exclusively speaks Spanish to the children. It’s part of “language fidelity,” a term referring to the commitment to structure and routine for each. Students often answer Ms. Cardona in English rather than Spanish — but they understand the questions being asked of them.

“In the beginning, the students were quiet and hesitant to make attempts using the language,” Ms. Cardona said. “Within the first month, students were responding to directions given in Spanish and making attempts to communicate using Spanish.”

Experts say there is typically “a period in which the students’ performance is behind that of their peers that are not in a dual language setting,” Ms. Gibbons said. “We currently are not seeing a lag in student performance.”     Then there’s “bridging.” After the teachers finish each unit, they gather all the students together in one room and review the material in both languages to make sure everyone understood the concepts.

“For the most part, language practitioners are on the side that before puberty there’s something called plasticity of the brain that lends itself to learning a second language,” she said. “The brain is more flexible and it’s apt to learn easier. Not to say older kids can’t learn it, but younger kids seem to do so more easily.”     The goal, she said, is to continue John Marshall’s dual language program to the first grade next year, and roll out a new grade level as this pilot class moves on, up to fifth grade.

John Morocho enrolled his daughter in the dual language program because he knows firsthand the benefits of being fluent in two languages.     “She loves it,” Mr. Morocho said. “A lot of the homework is in both languages, so it gives her a chance to speak both languages at home. We believe the ability to be bilingual will be an advantage later on.”

Just about the only challenge, she said, was finding culturally relevant, “authentic texts” for the children to read in Spanish. “A book about playing in the leaves in the fall is not going to make sense,” she said.

“I’m not trying to sugarcoat this,” Ms. Doyle told the East Hampton School Board on Tuesday. “It’s going really well.”

For prekindergarten parents who want to know more about the program, there will be a meeting on Feb. 26 at 6:30 p.m. at the school. Applications will be due by March 31, and will be distributed both at the school and on the district’s website, easthamptonschools.org.

“My daughter goes to school happy and comes home happy, and is excited to show me everything she learns” in the dual-language classes, said Amy Falkenhan, who teaches fourth grade at John Marshall. “I cannot say enough positive things about the program.”