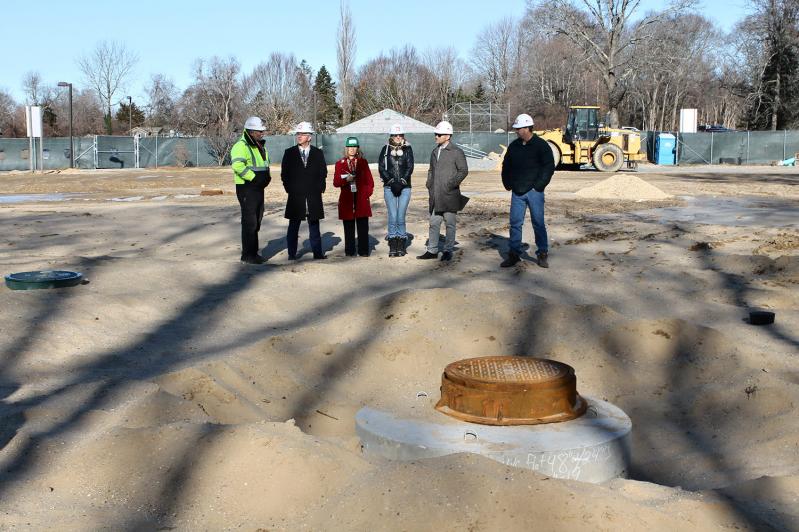 There was no official “first flush” fanfare, but instead a simple announcement on Twitter last Thursday that the Springs School had turned on its newly completed innovative/alternative septic system while the students were on winter recess.

“It’s all hooked up,” Debra Winter, the school district superintendent, said by phone this week. “The real test will be seeing what it looks like by the end of the week. They ran a test on Friday just using water, but it’s cumulative. The more the system gets used, the more accurately you see how it’s working.”

The Springs School system is the first of its kind in a school district on Long Island and possibly even in New York State, according to Chris Weiss, a vice president with H2M, the engineering company overseeing the installation. He said the project was a little bit more challenging than initially anticipated because of difficult conditions on school grounds.

“We’re very excited about it,” Mr. Weiss said Tuesday. “Everybody’s done a great job getting it in and working around school being in full activity. It’s a great accomplishment.”

The system’s capacity is 5,000 gallons of wastewater per day.

“It’s a really good model, but I would say we will really need this school season and next school season to really give honest justification to the results,” Mr. Weiss said.

The system, originally expected to cost $1.5 million, faced cost overruns of at least $200,000 when crews encountered difficult soil conditions while digging into the ground to install the new system. The majority of the cost was covered by grants Springs received from New York State and East Hampton Town, including $227,272 from the community preservation fund as recommended by the town’s water quality technical advisory committee last month.

The next step, Mr. Weiss said, is removing the old septic system. It will be pumped out, and the crew from Keith Grimes Inc., will pull the antiquated tanks out of the ground. Then, the area will be filled in so the school district can proceed with its next phase of construction — adding six classrooms, a gymnasium, a science lab, a technology room, and new soccer and baseball fields. For that phase, Ms. Winter expects the district will formally publish a request for construction bids from contractors next week.

Along with the new septic system, the district also had a new roof installed on much of the existing building. That, too, is complete, Ms. Winter said.

“It’s very exciting and at the same time a little nerve-racking with how big this project is,” she said. “With limited space, there’s not a lot of places to shuffle things around.”

She said she is confident the new septic system will function as intended.

“It’s going to be watched closely,” Ms. Winter said. “Everybody wants to see just what the impact is on the environment. We’re going to be very transparent with everybody.”

A group of fifth-graders is hard at work on a model of the new septic system that will help students understand how it works.

“We’ll put in a display case so all the classes can see it and explore it — ‘This is what you have outside in the backyard,’ ” Ms. Winter said.