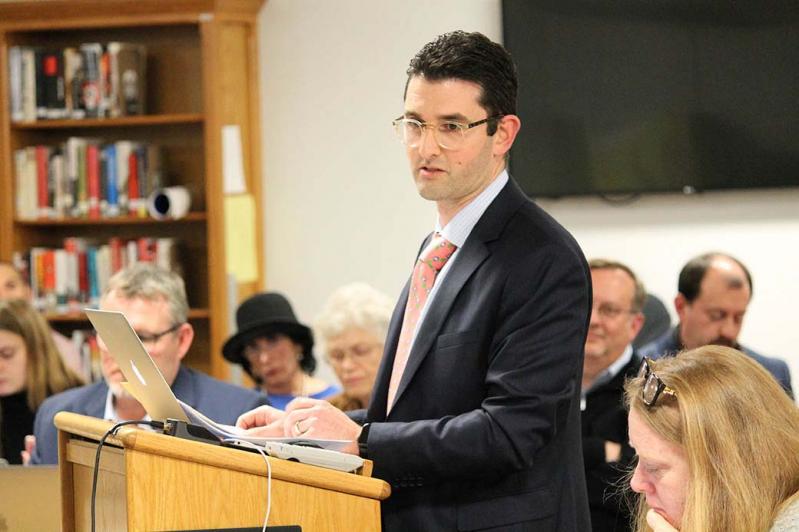 Dr. Steven Sobey, a urologist based in Southampton and a Sag Harbor parent of two, spoke up on Jan. 13 in support of state legislation that would mandate the human papillomavirus vaccine for students.
Christine Sampson
By Christine Sampson

The Sag Harbor School Board on Jan. 13 declined to take a formal stance on proposed state legislation that would mandate the human papillomavirus vaccine for students — but not without a discussion of whether or not it is even in the board’s purview to take on such matters.

The discussion recalled one from a meeting in August in which Sag Harbor School Board members, urged by a group of parents, voted 4 to 3 to allow the district superintendent at the time, Katy Graves, to send a letter to a state judge suggesting that the court slow down the implementation of compulsory vaccines for schoolchildren. Ms. Graves announced the next day that the district would not be sending that letter, citing advice the board had received from the school attorney.

Whereas the previous issue was about early-childhood vaccinations such as those for measles, mumps, and rubella, the HPV vaccine discussion took on a slightly different tone because it prevents a sexually transmitted infection, the effects of which often include cervical cancer and other reproductive complications.

At the Jan. 13 meeting, some medical professionals weighed in on the HPV vaccine. “In medicine,” said Dr. Steven Sobey, a urologist who lives in Sag Harbor and practices in Southampton, and who has two children in Sag Harbor’s school system, “we say that there is nothing better for health than prevention.”

“Immunizations, therefore, are the most effective and miraculous medicines that have ever been developed,” Dr. Sobey continued. “They have successfully prevented deadly diseases as well as prevented lifelong effects of these severe infections. And they are safe. Fortunately, most of us have no experience witnessing the effects of these diseases because of immunizations. In fact, the vast majority of doctors have only read about these diseases when they [were] in medical school. Cervical cancer, however, is a devastating disease with continued prevalence, but it can now be largely prevented with an immunization.”

Dr. Harriet Hellman, who resigned her position as the Southampton School District’s chief medical officer over the letter that district wrote opposing a mandatory HPV vaccine, also spoke up on Jan. 13 in support of vaccines. A cancer survivor herself, Dr. Hellman told the school board that her father and an uncle had had polio, and that her parents “didn’t take my sister and I to public places because of the risk of polio, particularly in the summer.”

“Herd immunity is what we get from vaccines. . . . It saves lives,” she said.

She and Dr. Gail Schonfeld, Sag Harbor’s chief medical officer, signed a letter that supported the HPV vaccine, though they did not take a position on the possibility of the state making it mandatory. “We are both parents and while we understand the logic behind mandating the HPV vaccine to achieve public health goals for herd immunity, we also do have difficulty with the concept of mandating the vaccine for school attendance as it is not a vaccine that prevents a school-acquired illness. . . . However, we are strongly supportive of vaccination of infants, children, adolescents, and adults as a scientifically proven method to prevent illness and to save lives.”

Jordana Sobey, the school board president and an attorney who is married to Dr. Sobey, read a letter from Dr. Louise Collins, a local gynecologist. “The HPV vaccine can prevent over 90 percent of HPV-related cancers. It is a safe and effective vaccine,” Dr. Collins said in the letter. “Giving the vaccine prior to age 15 requires only two doses and gets a higher immune response than when given later. It is optimal to receive the vaccine prior to onset of any sexual activity. Since many teenagers initiate sexual activity during high school years, it is imperative that we give them the tools they need to protect themselves.”

At the meeting, the conversation eventually turned to whether it is advisable for the board to take a stance on legislation that would mandate the HPV vaccine for children. The topic appeared on the official agenda that night at the request of Chris Tice, a board member.

“Many states have come out against it. It’s not whether I’m advocating for or against it,” Ms. Tice later said. “Public school districts are being used as a leverage point. It’s like saying your kids can’t come to school unless you’ve paid your taxes. I think it’s an overreach . . . and a very slippery slope.”

Alex Kriegsman, the board’s vice president, disagreed with Ms. Tice’s position that the board should write a letter to the state. “I don’t see why we’re taking positions on pending legislation in Albany. I respect everyone’s opinion on the issue, but I don’t see why it’s appropriate for a school board to get involved in such a decision.”

Ms. Tice pointed out that the board has a legislative liaison, and that it has taken positions in the past. “We did it with the No Child Left Behind legislation, or the tax cap. One of the roles you have as a board is advocacy, including legislative advocacy,” she said.

Other board members, including Diana Kolhoff and Susan Schaefer, agreed with Mr. Kriegsman. Ms. Sobey said she questioned whether to even put the topic on the table. “I felt like it was almost irresponsible to have this on the agenda,” she said.

“I thank Chris for putting this on the agenda because a key component of being a board member is legislative action,” said Brian DeSesa, another board member. A two-time cancer survivor, Mr. DeSesa said he did not want to take a stance on this particular issue.     “I absolutely respect that the board isn’t supportive of it, but having a public discussion, I think, is helpful,” said the board’s Yorgos Tsibiridis.

Michelle Liot, a Sag Harbor parent, told the board she was “profoundly disheartened” that it ultimately decided not to take a stance. “If this isn’t an issue for a school board, then what is?” she said. “It’s a barrier to our children’s education. It’s huge.”