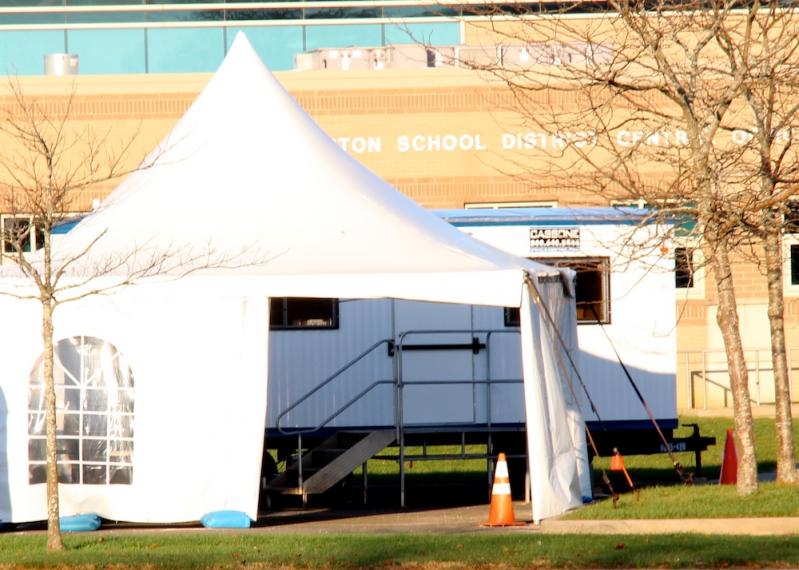 A Covid-19 testing site on the East Hampton High School campus is open to the entire community, not just the school.
Durell Godfrey
By Christine Sampson

A Covid-19 outbreak in a school can impact the community, and an outbreak in a community can impact its schools. So goes a circle that school officials here are keeping their eye on — while still planning, in some cases, to bring back more students for in-person classes.

At the Springs School, for instance, 22 special education students in kindergarten through fifth grade returned this week, coming off the hybrid learning plan. In that hybrid plan, two groups of students, an A group and a B group, each attend school for two days and learn remotely the other two days, with classes all virtual on Wednesdays. The plan at Springs is to return all students in kindergarten through second grade on Dec. 11, grades three to five on Jan. 15, and grades six to eight on Feb. 8.

And at East Hampton High School, James Crenshaw, the principal, said approximately 70 students in special education and English as a new language programs are now in school five days per week instead of two in the high school's otherwise hybrid model. And around 50 general education students who were initially on the fully remote plan have opted into the hybrid program for the second academic quarter.

While Springs has seen only two cases of Covid-19, East Hampton High School has had at least 16 — the district has had at least 29 cases in total — as of Monday, according to the School Covid Report Card, a state database of virus cases that is supposed to be updated daily.

"School districts have to play a key role in keeping the community up and running," said Debra Winter, the Springs superintendent, during a school board meeting on Monday. "This is where as a school district we need to take this really seriously. A school district whose numbers are up could actually shut down local businesses or an entire community."

Richard Burns, the East Hampton superintendent, said during Tuesday's school board meeting that "the point I'd really like to make again is there is no spread at all within schools." Rather, he said, it appears the cases are originating outside of school.

"I think we're really on top of things. We work as hard as we can," he said.

In October Gov. Andrew M. Cuomo instituted a zoning system in which areas with virus microclusters would be classified in increasingly severe categories of yellow, orange, or red. In red zones, schools shut down entirely to in-person classes until virus numbers decrease again.

In an email to The Star, Mr. Burns explained that for Suffolk County to be declared a yellow zone, the region has to have a seven-day rolling average of its positive test rates above 2.5 percent for 10 days. That rate is measured as the number of new Covid-19 cases as a percentage of the total number of tests administered over a 24-hour period. To be declared a yellow zone a region must also have 10 or more new daily cases per 100,000 residents on a seven-day average.

If current trends continue, Suffolk County's positive test rate will exceed 2.5 percent for 10 days by Thursday. According to data from New York State, the seven-day average was 3.2 percent last Thursday and was at 3.4 percent on Friday, Saturday, Sunday, and Monday (the most recent day for which data were available as of press time). Also, with Suffolk County's 1.4 million residents, an average of 140 new cases per day for seven days would figure into a yellow zone declaration. On Monday alone, there were 402 new, confirmed cases of Covid-19 in Suffolk.

In schools in yellow zones, classes can still be held in person, but schools would be required to randomly test 20 percent of students, teachers, and staff members over a two-week period. East Hampton has a testing site located on its high school campus that is open to the entire community, not just the school.

"We currently have 1,783 students, staff, and teachers in person in the district, which would mean about 356 tests per week that would be mandated by New York State," Mr. Burns said. "We have been in talks with Stony Brook Southampton Hospital about the logistics of testing if we meet these thresholds."

An orange zone means the seven-day-average positivity rate is above 3 percent for 10 days, along with the criteria that there is a seven-day average of 10 or more cases per 100,000 residents. (Suffolk County appears on track to meet those thresholds by Saturday without a dramatic reduction in cases.) A red zone means the average positivity rate is above 4 percent for 10 days; the same seven-day average of new cases also applies.

Jeff Nichols, the Sag Harbor School District superintendent, said during a school board meeting on Monday that he doesn't see the numbers going back down anytime soon. His district has had four cases of Covid-19, resulting in quarantine for 22 students and five staff members.

The current thought in Sag Harbor "is we stay on the path we're on and be prepared as a community that this could change rapidly," Mr. Nichols said. Classes could remain in person for now but "it could be a different assessment in a few days."

Tim Frazier, a Springs School Board member, said Monday that "The upcoming months, especially after the holidays, will be hard to predict. . . . We have to be flexible, be open, and monitor closely the rates and stay within the guidelines from the Centers for Disease Control and Health Department. We want to be as safe as we have in the past, if not more, during this critical time."

Trees, Wreaths for Sale in Amagansett
Holiday Cheer Is Coming to Sag Harbor
Even More Thanksgiving Options From the Pike and Old Stove
END_OF_DOCUMENT_TOKEN_TO_BE_REPLACED