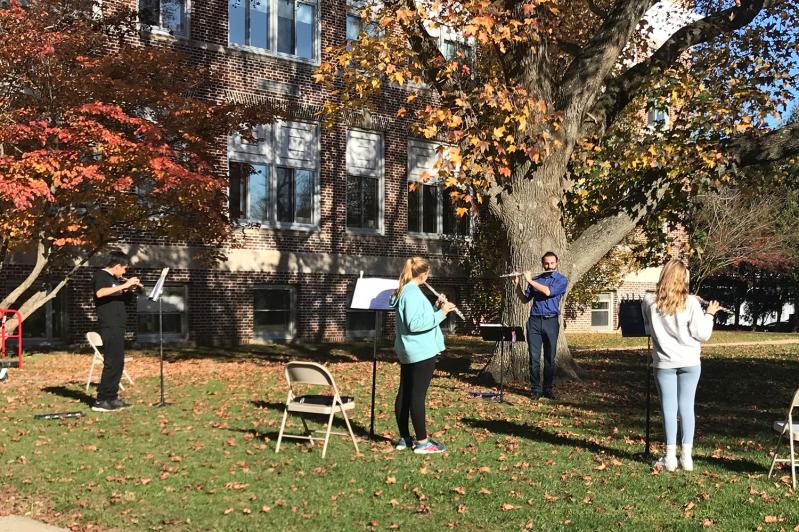 Tye Granger, a music teacher at the East Hampton Middle School, offers class outside on nice days like Tuesday. The school district is asking parents of middle schoolers to decide by today whether their children will opt for in-person or distance learning for the next 10 weeks.
Jane Bimson
By Christine Sampson

Bridgehampton School administrators are floating a plan to bring back students in seventh through 12th grades for in-person learning — but will any families take them up on it?

Officials in the East Hampton School District are asking families once again to choose between online learning or in-person classes — but will a recent increase of Covid-19 cases impact parents' preferences?

East Hampton and Bridgehampton are among the school districts that are using online surveys to gauge how their families are feeling about school attendance these days.

"It's tough to plan different versions of how we want to do things going forward. . . . It's a tough situation if you have a family member who for whatever reason may be at risk for Covid," James Crenshaw, the East Hampton High School principal, said during a Nov. 3 school board meeting.

The high school is asking its families to commit to 20 more weeks of in-person classes or 20 more weeks of distance learning, taking students through the third academic quarter. Initially, the enrollment commitment was to be 10 weeks at a time, but administrators found that didn't give them enough time to adequately plan. They are also weighing whether it's possible to institute more in-person days for students who chose that option for the first quarter.

At East Hampton Middle School, parents have until today to make a commitment to either format for another 10-week quarter. "There are no right answers here — just a right answer for you and your middle schooler. We will support either choice," Charles Soriano, the school principal, said in an email to parents.

Currently, East Hampton's high school and middle school students have a hybrid attendance model in which they attend school for two days in alternating groups and have three days of online learning. Not much would change for students who are already on the fully remote plan.

At the John M. Marshall Elementary School, which breaks the year into trimesters, the majority of students have been attending classes in person. The school's parent survey closed Tuesday. Karen Kuneth, the interim school principal, said it was necessary to gather more information to be able to maintain continuity of both the in-person and online programs.

"The remote classrooms at the elementary level are . . . functioning like a true classroom setting," she said. "It is almost disruptive when kids are coming in and out and in and out of that remote setting."

In contrast to the 20-week commitment at the high school, the elementary school is taking it one trimester at a time, particularly in light of the winter months. "We'll send another survey out four or so weeks before the end of the second trimester," Ms. Kuneth said. "I hope by then we'll be in a different situation."

As Covid-19 cases popped up with more and more frequency in East Hampton over the last two weeks, it is unclear how heavily the virus will impact parents' decisions. The district has now had at least 16 cases, covered elsewhere in today's Star. Ms. Kuneth said on Tuesday that going by the survey responses received so far, there seems to be a preference among families to stick with what they chose for the first trimester.

But parents seem to want more information, too.

"I've spoken with many parents and obviously had to make these considerations myself," Dianne Le Verrier, an East Hampton parent of two, said during the Nov. 3 school board meeting. "I know there is a difference between the considerations parents will make for a hybrid model, which seems safer versus a five-day plan. . . . Maybe more parents would opt out if it was a five-day plan. They need to know what they are opting in or out for."

In Bridgehampton, where the seventh through 12th graders have been fully remote since March, there are more variables in play because of the district's ongoing $29.4 million expansion and renovation project.

Robert Hauser, the district superintendent, said the plan hinges on the completion of five new classrooms on the second floor, which still need water lines for the fire sprinklers and a final sign-off by the Southampton Town fire marshal. Also, he said, there are three new temporary classroom trailers on campus for the secondary students, but those also need utility hook-ups. The Bridgehampton survey is open through tomorrow.

"From the students and families who are responding, more of them seem to be indicating they will remain on remote instruction," Mr. Hauser said on Tuesday.

The surveys improve communication in the district over all, he said. "Any way that we can keep the lines open so that there is a free exchange of information is very helpful," he said. The next step is "being careful how we evaluate the data. It's very easy right now to say it looks like half the kids aren't coming back, but that's because of the limited response to the survey."

Trees, Wreaths for Sale in Amagansett
Holiday Cheer Is Coming to Sag Harbor
Even More Thanksgiving Options From the Pike and Old Stove
END_OF_DOCUMENT_TOKEN_TO_BE_REPLACED