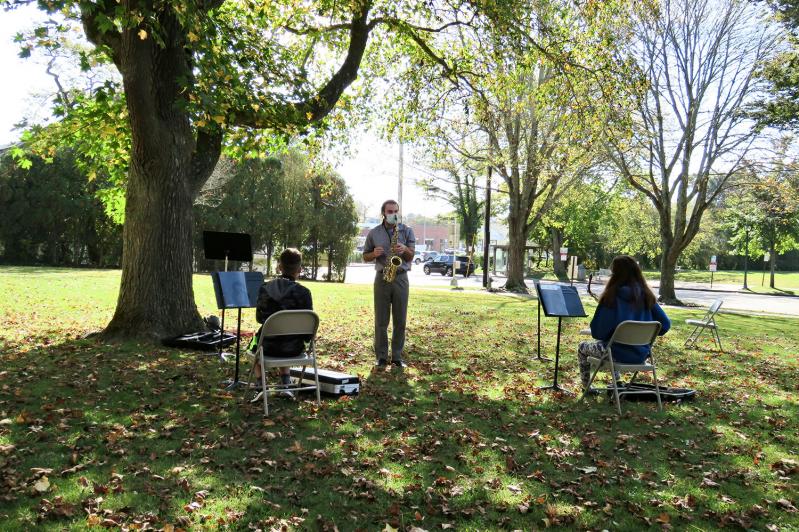 The front lawn of the East Hampton Middle School has been used as a classroom lately for socially distanced music lessons.
Jane Bimson
By Christine Sampson

The East Hampton School District on Tuesday announced it will add in-person school days for students on Wednesdays at the middle and high schools, and said it is exploring a plan to resume full-time in-person classes for all middle schoolers starting in January as long as infection rates here stay low.

Over the summer, school administrators pledged to re-evaluate reopening plans by the 10th week of classes for the middle and high schools -- a process that is under way, they said Tuesday, since that time is fast approaching.

"One of my most important moral principles is . . . making the well-being of our students our fundamental value," Richard Burns, the superintendent, said during an East Hampton School Board meeting. "We've spent scores of hours thinking about these plans."

According to Adam Fine, the assistant superintendent, a key aspect of planning is learning from families on the remote-only plan whether they want to commit to continuing remote lessons or prefer a return to classes, and vice versa for the families who are on the hybrid plan. At both the high school and middle school, students are in school two days a week and taking remote classes the other three days.

"We definitely believe the models are running smoothly from a technical standpoint," Mr. Fine said. "Do I think these are the best things for the kids? Absolutely not. We want all our kids back . . . functioning as a normal school, but we understand that's not possible."

Student cohorts would alternate attendance on Wednesdays beginning Nov. 16, he said. Part of the middle school discussion, he said, is whether to relocate one middle school grade to the high school in January and bring back all of the students in the other two grades. Sixth grade makes sense since it is already divided into pods, Mr. Fine said, but no final decisions have been made.

"Our school district is failing our children. The focus has been on ensuring that the elementary-school-aged children can attend school five days in person, but the middle and high-school-aged children are suffering immeasurable harm from sitting in isolation staring at a computer screen all day," Erin Tintle, Kristin Corwin, and Rachel Cooper wrote in their petition on change.org.

School officials said they are feeling the urgency of bringing students back in person.

"Looking at the progress report grades, I have a lot of concerns in terms of students' performance. There is a difference between those who are physically here and those who are not," James Crenshaw, the high school principal, said during an LTV-televised meeting that had more than 90 viewers.

"One of the biggest things we're going against is that unfortunately, we're comparing this to what we've known for years," Mr. Crenshaw later continued. "We have to work on making this better, which is separate work from trying to get back to what was. . . . We're not settling. We just need to work on that."

Nick Finazzo, an East Hampton Middle School teacher, asked whether the teachers' opinions were taken into consideration when the decision to return students on Wednesdays was made. In response, J.P. Foster, the school board president, suggested Mr. Finazzo take his question to the school principal or teachers' union.

Charlotte Sasso, a parent, called in to the meeting to ask whether the former Child Development Center of the Hamptons charter school, which closed in 2016, could be a suitable space to annex for in-person classes.

"It's in a different school district and doesn't meet New York State educational requirements. It's not owned by us and I don't even know what state it is in at this point," Mr. Foster said. That building, owned by East Hampton Town, is in the Wainscott School District.

Ms. Sasso also asked about the return of high school clubs, but Mr. Crenshaw said he is more focused on addressing students' grades right now and trying to add extra-help sessions where he can. "Clubs we can layer in as time goes by," he said.

In other East Hampton news, the upcoming departure of Beth Doyle from the principal's role at the John M. Marshall Elementary School spurred two administrative changes at Tuesday's board meeting.

Mr. Fine also said the district has ordered nearly 300 more Chromebook computers for students, but said the computers are on back order with their suppliers.

Trees, Wreaths for Sale in Amagansett
Holiday Cheer Is Coming to Sag Harbor
Even More Thanksgiving Options From the Pike and Old Stove
END_OF_DOCUMENT_TOKEN_TO_BE_REPLACED