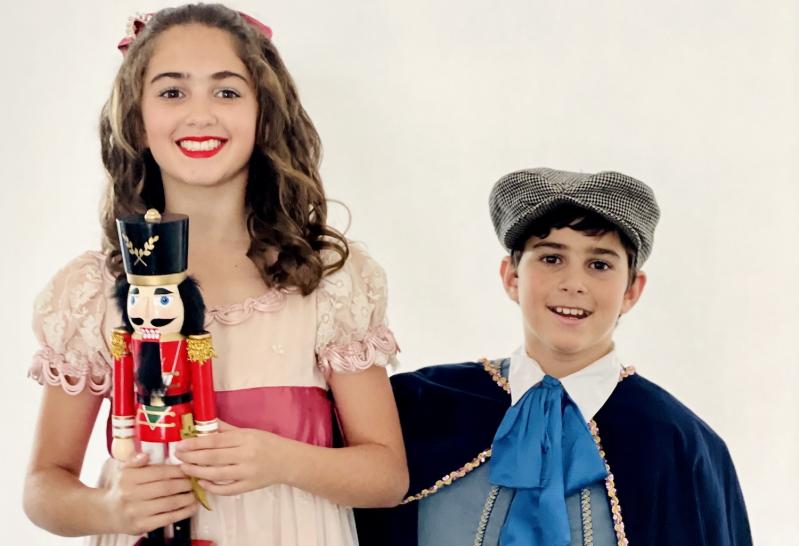 Shoshana Sobey, 12, will dance as Clara and her brother Ami, 10, will dance as Fritz in the Hampton Ballet Theatre School's performance of "The Nutcracker" this weekend.
Jordana Sobey
By Christine Sampson

The Hampton Ballet Theatre School has put on a performance of the classic holiday ballet “The Nutcracker” nearly every year since 2009 — the one exception a byproduct of Covid in 2020 — but this year’s production is the first time in school history that the annual production will feature a pair of real-life siblings in the roles of Clara and her brother Fritz.

Shoshana Sobey and Ami Sobey are siblings from Sag Harbor who dance the roles of Clara and Fritz, respectively, and they are looking forward to dancing together onstage this weekend. As the story goes, on Christmas Eve, Drosselmeyer, Clara’s godfather, presents the children with a wooden nutcracker carved to look like a little man. Clara is immediately enthralled by it, but Fritz promptly breaks it, and Drosselmeyer has to fix it — thus setting the stage for the magic that happens later, after the clock strikes midnight.

But Shoshana, 12, who has danced at Hampton Ballet Theatre School since the age of 3, seemed unfazed. “My brother always keeps it exciting,” she said.

Sara Jo Strickland, who started the ballet school in 2007, said the siblings bring a sweet element to the show. “They’re playing themselves a little bit onstage because the brother teases the sister. It’s so cute that they’re doing it together,” she said.

Ami is one of two male students in the show and has been dancing for six years. Being a boy in ballet has its challenges, of course, but he said that “it helps you with soccer . . . and it can help you get stronger.” It also involves an element of acting, he said.

Shoshana said she has dreamt of being Clara for years and even dressed the part once for Halloween. “It can be stressful at some points,” she said. “We’re putting a lot of energy into it, but it’s fun.”

The family connection for Shoshana and Ami doesn’t stop there. Their father, Dr. Steven Sobey, helped with sets and will perform onstage with them in the party scene, and Jordana Sobey, their mother, who danced in “Nutcracker” productions when she was growing up, helps out backstage.

“What makes it all so great is that they’ve created so many friendships through ballet,” Ms. Sobey said.

Ami and Shoshana, who are among 75 kids in the cast, share their roles with two friends and fellow dancers, Catherine Porter and Savanna Lillie. Shoshana and Ami will appear in the 7 p.m. Saturday and 2 p.m. Sunday performances, while Catherine will play Clara and Savanna will play Fritz on opening night on Friday at 7 and in the Saturday matinee at 1. All performances are at Southampton High School.

Shoshana said that Catherine “is an amazing dancer. I admire her technique and how much effort she puts into everything, and it looks like she really loves it. She’s a really great friend, too.”

Ami had similar praise for his fellow Fritz. “Savanna and I have known each other since we were 3 years old, and she is a really great dancer and a good friend,” he said.

Other key members of the cast are Lua Li and Sadie Radice, who are seniors, sharing the parts of Sugar Plum Fairy and Dewdrop, and Molly Radice, also a senior, as the elegant Snow Queen. A larger-than-usual group of young beginner students will play mice, soldiers, and angels, and a handful of professional dancers will appear in the show for classical pas de deux (partnering work) with the advanced students.

Ms. Strickland, who danced when she was younger in productions of “The Nutcracker” that were held at Southampton High School under the director Aras Ames, explained that much of the casting is done “in the classroom.”

“I look for energy,” she said. “For certain roles they need to have a certain amount of technical skill, but sometimes I may challenge a dancer by giving her something to work towards. . . . I know the kids that are in class constantly and working the hardest can be responsible for a hard role.”

She also said that the elaborate sets fit perfectly into the larger scale of the Southampton High School stage. “We’re able to use the set in its full capacity and a snow set that we hadn’t been able to use,” she said. “Visually, it’s going to be beautiful.”

Tickets range from $20 to $40 in advance, plus an online ticket fee, and $25 to $45 on the day of the show. They can be bought via the Hampton Ballet Theatre School website. Some will be sold at the door, though Ms. Strickland said the Sunday shows tend to sell out ahead of time.