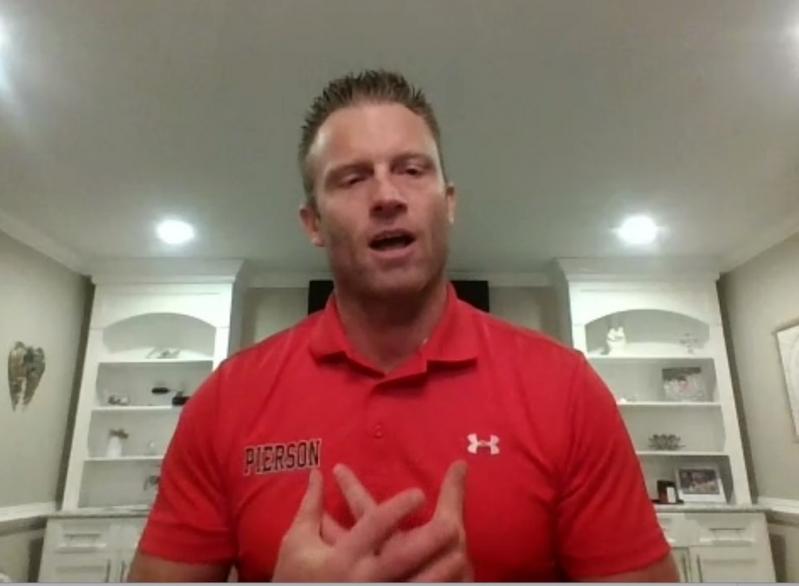 Eric Bramoff, the athletic director of the Sag Harbor School District, commented at a virtual school board meeting on Monday that the decision not to play high-risk winter sports is a difficult one.
By Jack Graves

With East Hampton High School back to in-person learning this week, the winter sports season that was to have begun 17 days ago seemed finally on track, figuratively and, in part, literally. But the big news was Suffolk County Executive Steve Bellone's announcement Monday, following the state's lead, that "high-risk" sports, namely boys and girls basketball, wrestling, and competitive cheerleading, could begin a foreshortened season on Monday, should the various school districts agree.

In East Hampton, the answer, according to the East Hampton School District's athletic director, Joe Vas, was "yes." Richard Burns, the district's superintendent, thinks the high-risk sports can be done safely, but the school district would need the county to provide the weekly testing mandated by the Suffolk County Health Department, "more than 120 tests per week in our case." The testing, then, was "still a wild card," he said.

In Sag Harbor, the answer was "no," for Pierson's students, according to Jeff Nichols, that district's superintendent. Bridgehampton was undecided as of Tuesday, according to its principal and athletic director, Mike Miller.

Nichols, when questioned Tuesday morning, said that the Sag Harbor School Board at its meeting Monday night had left the decision up to him. Noting that the seven-day average of positive Covid-19 tests had been at 5.2 percent when Section XI, the governing body for Suffolk's high school sports, had postponed the start of high-risk sports in early December, Nichols found it "illogical" that they were being given the go-ahead now when the rate was so much higher.

Long Island's infection rate remains the highest in the state, with Suffolk reporting 1,135 new positive tests on Monday for a daily positive rate of 8.54 percent and Nassau reporting 942 and a rate of 7 percent. Nevertheless, those numbers represent a decrease from earlier this month, when Suffolk County reported over 2,000 new cases on four days and a positive test rate as high as 11 percent.

In addition to the higher infection rate, it is also "counter-intuitive" to think that high-risk winter sports could flourish "when the high school kids are here two-and-a-half days a week," Nichols said.

For his part, Vas welcomed the news, at least insofar as varsity and junior varsity teams were concerned -- though as of Tuesday morning he remained undecided about the middle school's teams. He maintained that high-risk sports could be conducted safely. "The kids are safest when they're in school," said Vas, maintaining that those who had been infected had so far appeared to have contracted the disease outside of school.

Guidelines set up by the Suffolk County Health Department will mandate that student athletes be tested for Covid-19 once a week. The rapid tests, which the county is supposed to provide to school districts, will be offered free of charge. Players and coaches will have their temperatures checked before practices and games and will be required to wear face masks whenever possible during practices and play. There is to be minimal sharing of equipment, and coaches will have to maintain attendance logs that can be used should contact tracing be required in the event a player or coach is diagnosed with Covid-19.

No spectators will be admitted when games or matches are being contested at the high school, Vas said.

No East Hampton basketball and wrestling schedules were posted on Section XI's website as of Tuesday morning. Scheduling was to be discussed with the chairs of Section XI's sports programs later that day, Vas said, and presumably would be posted soon given the Monday start date. The coaches of high-risk sports here -- Jim Stewart (wrestling), Dan White (boys basketball), and Krista Brooks (girls basketball) "have been alerted," he added. He was not sure yet about cheerleading, he said.

The high-risk sports seasons will be short, from Monday through Feb. 27. Fall sports are to be played March 1 through April 25 and spring sports from April 26 through June 19.

As to the winter teams that have resumed practicing and playing, Mike Vitulli's bowlers were to have contended in their first match at the All Star lanes in Riverhead Monday, and at Longwood Tuesday. The boys swimming team, coached by Craig Brierley and his son, Thomas, was to have made its debut at Hauppauge yesterday, is to be home to Northport at the Y.M.C.A. East Hampton RECenter today, and is to be home to West Islip tomorrow. The track teams' season-openers with Westhampton are set for Saturday, with the boys at home and the girls away.

"It's either feast or famine," Craig Brierley said on the phone on Sunday. "The kids have had some good practices -- they're ready." As for the league and county meets later next month, he said, "So far, the league meet [on Feb. 11] is going to happen, at Hauppauge, with three teams going in the morning and three in the afternoon. The county meet [on Feb. 20] is still on, with the same format, though it won't be at Suffolk Community Brentwood. We're still working out the logistics."

"It's difficult coming back after two weeks of virtual workouts," Yani Cuesta, the girls track coach, said, "and it's supposed to be a cold week . . . but we'll see."

Westhampton's numbers, as was the case with the league's other teams, were greater than hers -- there were 13 on East Hampton's roster as of this week and she still didn't know who would be doing the field events.

"We'll see what we have and move on from there," Cuesta said in parting.

Spring Has Sprung at the L.V.I.S. Shops
An Online Auction for ARF
A Rescheduled Telephone Town Hall With Lee Zeldin
END_OF_DOCUMENT_TOKEN_TO_BE_REPLACED