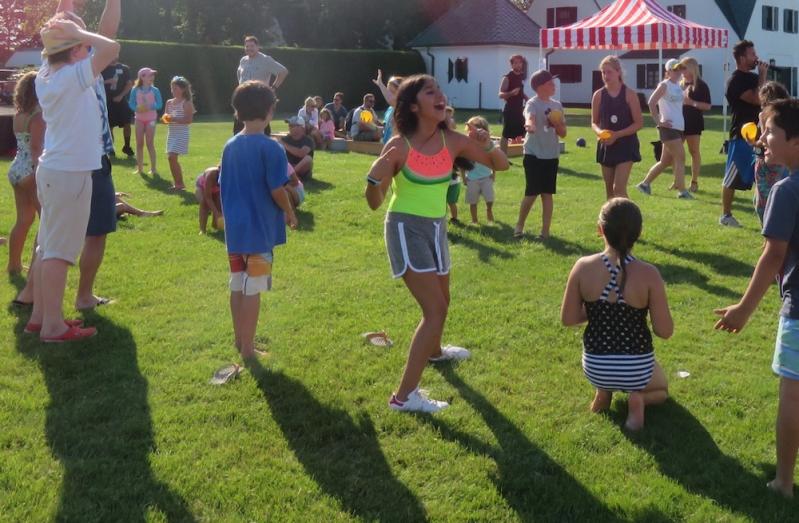 Summer camp will look and feel quite a bit different from the camp kids remember in other years.
Camp SoulGrow
By Bella Lewis

Summer camp is something kids, and counselors, look forward to all year. This year, however, even as school ends, it's uncertain whether many camps here will open at all and what they will look like even if they do. On June 9, Gov. Andrew M. Cuomo released guidelines under which day camps can operate while still adhering to Covid-19 safety protocols, and since then camp directors have been grappling with how to forge ahead safely.

Guidelines limit off-camp trips, the number of campers in a group, and contact between campers of different groups -- some of the very things that define the day camp experience.

"Our iGROW summer program that we've had since 2011 is all about off-site learning and organic gardening, wonderful trips to other areas, collaborations with Guild Hall and Amber Waves Farm. But we're going to have a great time at home," said Martha Stotzky, the education director at Project Most. "Who could argue with the guidelines?"

"Cohorts" is the term being used at places like Project Most, where each group will have no more than 10 kids who interact with only one another, plus two group leaders. "We kept the same number of staff that we had for larger groups in previous summers. They'll have a full week's training and because groups will be so small, with two counselors, the guidelines can be better adhered to. It's not going to be the easiest thing in the world, but parents will contribute."

Doug Weitz, director of the Hayground Camp in Bridgehampton, explained that last week, when the guidelines came out, he had only just emailed families telling them that the only circumstance under which the camp would not open was if the regulations prevented the camp from providing "an authentic Hayground Camp experience."

"Little did I realize [the guidelines] would come out and do just that," said Mr. Weitz, who was crestfallen and initially decided to close the camp for the summer in response to the guidelines.

"The one thing that kneecapped us was the size of the groups. Hayground is about kids making their own choices, trying to empower kids to feel like they have a say, not just about Hayground Camp, but for them to have a say in their own experience of life." Mr. Weitz was reluctant to split all the camp groups in half to cohorts of 10 because it limited the children's ability to choose activities and playmates since there would be a set schedule and group.

An email from Mr. Weitz and the Hayground team went out on Tuesday saying, "After a day of mourning the loss of Hayground Camp 2020, we couldn't fathom a summer without your kids and went back to work. The fruit of our brainstorming labor is a reimagined Hayground Camp experience designed to keep us playing safely this summer. It's called Hayground Deconstructed."

Pre-chosen activities in two-hour sessions in various time slots throughout the week will be Hayground's new approach to summer 2020. "It was interesting when we started examining camp, some things we do are still totally appropriate. Capture the flag, yes. On the other hand, actually comically dangerous in retrospect, if you came in the middle of the summer last summer, 150 kids would be lying all over each other packed into our gathering space laughing at a puppet show. Not a great Covid-19 moment," he laughed.

Sportime in Amagansett also re-evaluated the important facets of camp. Its safety guidelines stipulate that high contact activities like the use of water slides and inflatable equipment will not be happening this summer. The guidelines further explain, "We are creating new outdoor activities for campers to enjoy, including nature walks, yoga, and scavenger hunts, and gardening, with more to come!" With regard to swimming, campers who are old enough will receive instruction from the pool deck to avoid close contact.

Younger campers who would normally require face-to-face, in-pool contact will have counselors in the pool to closely supervise the session while remaining distanced, which means littler swimmers will have a noodle or flotation device at all times.

"The whole thing is much more boutique and ê la carte, for you to only pick what you really want to do, and when there are limited spots," said Mr. Weitz on the subject of different pricing for the smaller cohort sessions this summer. It was important to him and the camp to strike the right balance between accessibility and money to sustain the symbiotic relationship between Hayground Camp and Hayground School, as well as to give meaningful work to young counselors.

Woodshop, biking, swimming, art and fiber, sports, cooking and gardening, sports, musical theater, and hip-hop and fashion are the offerings for this summer at Hayground. Pre-formed cohorts between families who are sticking together this summer can book an entire afternoon session for themselves.

Project MOST's iGROW program is already full, but parents can book custom-tailored STEAM activities that begin July 1. The program is for children in first through fifth grades and costs $40 an hour for one child and $10 an hour for each additional child, with a maximum of four students total.

Overnight camps have not been able to reimagine their summers since the risk of exposure is just too high. In accordance with the governor's orders, none will be open in New York. Camp Quinipet on Shelter Island shared a video with its campers expressing the staff's sadness not to see them this summer.

To raise spirits, counselors in the video acted out a parody of summer camp in Covid-19. One staff member yells to a group of imagined campers in his chirpiest camp counselor voice. He brandishes a clipboard. "All right guys, so today we're going to go over a list of adventure activities, so listen up very closely! We have GaGa Ball . . . with no balls. Ninja . . . but it's touch free. We have riddles. Just riddles. We have isolated friendship bracelet making! We also have painting at the gazebo . . . but only one person in the gazebo at a time!"