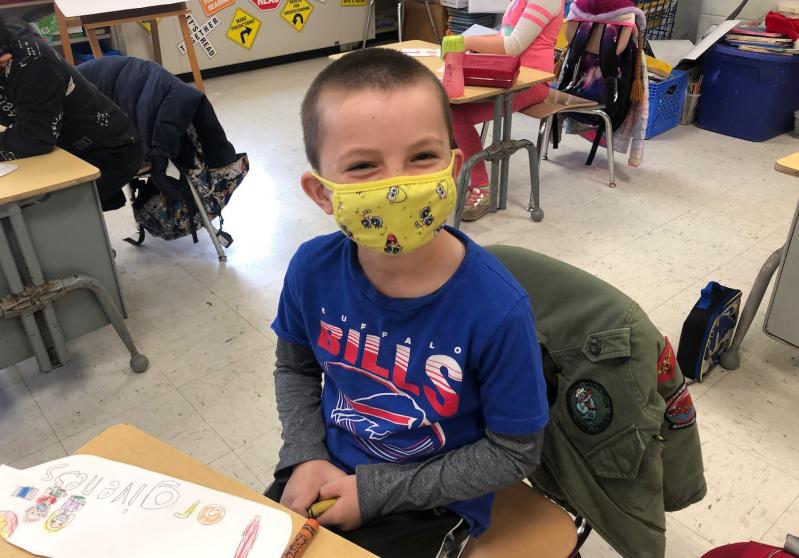 Following new recommendations issued by the Centers for Disease Control late last week that said students no longer have to wear masks while in school, local school districts looked to the state to provide clarification and they got it on Monday when Gov. Andrew M. Cuomo announced that New York would modify its mask guidance to allow schools to opt out of requiring masks outside.

"We'll leave it up to that local school district," the governor said in a briefing on Monday. Masks must still be required indoors.

In general, virtually all Covid-19 restrictions can be lifted once 70 percent of adult New Yorkers have received at least one dose of the vaccine, Governor Cuomo said Monday. As of Sunday, 68.6 percent of New Yorkers 18 and older had received at least one dose, but the pace of vaccinations has slowed dramatically. Asked to guess how long it could take to reach teh 70-percent mark, state officials said it may take anywhere from a week to three weeks.

Over the weekend, several local schools emailed families or posted statements on their websites to address the confusion about masking in schools. In a statement posted Sunday on the Springs website, Debra Winter, the superintendent, said masks are still required but that she plans to "keep our community updated on more definitive information as soon as it becomes available." She said that any changes to the mask rule will require action by the school board, which is to meet on Monday night.

"For now, the use of a mask remains the policy at Springs School," the statement said. "The use of masks is a component of the Springs School reopening plan that was approved by the Health Department in August 2020, under which we are still operating."

Adam Fine, the assistant superintendent of the East Hampton School District, said by email Monday morning before the governor's announcement that there will be "no changes until we receive guidance from the state education department."

Robert Hauser and Jeff Nichols, the Bridgehampton and Sag Harbor district superintendents, respectively, also said by email early Monday that no changes were being made to mask rules in their districts.

With only two weeks or so left in the school year, districts may be reluctant to fully rework their policies; and the C.D.C. has recommended against lifting the mask mandate for children indoors, according to the governor.

During the two-week period leading up to June 5, the most recent day for which data are available, only one case of Covid-19 was reported in the East Hampton School District — occurring at the John M. Marshall Elementary School, where children are generally too young to receive vaccine shots. East Hampton has had 200 total cases among students and staff since September. In the two weeks before June 5, no cases had been reported at the Springs School, Amagansett School, Montauk School, or Bridgehampton School. The same goes for the Sag Harbor School District and the Wainscott and Sagaponack Schools.

The governor urged schools to work with school nurses and their municipalities to get children 12 to 17 vaccinated, with parental permission, before the start of summer vacation. "They're in school, they're there now, you have them in one place," he said.

On Monday Suffolk County Executive Steve Bellone announced an initiative called #CampVax that will incentivize parents to have their children ages 12 to 17 vaccinated ahead of the start of summer so that kids and teen counselors will have safer camp environments. The county will be offering free ice cream cones and tickets to Splish Splash Water Park, Adventureland Amusement Park, and the Long Island Aquarium for children in that age group who receive the Pfizer vaccine.