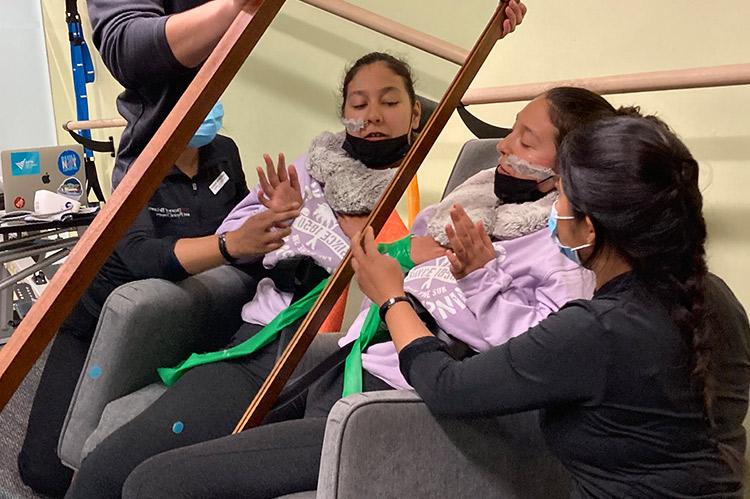 Many kids and parents in Sag Harbor and Springs have fond recollections of Bella Adlah, who lived and attended school here up until a few years ago. Their memories of her are so fond that they have taken shape as a swell of support for the Adlah family following Bella’s diagnosis in June with functional neurological disorder, which causes daily seizures, loss of vision and ability to eat, and left her unable to talk above a whisper or use her limbs and torso from her shoulders down.

“Her nerves and brain are not connecting,” her mother, Linda Adlah, said in an email to The Star this week.

A GoFundMe campaign has raised nearly $41,000 to help Bella, 16, continue what is known as reactive physical therapy at Re-Active Wellness, a facility in California. It has cost around $2,000 per week and is not covered by insurance, Ms. Adlah said. But it’s helping. Just this past Friday, her daughter began to see again, after recently regaining use of her arms and hands.

In great spirits, Bella likes to paint and can do schoolwork in between various types of therapy. Her younger sister, Gabby, 15, is a dedicated helper. And their mother is extremely proud of them — but worries that when money runs out, they’ll have to leave California for Massachusetts, where they first moved after leaving the East End, and switch to a less intensive therapeutic regimen.

“She is getting stronger every day. We want to continue to extend her program because she is making such great progress,” said Ms. Adlah, a single mom who is “just trying very hard to give [Bella] everything she needs.”

“We would like to stay for three more weeks. . . . Everything seems to be going in the right direction and we would like it to continue that way. When we return to Boston, her services will dramatically decrease to a few hours a week. She needs the intensity right now to get stronger.”

On Thanksgiving, families in the Redwood neighborhood of Sag Harbor organized a Turkey Trot to generate donations. “Keep up the amazing work, Bella! You have an entire community cheering/running for you!” wrote one Sag Harbor supporter on Facebook.

Before she was diagnosed, Bella started an organization called Have Fun & Stay Strong in which she held toy drives and made care packages for hospitalized children. She hopes to become a pediatric oncology nurse or child life specialist when she gets older, her mother said.

Ms. Adlah said she and her family are “happy and humbled by all of the support we have received. . . . We have many friends on the East End sending us well wishes, and it means the world to us.”

The family’s fund-raiser can be found online at gofund.me/d94c01f9.