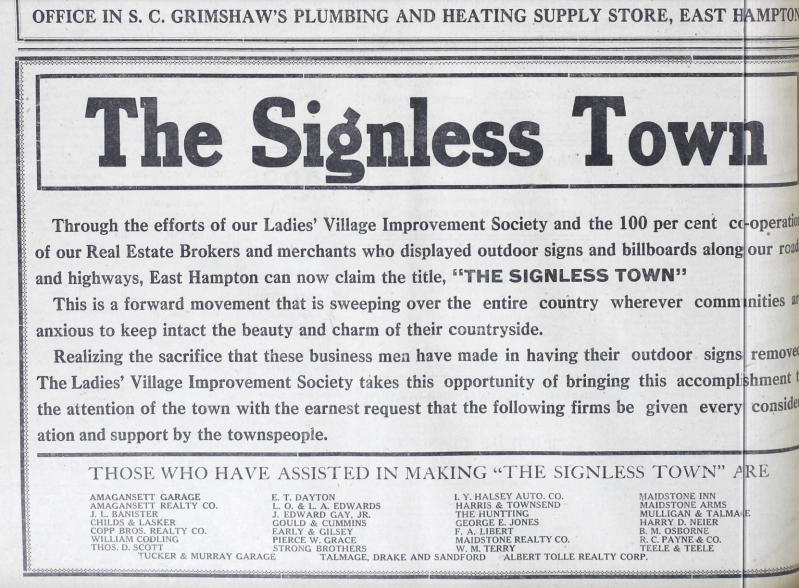 Last week, I mentioned my late Aunt Mary, who used to run a boutique called Promised Land on Newtown Lane, where she sold the jewel-tone glad rags — block-print T-shirts, gypsy skirts, batik muumuus, brass chandelier earrings — that signified, for several long decades in the 20th century, the wearer’s membership in the tribe we used to call Bohemia. (She began selling this then-nonconformist regalia on St. Mark’s Place in the late 1950s, and persisted with her retail formula for so long that her styles overlapped with a revival of the look in the mid-1990s, when Calypso St. Barth opened up on the opposite side of the street selling much the same block prints and blowsy tango skirts at three times the price.)

One thing that annoyed Aunt Mary very much, in her position as an East Hampton shopkeep, were unscheduled visits in the 1980s and 1990s from busybodies with clipboards who came into Promised Land once in a blue moon to demand that she remove the hanging baskets of scarlet geraniums that adorned either end of the storefront’s Mediterranean-blue-and-cream-striped canvas awning.

Hanging pots of flowers was illegal, according to a strict interpretation of the laws governing signage. No hanging flower pots! Flower pots were akin to advertising; flower pots, when affixed to a business, were the cousins of signs. And East Hampton hated signs.

We’re going to get petty this week, reader. Let’s get trifling. Let’s talk about signage.

People who remember the old days — who remember when, in East Hampton, there was a generally agreed-upon, group-handshake intention not to let our landscape become as suburban and sprawly as everywhere else in America — know what I’m talking about. We remember the hot scandal over Jerry Della Femina’s pile of Halloween-time pumpkins at the Red Horse Market in 1993, which were also outlawed as “signage.” We remember the other teapot-tempest at Red Horse, over the red horse sculpture itself (a rearing, rampant stallion whose reproductive organs were repeatedly spray-painted in contrasting colors by juvenile delinquents). Our communal desire to maintain open vistas — and the illusion that we were still a rural place — was so strong that you couldn’t even adorn your business with garden produce.

Times have changed. You can’t walk the dog without tripping over a sign this summer. Just this morning, when I went to go pay my village tax bill — forgetting my checkbook, like a dolt — I noticed one of those temporary lawn signs planted in the grass directly in front of Village Hall advertising “Cowboy Yoga,” whatever that is, and more of the same wedged next to the walkway beside Cittanuova. Today, it’s Cowboy Yoga; yesterday, it was art fairs and mobile-beauty-service vans. Our chain stores have begun habitually putting out sandwich boards on the sidewalk, too, advertising their coffee-table books and 30-percent-off sales.

My older brother, who edits The Star, told me two years ago that I could take over this space for a weekly “Shipwreck Rose” column with one strong stipulation: No politics. He was — quite reasonably — worried I would rant and rave in print about Lee Zeldin and attempt to organize mobs to wave placards in protest of the Army Corps of Engineers’ earth-moving work at Montauk, and interfere with the editorial protocols of this newspaper. And so before starting this week’s column, I had to host a silent debate with myself about whether or not signage was politics.

I’ve decided no, strong feelings about signs are not politics. Signage, and debates about signs, are an aesthetic matter, not a political matter.

Our discourse around here tends to get overheated (although perhaps less passionate in recent years, as the population booms and the majority of residents don’t give a toot anymore about anything beyond the confines of their evergreen hedges), and I just think it might be healthy for us to uncouple our opinions about signs and the regulation of signs from partisanship and political allegiance.

It’s about taste! Let’s debate good taste, shall we?

The Ladies Village Improvement Society used to be the ultimate arbiter of East Hampton good taste — not, I should say, in matters of dress or interior décor, but when it came to our public spaces. The L.V.I.S. has never “done” politics, but policing public aesthetics? Public aesthetics have always been that worthy club’s purpose and mission. It was the L.V.I.S. that prevented Town Pond from being drained and filled more than 100 years ago, on aesthetic grounds; the L.V.I.S. that agitated to get ugly electric lines buried along Main Street; the L.V.I.S. that planted trees and shrubs to beautify the Long Island Rail Road trestles, and the L.V.I.S. that took the lead in identifying historic buildings and homes in the village, leading to the creation of the village historic districts. The L.V.I.S. was our bulwark against visual clutter.

In 1926, East Hampton was nicknamed “the Signless Town,” after the L.V.I.S. convinced the real estate agents and merchants of the town, unanimously, to organize behind a ban on billboards and neon.

You can laugh about “village beautification,” but ugliness is not good for business. The beauty of the village is its worth. The beauty of the place is why people and businesses want to be here. I kind of wish the L.V.I.S. would wade back into the fray.

And now I come around, sideways, to my point, which is that I don’t think we need 50-plus large plastic banners affixed to lampposts up and down Main Street and Newtown Lane, from Guild Hall to the Methodist Church, week in and week out. This isn’t politics, it’s aesthetics. The conscious suppression of visual jumble is why East Hampton used to be able to boast we were “the most beautiful village in America” (and printed that boast on every souvenir place mat and tourist map sold for 60 years). I mean, if the lamppost signs went up only for some special jubilee — the next centennial of a local museum or the Fourth of July or the Christmas parade — most of us wouldn’t shrink in horror at the sight, right? But 50-plus banners, without ever a break, is excessive and eyesore-y, however cute the individual banners may be.

And maybe we could color-coordinate? The lampposts and trash cans in East Hampton were traditionally color-coordinated, painted darkest green because darkest green blends in with the leaves on the trees and the green, green grass of home. But — at the risk of sounding like Mr. Blackwell, the self-appointed 1960s fashion critic who published annual lists of the Worst Dressed Women — these current lamppost signs clash. They clash with the landscape around them, which is gray, blue, green, and sand-colored. Maybe the lamppost banners could focus on forest green and cream, or Williamsburg-blue and putty? Colonial colors that go with the shingles and the elms?

I’m being a jackass of obnoxiousness here, I realize, and I don’t mean to slag off whoever is designing the banners, which are well done and et cetera. But I did used to be an editor at Vogue, and I could only keep silent about the rainbow pastels and the pumpkin-orange for so long before the mismatch started impacting my blood pressure.

Also, given the crisis state of the Earth, environmentally, and the urgent need to stop being so wasteful with plastics and other non-biodegradable materials, might it not make sense and be more fiscally friendly to create lamppost banners that are reusable and don’t have to be dumped in the trash when the moment’s passed? (To get really petty, I mean, might I suggest that instead of one-off banners that read something like “First Annual Harvest Festival, Herrick Park, October 1,” and leaving those banners up for two months, try something like “Harvest Festival, Herrick Park, Saturday,” leave them up for one week, and use them again next year?)