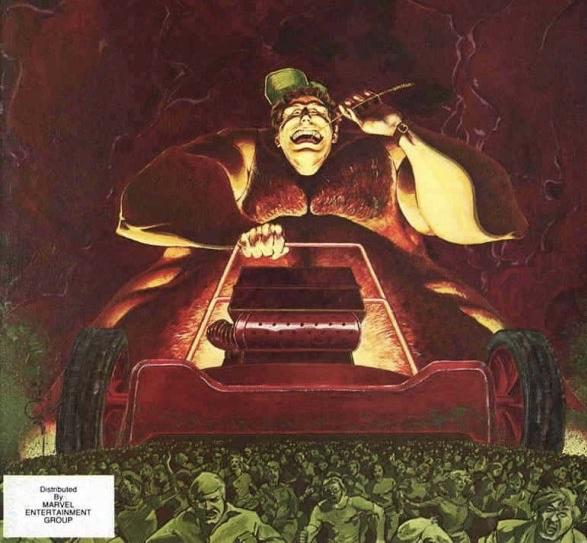 From an adaptation of the Stephen King story "The Lawnmower Man" in Bizarre Adventures #29, December 1981. Art by Walter Simonson.
Marvel Comics
By Baylis Greene

What’s all this fuss about lawn care? Pesticides, fertilizer, chemicals, organics, all that rot. I don’t even water mine and it’s like a damned ’70s shag carpet. Thick. Luxurious. Uniformly green.

What’s more, it’s sufficiently wildflowered to break up all that chlorophyll-fueled monotony and service the buzzing swarms. True, it’s been a spring “for the ages,” to import a cliché from sports and apply it where it doesn’t apply. Verdant, in other words.

Or maybe some kind of sports allusion does hold, given my propensity for treating mowing the roughly quarter-acre patch as a day’s workout that obviates any need to strap on the old New Balance 10-and-a-halfs and hit the road for a run.

“Weekend warrior,” they used to say. It still fits, at least when it comes to the way I cover my limbs for lawn battle, don silly headgear in futile defense against the sun, jab little foam plugs into at least two of my skull’s orifices, and affix cheap plastic wraparound goggles over my baby blues as the cut-grass particles, dirt, and debris fly.

I don’t know from allergies, but each week so far this season I’ve announced my completed mowing duties with long, trumpeted nose blows. That and sweat-soaked clothing, gasped inhalations, and chugged water. From global warming and wildfires on down to the pollen count, and I would add the sheer speed of grass replenishment after the mower’s done its damage, all the wrong records are being set.

It’s a jungle out there in our Noyac backyard, alive as it is with snakes, spiders, yellow jackets, dragonflies, bats, rodents in the trees and at the bird feeders and tunneling underground. The occasional fence-jumping deer. I’m almost reluctant to roll my puttering 21-inch Yard Machines machine into the middle of it. But appearances must be kept up.

I would just ask my neighbors, those who bring in an army riding mowers, leaf blowers, weed whackers, tickicide sprayers, and sprinkler system maintainers every Thursday, to maybe take a walk on the wilder side for a change. Because you really can’t tell the difference. Only my ears can.