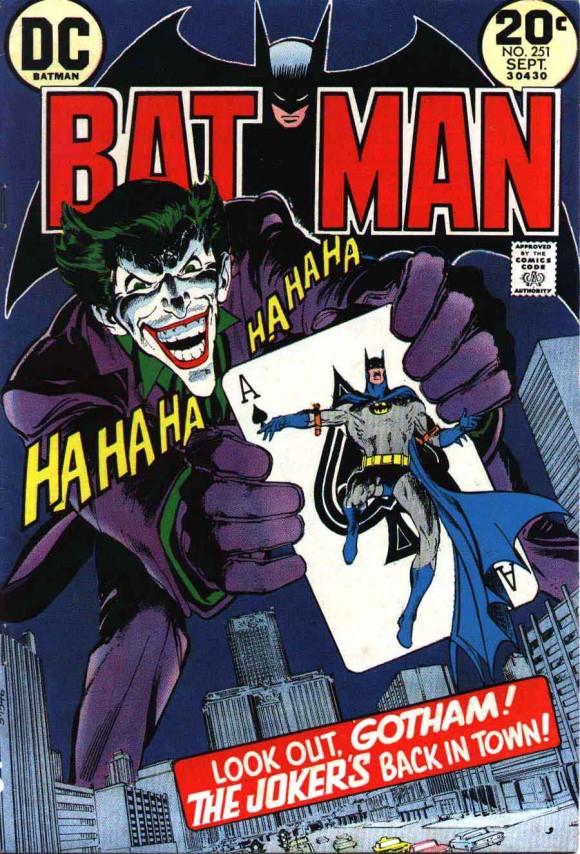 Batman No. 251, from September 1973, art by Neal Adams, words by Denny O’Neil, considered among the best of the single-issue Dark Knight stories, and certainly the favorite of your friendly neighborhood columnist.
DC Comics
By Baylis Greene

If there was ever a gathering ripe to be banished by Covid, it was New York’s Comic Con. Take the proverbial packed Tokyo subway car and multiply by a thousand over the vast convention-space acreage of the Javits Center, and you get the idea. You could barely walk for the cheek-by-jowl fans and curiosity-seekers.

I say that with nothing but great sadness, because it had become a favorite tradition for my son and me, beginning in October of his fifth-grade year, when we stalked Artist Alley collecting sketches and autographs and spent an uninterrupted 15 minutes talking to Fabian Nicieza, the writer who co-created Deadpool. (And yes, artistically and monetarily, you better believe he was excited by the then-impending release of the big-budget movie starring his character. Couldn’t have happened to a nicer guy.)

My oldest daughter, a Marvel movie fan, started joining us, and we’d bomb through the early-morning Long Island drear, catch a train at Sayville, and onward into the throngs. Planning was kept to a minimum, better to leave to chance such meetings as the one with Jacob Batalon — Ned Leeds in the Tom Holland Spider-Man movies — as he exited some backstage door. He was as friendly and accommodating as his character. (Pre-weight loss, too, which is always a mistake for a character actor. The witchy nose, the wrecked teeth a la Steve Buscemi — for the love of Mike, leave it alone.)

For me, though, Comic Con was always a trip into the past, from the endless boxes of back issues to flip through to the displays of superhero T-shirts that reached to the rafters.

And in 2019, the last year we attended before the curtain of pestilence came down five months later, that meant encountering a booth set up by a legend among comic-book artists, Neal Adams, the man who in the early 1970s made Batman gritty, dark, and cool again, who reintroduced a maniacal, homicidal Joker, rescuing him from the Cesar Romero silliness of the 1960s TV show, who plotted and illustrated four issues of the greatest of the Avengers story arcs, the intergalactic Kree-Skrull War, who brought a cautionary tale of heroin addiction to a 1971 Green Lantern and Green Arrow story line, and who championed the cause of artists’ rights, creative control, and fair pay, notably in the case of Jerry Siegel and Joe Shuster, the ripped-off creators of Superman, who with Neal Adams’s help were able to kick back on the beaches of Fort Lauderdale and peel off hundred-dollar bills to their hearts’ content.

The trumpeter and cartoonist Dave Chisholm, in one of the better graphic novels of recent years, “Chasin’ the Bird,” got across Charlie Parker’s influence with an analogy, by talking about Neal Adams: “Figures had more weight, lighting was more fully considered, and emotions were more explicit. After Adams, everyone drew like him, or at least tried to.”

Neal Adams died last week at the age of 80. We were rushed that day, maybe I was distracted, who knows, but how I wish I had stopped by that Comic Con booth.