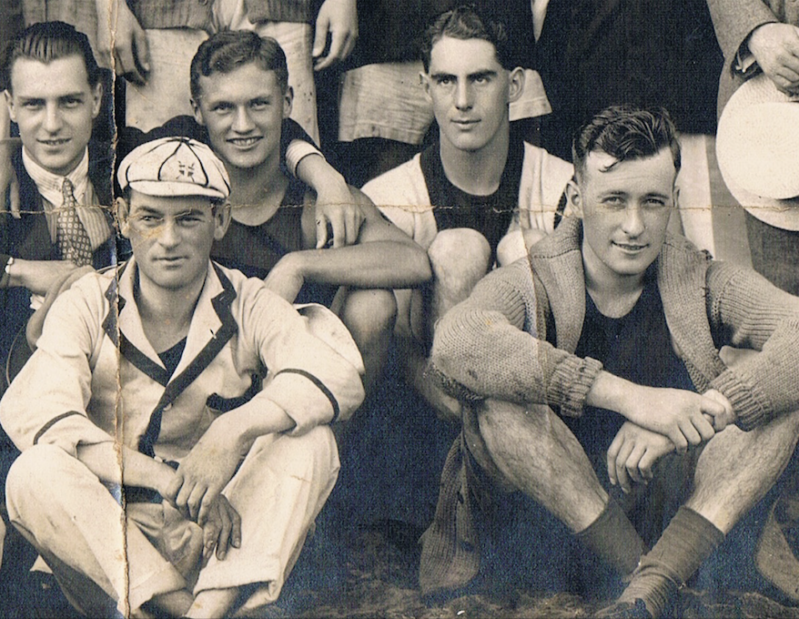 “Chimmy de Rat”: The author's great uncle Jim Rattray (in cardigan) with fellow athletes of the Olympic Club, 1917. The word "jazz" was first recorded in reference to sports in the Bay Area, a few years before. Private collection
By Bess Rattray

Have you heard this thing about the most beautiful phrase in the English language being “cellar door”? Linguists and writers of a certain pompousness (ahem, me) like to debate the relative euphoniousness of words at dinner parties, and credit for the original “cellar door” assertion — a bit pretentiously perverse, if you ask me — has variously been given to Dorothy Parker, J.R.R. Tolkien, or a Shakespearean scholar named Cyrus Lauron Hooper. Alongside “cellar door” on authorities’ lists of beautiful words, according to an “On Language” column in The New York Times dated February 2010, we find “defenestration” and “lollygag.”

Do these experts have ears? No word with the word “gag” within it is among the loveliest in the English language. “Gag,” even when separated from its meaning, is not an attractive word. It sounds like a karate chop to the esophagus.

Sometimes you hear “twilight” mentioned as the most beautiful word in English. That I can see. Words that start with swift, tongue-tapping syllables and end with extended, long tones — cellar do-o-or, solitu-u-de — have music in them that most of us can hear. I’ve always been attached to the word “jubilee,” perhaps for the same reason. I hate the word “serendipity” — I hope I don’t have to explain how sickly it is, in its popular use — but the patter of the rhythm of that one is admittedly beguiling. It’s the flip-flop, musically, of “cellar door,” starting with the long tone and ending with the tippity-tap. Say it aloud: serendipity.

Do you remember the magical toy store Lillywhite’s on Job’s Lane in Southampton? The name of that store shone in my imagination when I was a kid as a beacon, the most beautiful word of all in the entire English language. Try “Lillywhite” out on your tongue. The tippy-tap, ending with an audible “tuh,” is like a gin fizz: Lillywhite.

I throw down the gauntlet with Lillywhite.

(Though, in usage, of course, I do see the problem. Please don’t send a Letter to the Editor about Lillywhite.)

Some of these columnists and novelists who pontificate about language confuse the meaning with the sound. Example: ardor. I’ve seen “ardor” cited repeatedly as among English’s prettiest, and I protest. Sure, sure — romance and passion, lovely. But the actual sound of the word? It stands much too sweatily close to “odor.” You say ardor and I think armpits.

Some of my favorite words in English are not in English, and I hardly know what they mean. I just like the sound. Fantan. A card game, apparently. Fantin-Letour. A French lithographer? I have hardly any idea. I especially love the sound of the words “Umm Kulthum.” Umm Kulthum was a singer from Cairo, legendary in the Middle East in the last century, an Egyptian Edith Piaf. I say her name from time to time as I go about my day, like an affirmation or an amen . . . although I know zero about her. (“Zero” is euphonious.) I had to look up Umm Kulthum” on Youtube a few weeks ago to hear her sing. Can “Umm Kulthum” be my most favorite phrase in English? Guess not.

In comparison with, say, a century ago, is language today being impoverished by the homogenizing monoculture of global commerce in this Digital Age?

I would say heck, yes, though I’m sure the linguists would disagree. We have all sorts of useful new words coming into the English language every month, they’d say.

True. Words like N.F.T. (“non-fungible token”) and “unfriend” and “derp!” Words like “GOAT,” for “greatest of all time,” which — as the most persistently annoying word fad of 2021 — overtakes that most irritating repurposed word of 2020, “unicorn” (for something exceedingly rare and desirable, like a handsome man who is “good at apologies,” kisses you when you have dragon breath, and brings you waffles in bed).

A hundred years ago, the English language was full of early-century zip and razzmatazz. When my grandfather Arnold Rattray and his brothers were teenagers playing baseball and soccer in the Bay Area, no one had yet heard of the new music, jazz, that was momentarily to be born, but as far back as 1912, the athletes in the environs of Oakland and Alameda used the word “jazz,” or “jass,” to mean pep or spunk. That’s not my opinion; that’s what etymologists say, that the very first-ever recorded use of the word “jazz” was in a sports-pages recap of a pitcher’s energetic throwing style during a Pacific Coast League baseball game in the spring of 1912.

That generation also had “dazzle: In the summer of 1917, warships in Britain and North America were painted a wild, all-over, multicolored camouflage called that, called “dazzle" or “razzle-dazzle.” The dazzle wasn't meant to hide the cruisers and destroyers but to make it harder for enemies to train sites on them. Winston Churchill likened dazzle camouflage to the patterned hides of zebras in the wild. Pablo Picasso said it was Cubist. The Aquitania, the converted Cunard passenger steamer that would carry my grandfather Arnold to France, was done up in sawtooth swoops and bands of aquamarine, sky-blue, and black — not just Modern, but downright punk rock.

Jazz and dazzle. I’d certainly take those as trend words over this month’s global slang sensation, a word singing out this very second, as I type these words, in countless school hallways from Tokyo to Mexico City: That is, to be specific, the exclamation “sheesh!” delivered as a high, birdlike call, like the cries of a flock of indignant seagulls. “Sheesh! Sheesh!” in the halls of John Marshall. “Sheesh! Sheesh!” in the halls of Montezuma. It comes to us, I gather, via TikTok.

This week’s other big news in words arrives, again, via The New York Times, which wants us to take a special look at the verb “to languish.” The Times says that this is what we’re all feeling as the pandemic persists: a languishing. Damn skippy, New York Times! I’m definitely languishing. Torpor has set in. Umm Kulthum.