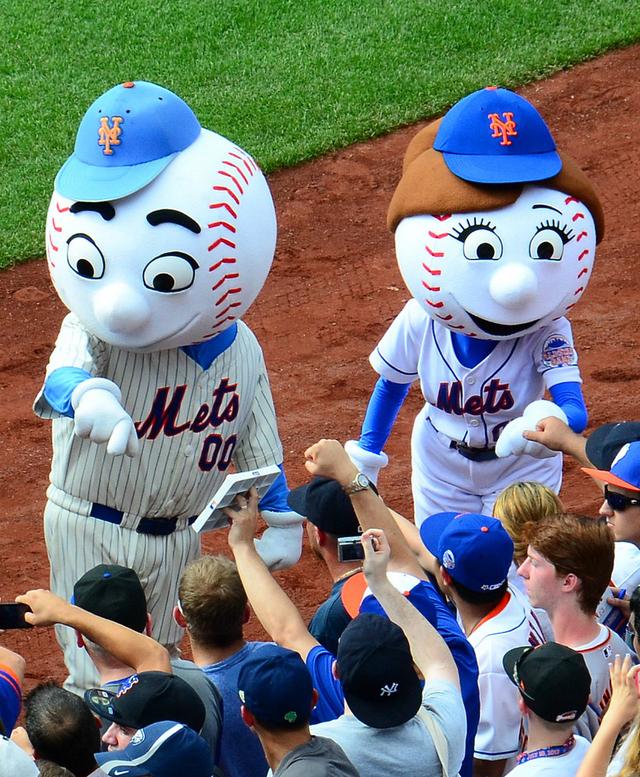 Mr. Met and Mrs. Met in 2013, when fans could fill the stands freely and Covid-unafraid.
Creative Commons
By Baylis Greene

Running through the Sag Harbor streets, I had on my orange Mets visor, a giveaway souvenir from the first time I took my boy to a game at Citi Field, worn for skull ventilation on a hot day, a blue T-shirt from a Free T-Shirt Night commemorating the team’s 2015 National League championship, the cotton surprisingly not cheap or itchy, and Mets-logoed blue tube socks, also a gametime freebie, and so fortified with polyester they’ll never get holey.

Even two of those items would be too much, but what the heck, I thought I could get away with it.

“Let’s go, Yankees!” came the cry from a gang of city kids headed down Bay Street.

If a sub-theme of the pandemic is that everything old is new again, like jigsaw puzzles and home-cooked meals, what to make of the Mets? They’re at once old, helplessly indulging their ingrained culture of heartbreak, and new, playing this Covid-dogged sprint of a 60-game schedule and forced to trot out a boon-to-boors designated hitter, no less.

The Mets were indeed Amazin’ at first, meaning the season opener on July 24, in which the Cy Young hog Jacob deGrom dutifully mowed down the opponent but got zero run support, just like last season, before the ghost of their last World Series run, Yoenis Cespedes, returned to hit a homer as, yes, a D.H., and thus put the one-run game away, Mets-style.

None of it would last, not the pitching (loser-closer Edwin Diaz blew the very next game with just one strike to go: last year all over again), not the winning (they lost five straight to the Bosox and the Braves, one team more hated than the next), not Cespedes (he would suddenly absent himself for the rest of the season over the virus, a lack of playing time, or both).

So where does that leave us? Probably doomed. The news Monday was that the number of positive tests among the St. Louis Cardinals had grown to 13, players and staff, hard on the heels of 18 Miami Marlins players finding themselves laid low. Derek Jeter, the Marlins’ top exec and onetime Mr. Clutch for the Yankees, can backtrack and try to explain it away all he wants, they mishandled it. And now, with another Yankee legend, Don (Donnie Baseball) Mattingly as manager, the Fish, restocked roster and all, are due to flop into Citi Field tomorrow for three games.

And, just like old times, I’ll be listening to the blow-by-blow on CBS Radio 880 AM. Catch it while you can, sports fans.