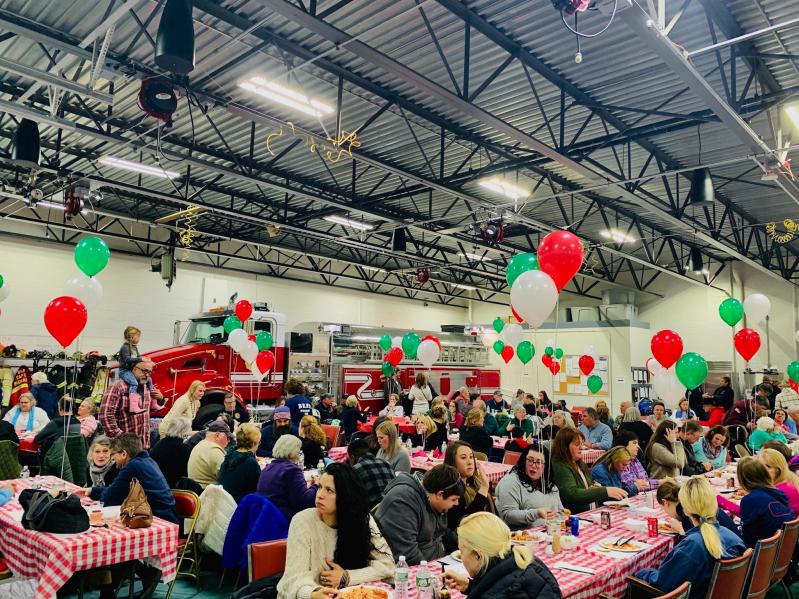 The truck bay in the Bridgehampton Fire Department was packed with people who came out to for a fund-raiser for Randy Hoffman on March 7, 2019.
Steven Weitz
By Taylor K. Vecsey

The tables were set, the auction items were on display, and the food was being prepared when I left the firehouse to get myself presentable. It had been a long few days, on top of a busy month of planning. I was nervous we would not bring in enough people to raise the kind of money we wanted to for our friend in need.

Just as I was pulling out of the parking lot, a woman drove in. Our cars were side by side. She is a former E.M.S. captain, there before I even joined the Bridgehampton Fire Department 10 years ago. We never ran calls together, but because she gave so much, I know her enough to say hello.

She was stopping by because she could not make the event; she handed me a check. I was touched just by the thought to come ahead of time to personally deliver a donation even though she could not enjoy the evening with us.

"Did you ever run calls with Randy?" I asked her.

My eyes still well up with tears at the thought of how brilliantly she put it. The E.M.S. and fire community has indeed come together to support Randy Hoffman, a critical care tech from East Hampton who in December underwent a routine spinal procedure and came out paralyzed due to unexpected complications.

The Montauk Fire Department came up with the idea for Pasta With a Purpose, a hugely successful spaghetti dinner fund-raiser in February. Robin Murphy, a longtime E.M.T. in my company in Bridgehampton, suggested we follow in their footsteps as a way to raise even more money for a man who has worked on our ambulance over the years. With Randy's blessing and that of E.M.S. in Montauk, we set a date.

So many people came together to make our event a success, starting with the fire department, which donated the food, and the hundreds of people (we lost count, quite frankly) who ate all of it.

My sister-in-law Stephanie Hemby, who is not a member, volunteered well into the night on Friday along with my husband to make the sauce, which I was told may have been some of the best sauce the diners ever had. Mike Stone, a former E.M.T. and Sag Harbor firefighter who owns the meat department at Cromer's, donated over 1,000 meatballs.

Department members pitched in, from pulling trucks out so we could use our truck bay to cleaning up and everything in between. Some spouses and junior firefighters pitched in, too. We even had a nurse from Stony Brook Southampton Hospital lend a hand. One of our paid medics and his wife got up and helped us clear dishes and serve after they ate.

We had over 125 donations for the auction — which, by the way, would not have happened had it not been for a guy named Eric Halsey from Southampton F.D., who gave me the road map. The items were big and small, from a quad from Hampton Motor Sports (owned by Robin) to gift certificates. They were mostly local businesses, but Randy's sister, Alison Stern, put out a call to her fellow artist friends in Boulder, Colo., and they sent items, too. Alison made one of the most popular items, a necklace bearing with Bridgehampton's coordinates. The wife of another paid medic donated a basket of treats she makes and a gift certificate.

The firehouse has never been so packed. I can't tell you how many people told us Randy had come to their aid on an E.M.S. call or at any accident. A man whose life Randy helped save in Bridgehampton on a call five years ago was there.

Firefighters and E.M.S. from Montauk to Flanders were in the house, too. When I rattled off the names to Randy of the departments that had members in attendance, he said, "But I don't even know anyone in North Sea."

Taylor K. Vecsey is deputy managing editor at The Star and the E.M.S. captain with the Bridgehampton Fire Department.