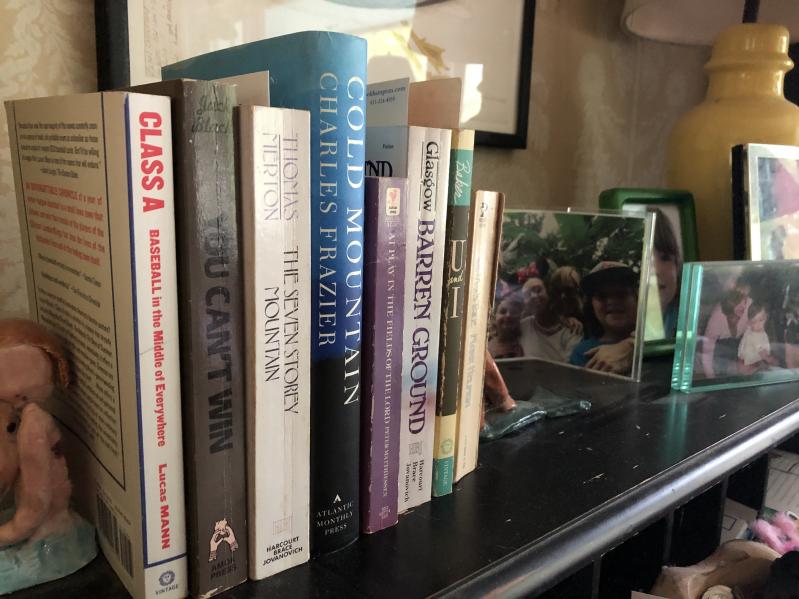 Is it a shelf where good books go to die, half-read, or a useful reminder to pick one up where left off?
Baylis Greene
By Baylis Greene

It’s time to address the odd phenomenon of the half-read book. I’m talking exactly half. Gathering dust on the shelf. Bookmark tucked into its midsection. And there’s a further divide among such specimens, between those you plan to return to and those abandoned for all time.

Some books have natural breaks, inviting you to stop, pick up a crime novel as a change of pace, and then resume, sometimes years later. I’m thinking of Thomas Merton’s “The Seven Storey Mountain.” The epic spiritual journey may be logically segmented into three parts, but no matter, I’d set it aside at page 211 of 422. Such is the pull of the halfway.

That book has stayed with me, literally and figuratively, as it’s one I’ve vowed to finish. I started it, long story short, in the late 1990s in a cabin outside Fairbanks, Alaska, which now puts me in mind of William James’s comment in “The Varieties of Religious Experience” about conversion coming in a period of isolation. I wasn’t converted, however, more like curious — not unlike Merton himself, whose curiosity drove him later in life into the philosophical arms of Chuang Tzu.

Less admirably religious are the four missionaries piercing the heart of the Amazon in Peter Mat­thiessen’s “At Play in the Fields of the Lord,” shamefully not completed by yours truly despite the handiness of my compact, fuchsia-toned Bantam paperback from 1976, its pages yellowing but, shall we say, on the list.

A novel similarly set in a jungle south of the border but which I will not be finishing is “The Mosquito Coast” by Paul Theroux. I tried, no offense to that admirable, prickly, adventuresome writer. My advice is stick to his early stuff, like the interconnected stories of Malaysia told through the eyes of an expat in “The Consul’s File.”

The question then becomes, just what is at work when you can’t close the deal? Not even with greatness? Is it whim? Distraction? Boredom? The indiscipline of the modern mind?

I may not want to know precisely what this says about me, but I’ve never failed to eagerly plow through the novels of Philip Roth and John Updike, in their entirety, in short order. So there’s that.

And yet I look up at my shelves and spy Nicholson Baker’s “U and I,” his funny pursuit of and tribute to Updike, the ultimate expression of a literary fanboy, and I can’t believe that there, poking out at number 92 of its 179 pages, is a bookmark from old Gulliver’s Books, once of College Road in Fairbanks, flagging down my desertion, chiding my readerly neglect.

Now the hour is getting late. The news of the world couldn’t be much worse. Only 87 more pages to go in that one. Let’s begin.