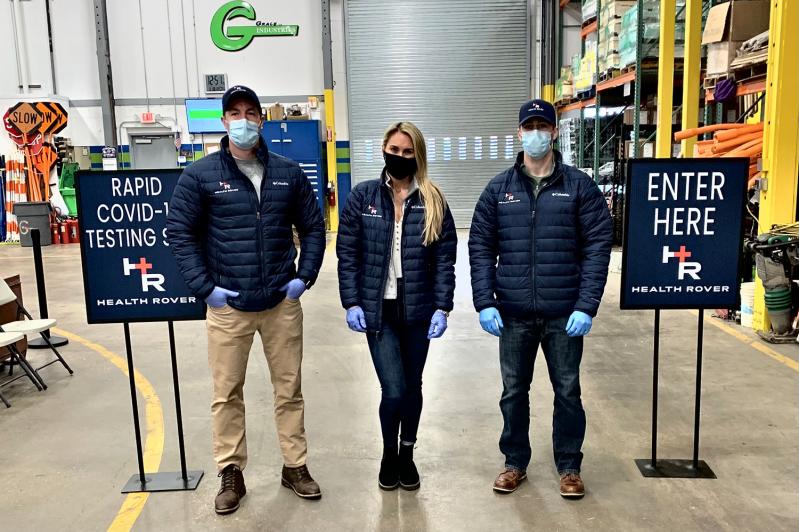 “We’re getting called to go as far as Montauk because the testing is just not accessible,” said Jamie Titus, the director of strategy and business development. The company’s main selling point on the East End has been rapid PCR tests.
Health Rover
By Jamie Bufalino

Health Rover, a health care company that makes house calls to people in need of Covid-19 tests and provides same-day results, is seeking to take the hassle out of the testing process.

The need for the company, which launched in July, became obvious early in the pandemic when testing was scarce and the ability to get quick results was nonexistent, said Brian Murphy, one of the owners. “My best friend, who’s also a co-owner, and I both knew family members who got sick, and it took two weeks to get a result,” he said. “And you had to go to a waiting room with other potentially sick people, or you had to wait online outside for three hours. We wanted to focus on rapid testing, including getting people in and out as soon as possible.”

After forming a partnership with several doctors with connections to medical supply companies, and hiring nurses and emergency medical technicians to administer the tests, they set up shop in two shipping containers. “We retrofitted the containers into medical-grade labs and we can literally pick them up and put them somewhere else in a day,” said Mr. Murphy, who also works as a financial adviser. The labs are stationed in Oyster Bay and East Northport, but the company also uses a van to provide service on the East End.

“We’re getting called to go as far as Montauk because the testing is just not accessible,” said Jamie Titus, the director of strategy and business development.

The company offers rapid antigen and rapid P.C.R. nasal swab tests. The cost at the fixed locations is $170 for the former and $250 for the latter, but prices for East End house calls will vary depending on the number of people being tested and other criteria.

The rapid P.C.R. tests have been the company’s main selling point on the East End, said Ms. Titus. “In order to get on any international flight right now, you must have proof of a negative P.C.R. test and people do not want to get tested and wait three to four days for results, they want results immediately,” she said.

Appointments can be made by calling the company, and although scheduling well in advance is preferable, “if you call and we’re already out there, we will make it work that day, and if we’re not, then the next business day,” she said.

In addition to home visits, the company can also provide workplace testing. Last week, they set up a drive-through site at the Haugland Group construction firm in Melville. “We tested 150 employees between 8 a.m. and 3 p.m., safely and efficiently, and they got their results before we left,” said Ms. Titus.

With infection rates still on the rise, demand for the business is likely to be strong for the foreseeable future, and after the pandemic, it will continue to provide other home health care services, Mr. Murphy said. “I haven’t thought too much about the future because it’s just been day-and-night Covid, but we do have a pivot plan because we’ve built this brand that people trust.” Still, he won’t be sorry to see his current business dry up. “Somebody said to me the other day, what happens when Covid’s over, are you worried?” he said. “And I was like, ‘That would be the best thing that ever happened; I haven’t slept in three days.’ ”

Hoedown on the Farm, Cocktails in the Garden
Main Beach Free Concerts in Final Weeks
Services and Counseling After Death of Popular Teacher Assistant
END_OF_DOCUMENT_TOKEN_TO_BE_REPLACED