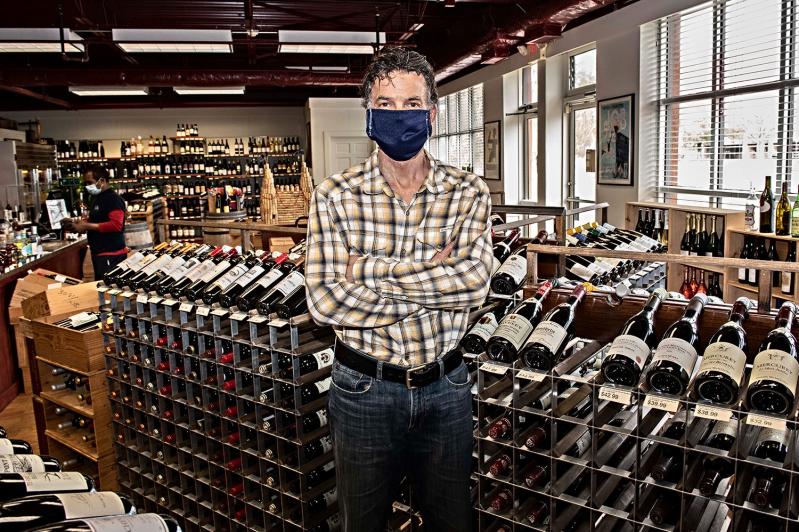 The closure of restaurants and bars, endless time at home, various distillations of apocalyptic doom — these ingredients make a strong cocktail for business at wine and liquor stores during the pandemic.

“Business is like a holiday weekend every day,” said JoAnne Braxl, the owner of Race Lane Liquors in East Hampton.

“It’s a whole other world. Well no, it’s nothing that we’re not used to — it just came two and a half months early,” said David Churchill, the owner of Churchill Wines and Spirits in Bridgehampton.

It’s all about the tequila, Ms. Braxl and Mr. Churchill both said. “We’re selling a tremendous amount of tequila. I think that people are relying on things they know without being able to walk around the shop,” Mr. Churchill said.

Another reflection of people not being able to physically explore shelves in-store are phone orders with questions like, “What do you have? What’s a good one?” which gives someone like Mr. Churchill, who has been in the business for 25 years, a good-natured laugh.

Over at Domaine Franey Wines and Spirits in East Hampton, Dan Munt, the assistant store manager, has noticed a different flavor of business. “We are getting younger clients during the pandemic, in their mid-20s to 35 who are looking for very specific, unique things either that they’ve seen in The New York Times or on Instagram.” He’s noticing specialty liquors sell more than usual in comparison to vodka and tequila. Because media outlets have written up Italian liqueurs, notably Campari and Aperol, the brightly colored cocktail ingredients are shining in quarantine.

“Aperol has been big for four summer seasons, and at this point it’s ingrained. Most people would have reached for vodka or whisky 10 years ago, but people are integrating Campari, Aperol, and Amaro. Weird stuff, not one in particular. It’s usually big for us if The New York Times writes an article about something, our business goes up dramatically,” Mr. Munt explained. “We wish it were under a different circumstance. It’s a double-edged sword, but it’s nice seeing people try to do online stuff, and we’ve assisted in supplying a few virtual tastings.”

Ms. Braxl sees the humor in the situation. “It’s not like people are running to the bottle. Some people are taking piano lessons, learning a new language, and some people are learning to make drinks.” She can tell who is new to mixing. “When they ask if vodka goes in a margarita, that’s how I know.”

Usually at Race Lane Liquors, business is comprised of 80 percent wine and 20 percent liquor, but with so many new mixologists, Ms. Braxl said she was surprised to look at the breakdown the other day and see the numbers were more like 65 to 35 wine to liquor.

More customers than usual have been buying cases of wine rather than single bottles from Race Lane Liquors, a result of people staying home for longer between trips out into the world. “The urgency of buying alcohol and wine has lightened up a little bit though,” Ms. Braxl said.

Back when the shutdown kicked in, few stores responded quicker than Park Place Wines and Liquors in East Hampton, co-owned by Donna McDonald and Tom McDonald, who are siblings who grew up in the village. Ms. McDonald, who lives in San Francisco when she’s not in East Hampton, explained that “The Bay Area got it first, so before it even was top of the mind on the East Coast, I called and said, ‘You guys, we have to get a plan in place.’ “

She had been watching the situation unfold in California, and had the foresight to take steps that, at the time, seemed drastic on the East Coast. She sent N95 masks to the store and talked to other liquor stores about what they were doing. “The first thing I did was get sanitizer and start a program for sanitizing masks, which at that point even seemed like a step too far.”

As the severity of Covid-19 became clear, people were binge-buying. And as East Hampton became a destination for those fleeing the city to ride out the pandemic, the store got crowded, too. “I saw that and thought, ‘We cannot have it. We cannot.’ “ Just five days after the masks had seemed like overkill, “it happened so fast, so many people came out to East Hampton, and we just closed down. We had no idea what it would do to business.”

With its doors firmly shut to customers, Park Place is doing curb-side pickup and home delivery. This was the third phase drafted in the store’s virus response plan, which the owners came up with as early as the first week of March.

“We’re in a time where things have to innovate,” Ms. McDonald said. Not only did she and her brother make a plan, but also early on, employees took a pledge to follow Covid-19 safety precautions at home and at work.

“I wish the village would allow us to set up outside on the sidewalk with tables to help the curbside pickup,” she said. As far as reopening goes, whenever that may be, she plans “plexiglass and directionals and obviously there’s still the sanitizer” to make customer-employee interactions as safe as they can be. Based on California’s approach, she has an entire reopening plan that focuses on controlling store traffic with tape on the floor to show a six-foot distance, and which route around the store is for traffic coming “in” and “out.” Even without walk-ins, pickup and delivery are making their own traffic, similar to a “very strong non-holiday summer week,” Ms. McDonald estimated.

This March and April, Atlantic Wine and Liquor in Amagansett did four times as much business as it did last March and April. “I have 200 cases of wine being delivered tomorrow,” Paul Tavernier, the store’s owner, said earlier this month. He has owned the store for 44 years, and said his usual delivery for that time in May would be 50 cases.

“Business is phenomenal,” and busier than in even peak summer months, Rodney Roncaglio, the owner of Wines by Morrell in East Hampton, said without hesitation. “I just had the biggest sale I’ve ever had in my 26 years.”

In driving around south of the highway, he has noticed that every house seemed to have a car in the driveway well before the typically busy Memorial Day weekend. The uptick in business wasn’t only due to panic buying, but to the fact that everyone left the city, he said. Unfortunately, scammers wielding fraudulent credit cards are shopping, too, he said.

“I think this is going to change the restaurant industry forever,” Mr. Churchill said. “People are realizing, ‘If I have to get my food to take home, then I’m going to get my wine to take home.’ Restaurants are going to get some feedback when they reopen if people have been getting a whole bottle of wine for two dollars more than the price per glass in the restaurant. For Mother’s Day, I bought three entrees and three appetizers from Bell and Anchor and it was $147. It would have been $250 easy if we were drinking wine.”

While beer is selling well, Gary Moller, the manager of Sam’s Beverage in East Hampton said, with regard to the non-alcoholic world, “I sell a lot of seltzer: Spindrift, La Croix, San Pellegrino, flavored seltzer, people are going crazy for it right now.”

Of course, as the summer season nears, pandemic or not, it’s rosé time. And even with chilly days still the norm, sales started to pick up about a week earlier than they normally would, according to Mr. Churchill.

East Hampton Samples Are a Crucial Contributor to Lyme Test
Ready to Adopt a Pet? ARF Is Ready, Too
Guild Hall's Curator Visiting Studios Virtually Through June
Seeking Stories and Images From the Time of Covid
END_OF_DOCUMENT_TOKEN_TO_BE_REPLACED