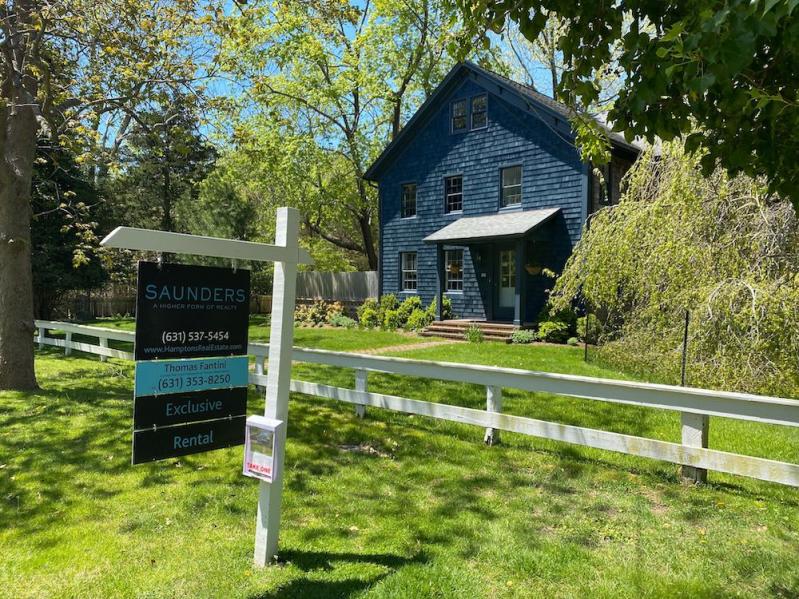 A house on Springs-Fireplace Road is still on the rental market, but judging by how things are going, it probably won't be for long.
Jamie Bufalino
By Jamie Bufalino

The rush to find an East End refuge during the Covid-19 pandemic is changing the usual rules of the real estate rental market, according to agents and lawyers in the industry. Using Airbnb is out, enlisting a savvy broker is in. Short-term bookings are out, long-term stays are in. Standard leases are out, customized ones with Covid-19 riders are in.

“Having a second home isn’t a luxury anymore, all of a sudden it’s become a need,” said Sarah Minardi, a broker at Saunders and Associates. The “mass exodus” of New York City residents to the East End is continuing, she said, and many of her clients have been asking to rent for the whole summer. “When the pandemic first hit, people rented for just March and April, but then wanted to extend their leases,” she said. And, those who had lined up late-summer rentals before the pandemic struck are now hoping to move in earlier. “They say, ‘I can’t wait until August.’"

Before online home-rental platforms like Airbnb and VRBO (Vacation Rental by Owner) existed, long-term leases were the norm, Ms. Minardi noted, and now the pandemic is bringing them back. She held a Zoom discussion of the market last Thursday, and advised homeowners looking to rent their houses right now to “forget Airbnb and VRBO.”

The demand for an East End escape has been causing tension between some tenants and landlords, according to Douglas Moliterno, a real estate attorney who joined Ms. Minardi in the Zoom discussion. After having agreed to rent their homes pre-pandemic, some landlords have decided they want to stay, and some tenants have been refusing to leave. “They’re trying to break their leases,” Mr. Moliterno said. “There’s been a bunch of that, and I’m afraid there’s going to be more.”

New York State has imposed a moratorium on evictions during the pandemic, which has left some landlords without recourse against those not paying rent. “I represent three landlords who have been stuck with cases of nonpayment,” said Carl Irace, an East Hampton lawyer. “And what happens if tenants don’t leave, you can’t even get them out because the courts are closed.”

“The opportunity for these types of problems is going to become more acute,” he predicted.

Because of the pandemic, Mr. Irace said, more leases and contracts will likely include “force majeure” clauses that free parties from liability due to an extraordinary event. “That’s something that we’ll see forever now,” he said.

In another Covid-related twist, the lawyer said he’d recently seen a lease for a commercial property that tied the rent commencement date to the lifting of the state’s executive orders limiting business activity.

A state law enacted last year that limits the amount of rent a landlord can collect up front is also complicating matters. East End homeowners have traditionally collected the rent in full for summer-long rentals, said Ms. Minardi, but now they can only charge for one month at a time. “That’s scary for everybody involved, because landlords can have a predatory tenant that you can’t evict,” she said.

Despite the challenges, the rental market is booming. People are particularly interested in renting houses with big yards where the kids can run around, as well as a pool, just in case the beaches are closed this summer. The pandemic may be adding some confusion to the rental market, Ms. Minardi said, but “the one certainty is that people want to be here.”