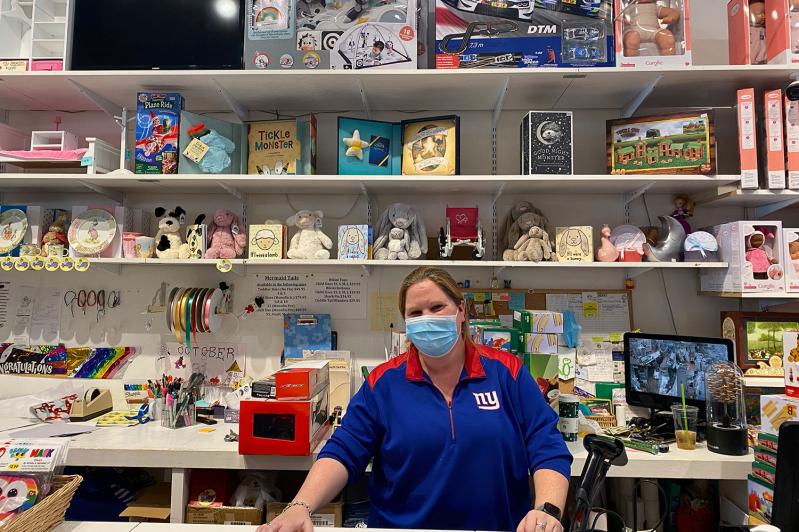 Even with coronavirus infections on the rise, mask-wearing mandates and other restrictions in place, and festive get-togethers discouraged because of the pandemic, the holiday shopping season has been surprisingly strong, according to several South Fork shopkeepers.

"It's been a really good season for us," said Michael Fellingham, the manager of Stevenson's toy store in East Hampton. The East Hampton Village Police Department provided store owners with posters that display the maximum number of people allowed inside and remind customers to wear masks and maintain social distancing, but the restrictions haven't fazed shoppers. "People are pretty acclimated to the fact that you can only have a certain amount of people in the store, and no one gives us a hard time if we ask them to wait," Ms. Fellingham said. One of the store's big sellers this year is Toniebox, a device that plays songs and reads stories to toddlers. "They're selling like crazy," she said.

At Peserico, a women's clothing store in the village, a common refrain among customers has been, "We don't go anywhere, why are we shopping?" said Tess Gianiks, the assistant manager. But shop they do, she said. "Now that it's getting a little chilly, they're interested in outerwear," she said. "Great looking outerwear is something you can put on over anything including sweatpants and a sweatshirt." Foot traffic hasn't been quite as strong over all as in years past, but the Sunday farmers market that was launched this fall in the Reutershan parking lot has helped. "We have noticed an uptick in customers on Sunday," she said.

Since Black Friday, the official start of the holiday shopping season, the village police have stepped up enforcement of mask-wearing guidelines. "We're getting 99 percent cooperation from people on the street, and the other 1 percent comply after being approached," said Police Chief Michael Tracey at a village board meeting last Thursday. "On Black Friday, [the police] stopped 59 people on Main Street and Newtown Lane and informed them that they were in violation of the Covid rules, offered them masks if they didn't have any, and they complied," added Mayor Jerry Larsen. "That's really important because we want to keep our businesses open, and residents and visitors safe."

In Sag Harbor, business has been brisk at the Wharf Shop, said Gwen Waddington, who owns the toy store with her mother, Nada Berry. "People are making a conscious effort to shop locally, some of them are year-round residents, and others have escaped the city and have discovered us and are supporting us." The village's Chamber of Commerce has organized several Friday night shopping events that have helped boost the bottom line. "I had a customer come all the way from Port Washington because they had heard that we had an event going on," she said. Customers have been good about wearing masks, but keeping children from handling items has posed a few problems. "I received an email from the New York State Department of Health that wrote out in plain language, 'Try to keep your customers from handling items unless they're going to be buying them,' " she said. "I have had a couple of customers get upset when we asked children not to pick up so many items. Two left and said they would never shop here again."

Lynda Sylvester, the owner of Sylvester and Co. Modern General in Sag Harbor said her loyal customers have rallied behind the business throughout the pandemic and into the holiday season. "They've worn their masks, used hand sanitizer, and have been patient with the staff," she said. "Life on Main Street may never be the same but the upside is the community is closer."

Stores in Montauk haven't had as much success as elsewhere on the South Fork. "It's been pretty quiet," said Tom Flight, who owns several retail shops including the Homeport home furnishings and the Captain Kid toy stores. Although the stores' branches at the Gosman's Dock shopping center usually stay open until Christmas, they have closed early this year, he said. That hasn't dampened his holiday spirit, however. His stores are offering a promotion to benefit the Montauk Food Pantry. "If you buy anything from the store for the food pantry, you get 15 percent off and we'll donate it to them," he said.

At Kai-Kai Sandals in Montauk, "the week before Thanksgiving was busy with a lot of people buying Christmas gifts, but for the past week it's been quiet," said Shanna Davis, the manager. "You have a lot of people who come out because they don't have anything else to do," she said, but sales have not been booming. "We'll see, maybe in another week as it gets closer to Christmas, but with the virus and everything we just have to keep our fingers crossed."

Hoedown on the Farm, Cocktails in the Garden
Main Beach Free Concerts in Final Weeks
Services and Counseling After Death of Popular Teacher Assistant
END_OF_DOCUMENT_TOKEN_TO_BE_REPLACED