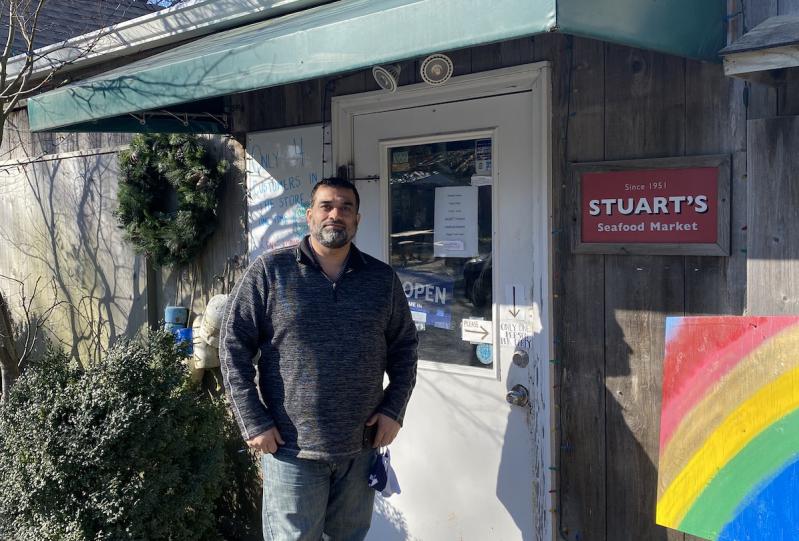 Rashid Sulehri, the new owner of Stuart’s Seafood Market, discussed his plans for the store on Saturday.
Jamie Bufalino
By Jamie Bufalino

Stuart's Seafood Market, an Amagansett institution since 1955, is under new ownership, as Rashid Sulehri, the owner of Villa Italian Specialties in East Hampton, purchased the business earlier this month.

Founded by Stuart Vorpahl Sr., a descendant of one of the area's first settlers, the market had been owned by Charlotte and Bruce Sasso since 1997. They listed it for sale for $6.99 million in late 2018. Mr. Sulehri also owns the Montauk Bake Shoppe and the Fro-Yo and Gelato store in Montauk, and the Beach Bakery and Grand Cafe in Westhampton Beach.

The transaction was finalized on March 5, Mr. Sulehri said, but he and his team have been at the market since Jan. 1 learning the tricks of the trade from the Sassos. "Stuart's has been a go-to place with a really good reputation, and Bruce and Charlotte have done a great job of building the facility, the clientele, and the reputation," he said. "We wrote a big check for the real estate, the business, and all the business secrets including the recipes, and how they're successful and why they're successful."

While the core business will continue to be selling fresh seafood, Mr. Sulehri said the market will soon offer more prepared dishes. "You'll be able to get fish and chips, and fish tacos and shrimp tacos, and several different fish entrees," he said. "Right now, if you came in and asked for fried cod, it would be 'No sir, we don't have it,' but give us two to four weeks and we'll have it."

The market will also offer fresh baked goods. First-floor office space is being eliminated to make room for a branch of the Montauk Bake Shoppe. "When you come in, on the righthand side there'll be a bakery, and we'll have jelly doughnuts, made-to-order cakes, and fresh breads at 6 o'clock in the morning every day," he said.

Customers will also be able to place orders online for the first time. "Right now, if you don't have online ordering, you may be behind the competition," Mr. Sulehri said. "If someone only has 30 minutes for their lunch break, as a restaurant owner, I want to make sure that that person places an order, comes in, picks up the food, eats, and is back at work in 30 minutes," he said. "We have to do all the right things to facilitate our customers."