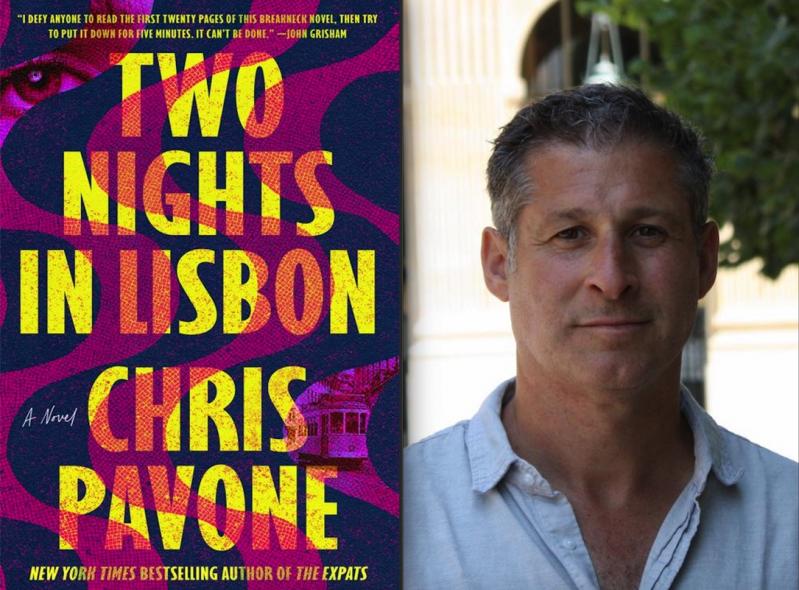 I wouldn't want to be on the bad side of this thriller's main character, Ariel Pryce, formerly known as Laurel Turner. Or her second husband, John Wright, previously known as John Reitwovski. Chris Pavone's "Two Nights in Lisbon" builds a devastating portrait of a woman who chooses to leave her world of material comforts behind but carries with her an inner landscape of fear, rage, and revenge.

The author also provides a stabbing commentary on American society's "masters of the universe" and the political operatives who protect them, trophy wives, cruel parents, and unscrupulous reporters, among other targets. Over all, almost no one is spared judgment, other than two family dogs named Scotch and Mallomar (whose names have not been changed).

As the novel opens on "Day 1," Mr. Pavone quietly introduces Ariel after a late night of lovemaking with her husband. We know the exact time she awakens, as it's displayed "in emergency red" on the bedside clock. From this visual, she offers a scan of their luxurious hotel suite in Lisbon, Portugal, with walls "painted a shade of pale gray that's so luminescent it's like being inside an oyster shell."

In the first scene, the author establishes his unique and captivating style: nearly slow-motion, evocative descriptions of place, characters, and events. The reader learns quickly, though, that these narratives are frequently broken by quick, even violent events, paranoid thoughts, and other disruptors.

This mirrors the life — and mind — of Ariel, whose almost dreamlike observations are interrupted by the "fast frigid water" of doubts about her relatively new, and younger, second husband. "What if she's wrong about him? About this whole thing?" Her cryptic and startling questions, contrasted with her surroundings, create an immediate sense of unease that continues throughout "Two Nights in Lisbon" and haunts the damaged character.

She has been wronged. Wronged very badly. We learn that from age 13 she suffered two sexual traumas, both completely discounted by her parents. She suffers another humiliation while auditioning for an acting role after college. While we don't learn of the final, shattering event that propels her trip to Lisbon until much later, the narrator describes Ariel's complete emotional devastation: Her "father, her mother, her husband, her friends . . . her whole life. She had been silenced by operant conditioning, by receiving the same response again and again, like an electroshocked lab rat, or a beaten dog. A disbelieved woman."

Ariel's view of herself plays heavily in the drama that unfolds as she finds her husband missing on the first morning of a business trip. She must navigate uncooperative and suspicious local police, nonplused staffers at the U.S. Consulate, and a duplicitous American reporter. All those she approaches for help doubt her story, sometimes heartlessly. Her apparent ineffectiveness as an advocate for herself and her husband seems palpable.

That is, until, using a clever ruse, she brutally bloodies a man she suspects is following her (he happens to be from the U.S. Embassy), the "sound of teeth cracking upon one another." While this might seem like an overreaction, the reader understands that Ariel's perceptions have been set by the degrading events of her past.

This early scene serves as a warning of the character's underlying anger that sparks, then explodes, when she faces a perceived threat from a man, whether physical or emotional. She is determined to be "a woman who knows how to defend herself. Even how to kill someone, using nothing but her bare hands."

In a flashback to a harrowing scene at her remote farmhouse, she successfully fends off a local repairman who arrives uninvited. She tries her words first, to no effect. Then, in order, she first knees him in the crotch, bashes his nose with her palm, then proceeds to clobber him with a cast-iron skillet. But that's not the end of it.

"Beg, motherfucker. Beg me not to kill you," she orders, before she rushes to his truck and finds a handgun in the glove compartment, facing her attacker until he abandons his plan.

Her determination and ferocity don't always take a violent form. In another memorable episode, in Sunday night traffic out of the Hamptons back to Manhattan, she directs her first husband, Buckminster (Bucky), to stop the car on Route 27. Mid-conversation, she unlocks the vehicle, steps out, and grabs her overnight bag from the back. She leaves both doors wide open and walks away, never to see him again.

"You can't know how horrible someone is until they're given an opportunity to be horrible . . . she'd been hoping to go her whole life pretending she didn't know that Bucky was a terrible person, hoping to never confront the evidence." Sadly, he, too, doubts her as she reveals her vicious rape at the hands of his business associate (who later becomes a major cabinet secretary and eventually a candidate for vice president).

Through Ariel's experiences, the author astutely describes the gaslighting rape victims face: "You lose faith in yourself, in your capacity to see the world clearly, to understand it correctly. You begin to think that somehow you're broken, that there's some deficit in your intellect. . . . It's your interpretation that's faulty; you misunderstood. You asked for it. . . ."

We learn that after this, she "emptied her life completely and started from scratch, filling her new existence one piece at a time — a new old house in a quiet new place, a new baby . . . a new hairstyle and wardrobe, a new career in a new field. New friends and hobbies, a new way of holding herself. . . ." In addition, she rejects her "city" attitude and appearance, including her obsessive attention to physical attractiveness through diet, jewelry, clothes, makeup, and "relentless" exercise.

The character's relationship with her appearance, both before and after she assumes her new identity, emerges as another major theme. Although the author does not describe her physicality, we know that she is considered beautiful, and that this attribute coveted by many has resulted in her extreme suffering at the hands of men. Her experiences over time, including her two nights in Lisbon, confirm her immense struggle for freedom from this and many other forms of oppression.

The entire adventure abroad with her second husband and the unexpected turn in the last portion of the story completely surprised me. I want to believe she won in the end, quite brilliantly. I may need to reread the novel to make sure I'm right.

Lisa Kombrink, an attorney and previous book reviewer for The Star, lives in Southampton Village.

Chris Pavone's last novel was "The Paris Diversion." He lives in Orient and New York City.