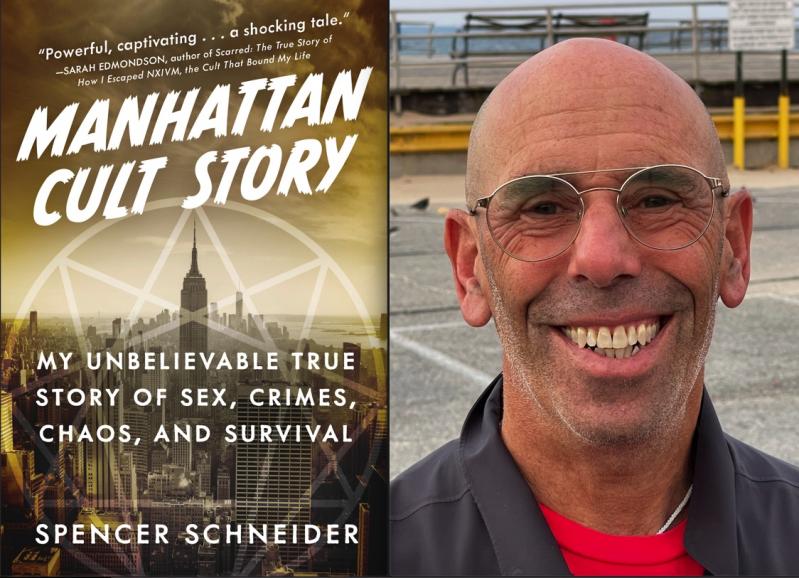 "We don't need no thought control." Did you finish the rest of the verse? I'll bet you did. When you're my age it's hard to stop that sequence of words once you start. All those years of FM radio repetition seem to set it in motion. Let's do the last line together, yeah? "Hey, teachers, leave those kids alone!"

Except in the case of the new memoir "Manhattan Cult Story" by Spencer Schneider, the line should be, "Hey, teachers, leave those well-off and well-adjusted white yuppies alone!" I mean, hasn't this group suffered enough?

Well, in this book we learn that there is now a formidable foe on the food chain preying on them in the form of a clandestine cult dressed up as an exclusive adult education class. The course is designed for people who seek a deeper understanding of themselves and their purpose in life, have an unyielding desire for connection and community, and through nightly study and a daily discipline will ultimately tap into the totality of their true power.

That's the pitch, anyway. What it ends up being is a kaleidoscope of Buddhism tangoing with Tony Robbins hitched to a pyramid scheme of hierarchical cloak-and-dagger group dynamics, a la Scientology, that eventually spirals into a grown-up version of "Lord of the Flies" in a Tribeca loft. All that for a mere $500 a month.

The cult is simply called "School," and their intrepid, tireless soul-search is referred to as "the Work," and, of course, "Shh, it's a secret," like "Fight Club." I mean you don't just go blurting out the meaning of life to the next slob on the subway, right? Members are groomed then gradually recruited, made to feel special and chosen based on their radiant intelligence (perhaps a sheepskin or two on the wall puts fins in the water?) and a hunch by School's recruiter that they possess an eagerness and a willingness to earn . . . sorry, I mean learn.

To close 'em they throw in that these types of esoteric schools are of an ancient order dating back to the dawn of reason whose members included important shapers of our humanity such as Plato, Rembrandt, and Shakespeare. Quite the alumni! So there you go, a little ego massage with the added cachet of cordoned-off exclusivity, and . . . sold! That's sales 101.

All right, I'm having a little fun taking the piss out of this cult, I admit it, but let's face it, it's hard to resist based on who the marks are. How often do the rich intelligentsia get theirs? As sure as curiosity killed the cat, so did School bilk Spencer Schneider, a corporate lawyer, out of most of his time and money for 23 years. But the question is, do we care? Some demographic groups just don't illicit much sympathy, truthfully.

We can all confess to enjoying the hell out of the Fyre Festival fiasco of a few years ago, where eight thousand rich, serial social-media posting, self-important-narcissist-wankers got beat buying into a fraudulent "exclusive luxury island music package," can't we? I'm sure not all of them were like that, but the quotient was high enough to make the sweeping statement. I watched both documentaries on it. Simply delicious.

So sympathy doesn't come easy here, at least not from me, and it's only made harder when you find out that a main tenet of School's philosophy is that the rest of the human race (that's us, folks!) is "asleep," lowly mammals trudging from task to task, blissfully unaware of what's at stake. Doesn't make the School gang any cuddlier to know they walk among us, smiling in our faces while considering us troglodytes of the first order. But, that said, and now this is gonna sound like a total 180, I really enjoyed the book.

The reason I liked it is because it's an uncommon story. It cuts a different swath through the usual cult narrative of: damaged and dough-eyed upon entry, then slowly buying into the collective brainwash, then a total immersion into the warped hive mind crescendoing to an ultimate betrayal by a trusted cult friend (usually the person who brought you in) that brings about a moment of clarity and the bubble bursts.

Mr. Schneider's tale is subtler and more insidious and he tells it with a straightforward honesty, full well knowing that a-holes like me might snap-judge him. That is a very brave endeavor indeed, and he accomplishes his goal of cautioning others to the trappings of a place like School. He's not a flashy yarn-spinner but is a likable guy who advances the narrative swiftly and efficiently.

However, I must inform that the "Manhattan Cult Story" subtitle of "My Unbelievable True Story of Sex, Crimes, Chaos, and Survival" does belie the contents inside a bit. No such crucible exists within those pages outside of some vague I.R.S. investigation of School's finances (which in the book is not resolved, so it's uncertain even whether there was ever any infraction found), and there are no descriptions of crazy group sex or passages about violent crimes of coercion being committed by goon zealots of the cult (as has been reputed in Scientology, etc.), as one may infer from that slightly misleading subtitle. Instead, they engage in activities like going on retreats to build elaborate structures or putting on end-of-quarter concerts and plays in their meeting place, not exactly "Eyes Wide Shut."

What is extraordinary is you do have a bunch of otherwise normal and upstanding New York City white-collar professionals — attorneys and C.P.A.s, real estate brokers and hedge fund managers — lapping up the outlandish line of bullshit being brought forth by their charismatic boozebag-bloviator-messiah, one Sharon Gans. Mr. Schneider and the other cult members blindly allow their whole lives to be governed and subsequently ruined by her, a fascinating unraveling.

Wait'll you meet her. She's a moth-eaten former actress in her 60s with a musty and perfumed mane of fire engine red hair, spawned and spit out into the world at Haight-Ashbury, who chain smokes, compulsively eats cheese and swills vodka while spewing her deranged and deluded logic onto her flock, the faithfully due-paying students of School. She's seen by them as an almost deity, on a level with Buddha, but in fact is more Joan Crawford in "Mommy Dearest" meets Bea Arthur in "The Golden Girls" with a Sam Kinison streak of menacing comic evangelism.

She meddles in all their lives, instructing them to leave relationships and marry or just fornicate with each other, all with disastrous results. Some leave over it, but most keep coming back for more. She isolates and dresses them down in class when someone stands up and challenges her opinion and dubs them not to be "working on themselves" while the rest of the class then joins in a chorus of ridicule for that person, reducing them to a rubble of tears and zero self-worth. Then they get up the next day, go to their office, and do your taxes. It's insane.

While reading these sequences I couldn't help but think of that old Monty Python bit where the guy goes to the argument clinic and walks through the office door into a merciless ambush of insults by the person at the desk, and the guy says, "I've come here for an argument," and the person at the desk quickly apologizes, "Oh, I'm sorry. This is abuse. Arguing is next door."

That's what the whole thing seems like to me, and they made this Sharon Gans a multimillionaire with their dues, hanging on her every word like it's the New Testament to our times. She's cult of personality plus.

I'm incredulous at the notion of all this, but don't mean to be dismissive of the pain Mr. Schneider suffered at the hands of Sharon Gans and the other teachers at School. I know that it's real and it took a summoning of courage to tell his story. He also reveals a teenage trauma that may have even led him there. He is to be commended for that, and I do believe it could end up helping people. Who among us hasn't stayed in a job or relationship too long? How many of us have fallen under a spell where we ended up believing in and listening to the wrong people way past the point where it made sense? We've all been gaslighted to some degree in this life at one time or another. Let they who haven't cast the first stones.

At the end of the book, Mr. Schneider lists "Nine Telltale Signs You're in a Cult" to help those who might not be recognizing that they are in one — a conscientious public service and a nice piece of punctuation to his book. I'm gonna join forces with him and offer you this. I've lived cult-free for five-plus decades, and I've done so by adhering to this one simple thing. When someone steps to me claiming to have "the answer," my response is always the same: "I didn't ask the question, asshole."

Christopher John Campion, a singer-songwriter and regular visitor to Amagansett, is the author of "Escape From Bellevue: A Dive Bar Odyssey," published by Penguin-Gotham.