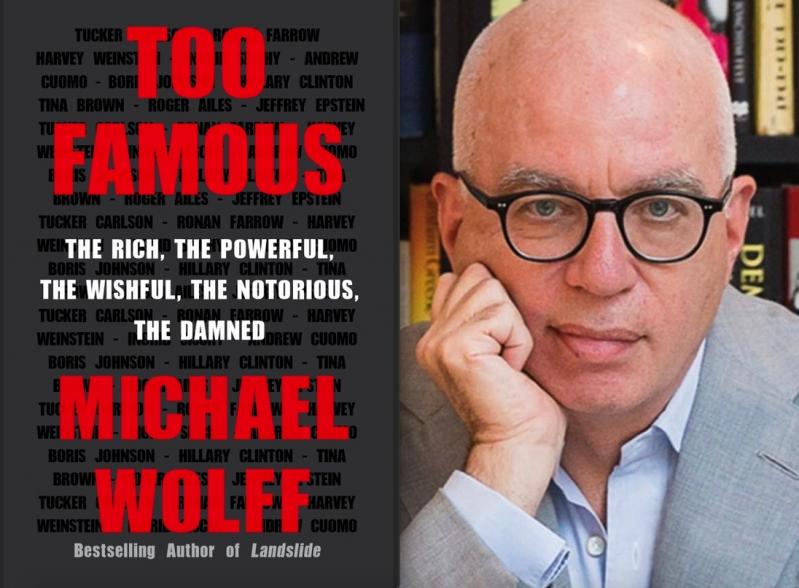 The adage that politics is show business for ugly people comes to mind regularly during a read of Michael Wolff's "Too Famous: The Rich, the Powerful, the Wishful, the Notorious, the Damned." In his telling, however, that observation applies to a much broader population, taking in stars of the worlds of finance and, especially, media.

Mr. Wolff, who owns a house in Amagansett, scored a hit with "Fire and Fury," his 2018 account of the early days of the singularly chaotic Trump administration, and two others on the former president's four-year reign. "Too Famous," much of which compiles pieces that previously appeared in New York magazine, Vanity Fair, British GQ, and The Hollywood Reporter, offers a similarly insightful and always judgmental look at figures including Mr. Trump, the former New York City Mayors Rudy Giuliani and Michael Bloomberg, Hillary Clinton, and former New York Gov. Andrew Cuomo, but also media figures like Tucker Carlson, Roger Ailes, Ronan Farrow, Rupert Murdoch, Christopher Hitchens, and Harvey Weinstein.

The ultimate insider, or "New York media scenester," as The New York Times referred to him upon the publication of "Too Famous," Mr. Wolff offers a fascinating if sometimes maddening fly-on-the-wall look into characters and situations, and some examples of the strange and particularly icky bedfellows where politics and media collide. This reaches its zenith, or nadir, in a previously unpublished, bizarre account of the last days of Jeffrey Epstein, the late pedophile and friend or adviser to the hyper-powerful.

Fascinating to those of us unlikely to experience the heady and wholly unnatural state of fame, or infamy; frustrating because Mr. Wolff often comes across no better than the louche characters under his microscope. Sources are in short supply, leaving the reader to wonder just who was there and how, or if, conversations have been reconstructed and such details conveyed. Is it the pure sleaze of his subjects or his smug knowingness that is grating? I cannot decide.

But if the ultimate insider's dispatch on the denizens of the tabloid universe constructed and maintained by the likes of Mr. Murdoch, the late Ailes, and the former Trump administration adviser Steve Bannon is your thing, Mr. Wolff is your man. He does seem to enjoy the "ritual disemboweling" of Mr. Bloomberg to which New York magazine assigned him, around the time of the multibillionaire's spectacularly financed yet embarrassingly brief presidential run.

A long piece on Mr. Giuliani — whose very public meltdown might inspire at least a dollop of compassion — is indicative of Mr. Wolff's unforgiving style. And yet his subjects are often so far beyond the pale, how could he not deploy his sharpest daggers? "In what seemed like an unglued spiral of digression, free association, conspiracy mongering, weird moments in which he appeared to be speaking to himself, he often, also, seemed to casually sacrifice the president's interests," he writes of Mr. Giuliani, who had assumed the role of the president's personal attorney. "The president, too, seemed alarmed. 'He looks like a mental patient,' declared Trump after one Giuliani television appearance."

Mr. Wolff is deft at distilling and summarizing just how thoroughly the grown-ups have too often failed all of us. With growing scrutiny of Russia's involvement in the Trump campaign and other mounting existential, yet mostly self-inflicted crises, "the man representing the president in that investigation was engaged in an array of discussions and arrangements with similar foreign interests. The convergence here of so many points of self-interest, indefensible practices, and high-risk behavior was so bold and extreme that it seemed to all, except Giuliani and the president, a countdown to destruction."

With Mr. Giuliani standing out in an administration characterized by extreme dysfunction, the qualified quickly give way to hacks and yes men "who all understood that Rudy had come to occupy a unique place in the Trump ecosystem that they needed to accept." Was anyone surprised when Mr. Giuliani later held a press conference outside a Philadelphia landscaping company, near a crematorium and a purveyor of sex toys called Fantasy Island?

In a piece on Mr. Bannon, Mr. Wolff notes that Mr. Trump's 2016 fund-raiser at Woody Johnson's Highway Behind the Pond, East Hampton Village, residence was a bust. "Virtually no one showed up," he writes, "a humiliating moment for Trump," who nonetheless "promptly agreed to make Bannon the head of his campaign."

But the best, or worst, is saved for last. Forty-five pages are devoted to Epstein, and once again Mr. Bannon is in the thick of it. Is there a better representation of the pure amorality of some members of the human family circa early 21st century than a 2019 meeting of Epstein, at his Upper East Side mansion, with the attorney Reid Weingarten and the former Israeli prime minister Ehud Barak in person, and Mr. Bannon via conference call, all strategizing to humanize and help Epstein slip a tightening noose?

Epstein, living in a hermetically sealed bubble following his 13-month stint in prison for a prostitution charge and seemingly barely interested in or cognizant of his growing peril, is flippant as Mr. Bannon matter-of-factly goes about damage control, a planned media campaign to soften Epstein's image. "He's been branded a pedophile — while in fact these are not underage or barely underage," Bannon says. "I'd rather have that discussion about what is a pedophile than for people just to assume he is one. . . . Does the fourteen-year-old look close to eighteen or to fourteen?"

Two weeks later, Mr. Wolff writes, came a most surreal mock deposition, Mr. Bannon questioning Epstein about his work, his (mostly unsavory) clients, his stratospheric wealth. Later, Mr. Bannon tells Epstein that "You have fallen into the worst trap you can fall into. You are actually answering the questions. You're thinking you're being funny or ironic, but everything that you think is wry and clever they are going to cut to make you look unfeeling, cruel, weird, grotesque."

Epstein briefly seems to grasp the gravity of his predicament, before fixating on a bird at the window. His detachment, incredibly, continues until 30 minutes before his arrival, from Paris, at Teterboro Airport in New Jersey, when the pilots are asked to confirm that he is on the plane. Why he returned from Paris at all is a mystery, particularly after Mr. Wolff recounts a discussion Epstein had about countries from which he could not be extradited.

How Mr. Wolff came to reconstruct such events with such detail is not disclosed. If he was not there, how did he obtain the transcript? To borrow another adage, never let the truth get in the way of a good story. That is not to cast doubt on the accuracy of Mr. Wolff's lively profiles in "Too Famous," and in fact his access to the figures depicted within is envious. But one is left with those aforementioned mixed feelings, fascination and frustration. Maybe that is the only rational response to what "Too Famous" reveals.

A Conference for Young People to Create Solutions
Get Outside, Get Moving
Two Traditions, One Fair in Springs
END_OF_DOCUMENT_TOKEN_TO_BE_REPLACED