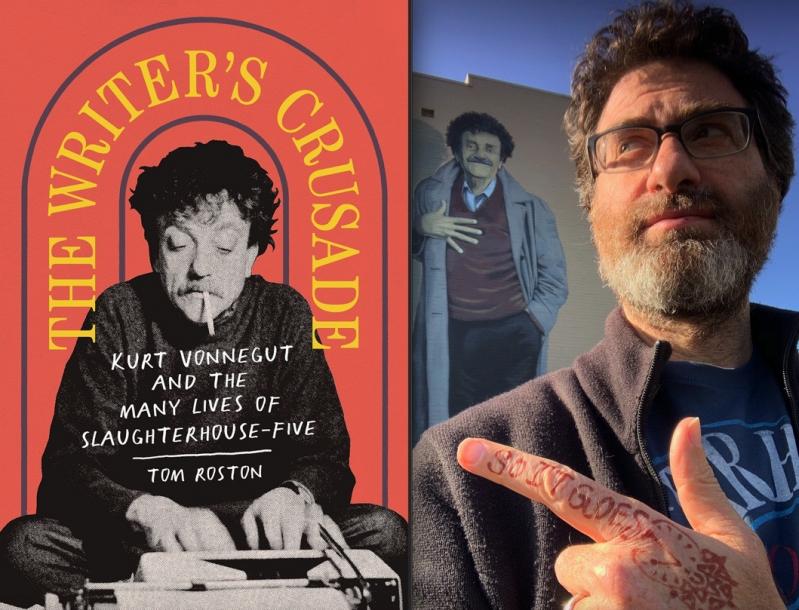 Kurt Vonnegut was captured by the Germans at the Battle of the Bulge in December 1944. Along with other prisoners of war, he was transported to Dresden, where he survived the Allied firebombing of the city during February of 1945 while in a meat locker beneath a slaughterhouse. After the bombing, he and his fellow P.O.W.s were forced to remove and burn the dead and help clean up the ruins of the city.

His time as a P.O.W. was a turning point in Vonnegut's life, and he struggled for 23 years to successfully complete a book about his war experiences. When he finally did publish that book, in 1969, "Slaughterhouse-Five" would become not only his most celebrated work but also a recognized classic of modern literature and one of the pre-eminent antiwar novels of all time.

An influential and beloved novel such as "Slaughterhouse-Five" elicits a great deal of attention in both popular culture as well as the academic community. Vonnegut's portrayal of war and its effects are, of course, often the primary focus of that attention. Tom Roston, in his new book, "The Writer's Crusade: Kurt Vonnegut and the Many Lives of 'Slaughterhouse-Five,' " gives us an important addition to the literature on the novel and its author.

"Slaughterhouse-Five" is many things to many people: part autobiography, science fiction, black humor, antiwar novel, and social commentary. Following Vonnegut's example, Mr. Roston also gives the reader a book that encompasses many things — simultaneously biography, literary analysis, an inquiry into the creative process, and a concise history of the perception and recognition of war trauma and the development of the concept of post-traumatic stress disorder. He writes with informed insight as well as wit, and his tone is light and engaging despite the seriousness of the subject.

The book's title and subtitle are not really indicative of its primary focus and may mislead some readers as to what to expect. Mr. Roston presents "Slaughterhouse-Five" as a central text in our understanding of war or combat trauma. He examines the effects of war on Vonnegut's main character, Billy Pilgrim, and given what Vonnegut describes in the novel, posits the question of whether Billy suffers from P.T.S.D. The further part of the question, however, is if Billy does have P.T.S.D., given the autobiographical relationship between the character and the author, what does that reveal, if anything, about Vonnegut and the possibility of his having had it as well.

Crucial to an understanding of Mr. Roston's examination of Vonnegut's life and war experience and their relationship to the novel is an understanding of P.T.S.D., which he terms the "signature mental disorder of our age," and its place in our society. These chapters of the book are not meant to be an exhaustive discussion of the subject, but they do offer an interesting examination of the development of the idea of war trauma, particularly in the United States, Great Britain, and France, and provide an important focal point of the book around which the specific questions regarding Billy and Vonnegut revolve.

In examining these questions regarding the novel, Vonnegut, and war trauma, Mr. Roston relies not only on his own reading of the novel but also deep and resourceful research. As one would expect, he turns to previous work by Vonnegut scholars and biographers, such as Jerome Klinkowitz, as well as psychological research regarding war trauma and P.T.S.D. He also makes use of early drafts of Vonnegut's manuscripts at the Lilly Library at Indiana University and engrossing discussions with Vonnegut's three oldest children.

Beyond this, and what brings a certain distinction to his examination of the subject, Mr. Roston relies extensively upon discussions he had with various authors who are also combat veterans and who have some affinity for Vonnegut's war experiences, most notably Tim O'Brien ("Going After Cacciato"), Karl Marlantes ("Matterhorn"), and Phil Klay ("Redeployment"). He integrates into his general discussion their thoughts on the impact Vonnegut and "Slaughterhouse-Five" had on them and their thinking and writing about war, as well as their own thoughts on war trauma.

Mr. Roston's research along this path also brings him to two currently lesser recognized veterans who are also emerging writers, Matt Gallagher and Matthew Mellina. His discussions with Mr. Mellina, who lives in Ronkonkoma, concerning his war experiences and P.T.S.D. diagnosis are particularly affecting, providing strong evidence of the importance and lasting significance of Vonnegut's novel and the truthfulness of his depiction of the effects of war trauma. Indeed, Mr. Roston suggests that the influence of "Slaughterhouse-Five" has been so great as to have contributed to the defining and acceptance of P.T.S.D. as we know it today.

This year is the centennial of Kurt Vonnegut's birth. Perhaps that will foster some renewed interest in him and his work, particularly "Slaughterhouse-Five," which has slackened a bit in recent years. If so, Mr. Roston's "The Writer's Crusade" provides a thoughtful head start for a renewed appreciation of the author and his best-known work.

William Roberson, who taught literature at Southampton College for 30 years, is the author of "Walter M. Miller, Jr.: A Reference Guide to His Fiction and His Life."

Kurt Vonnegut lived in Sagaponack. He died in 2007.