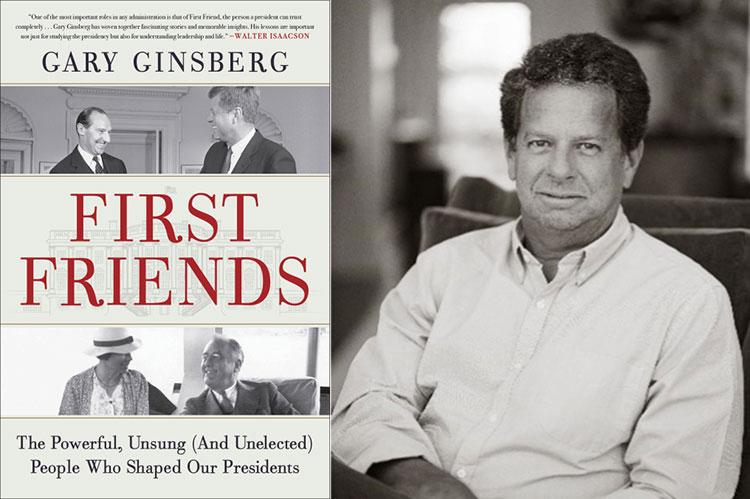 Plenty of ink and screen time has been spent on some of those closest to American presidents — first ladies, first sons and daughters, even first pets — and of course some top subordinates and official advisers. But surprisingly little on the personal friends presidents may rely on for savvy, unselfish counsel that can impact policy, the nation, and the world — or simply aid in the relaxation, distraction, and intimacy so physically and emotionally beneficial to one bearing the burdens that with the White House come.

Among those who first focused Gary Ginsberg, a writer, editor, and lawyer, on the importance of "First Friends" was the veteran White House hand Harry McPherson when both were vetting Tennessee Senator Al Gore as a potential V.P. candidate for Bill Clinton. When Gore could not name any close personal friends beyond two Capitol Hill colleagues, Mr. Ginsberg recalls, McPherson worried: "If he can't develop or even claim one real friendship, how's he going to lead a nation?"

Despite that deficiency — and after turndowns by Bill Bradley, Jay Rockefeller, and Colin Powell, Mr. Ginsberg notes — Mr. Gore was the man chosen. Ironically, perhaps, because Mr. Clinton was probably the most assiduous/aggressive/obsessive collector of friends in Oval Office history, Mr. Ginsberg finds, driven by the conviction that any or all might prove helpful on the political journey he'd been on from boyhood. And hundreds did flood in to win him a better-than-expected second place in New Hampshire's 1992 Democratic primary.

And yet, again ironically, it was Mr. Clinton's first friend as president, the civil rights leader Vernon Jordan, who collected Mr. Clinton. Having first met Hillary, later impressed by Bill's political potential and inbred sensitivity to racial issues, Jordan stepped in to keep the younger man from quitting politics cold after losing a 1980 bid for re-election following his first term as Arkansas governor. "You got any grits down there?" Jordan famously boomed in a call inviting himself for breakfast and a heart-to-heart.

In time he would introduce the pre-presidential Clinton to world leaders at a Bilderberg Meeting in Europe, be his sounding board and buddy in the White House, then stand by him during an impeachment trial on charges of lying about intimate relations with a White House intern, Monica Lewinsky, for whom Jordan helped land an outside job at Mr. Clinton's request, but successfully denied knowing about the dalliance behind it.

Great lawyering given that a favorite topic of the two fellow charmers, on and off the golf course, was sexy women, or as Mr. Ginsberg reports Jordan saying: "We talk p_ _ _y." (Fill in the missing letters yoUrSSelf.)

The Clinton-Jordan tale comes last in Mr. Ginsberg's book, but it was hard for me not to start there because Mr. Clinton's first friend was my friend first. Covering Vernon for a Newsweek cover story in 1973, I visited both Richard Nixon's White House and Jordan's own house in Westchester County for a family breakfast and my first taste of grits, a reminder of Atlanta roots he never forgot.

In detailing the course of nine key first friendships, drawing extensively on troves of personal letters and diaries, Mr. Ginsberg humanizes some familiar and not-so-familiar names in American history — most notably Daisy Suckley, Franklin Delano Roosevelt's distant cousin, Hudson Valley neighbor, constant comfort and joy — and provides an insightful, entertaining refresher course on the trying times in which they figured, from birth of the nation through Civil War, two World Wars, Watergate, and beyond.

He begins with two founding fathers, Thomas Jefferson and James Madison, both loyal sons of colonial Virginia, each later to become president of the United States, in key ways different but complementary. Jefferson was the elder, taller, more eloquent and charismatic; Madison more recessive, with many ailments and self-doubts ("gloomy stiff . . . the most unsociable creature in existence," wrote the wife of a fellow Virginia pol), but steady, politically adept, and persuasive.

They consoled each other over personal losses and shared a love of books, walks, and "lighthearted conversation," all of which helped them reconcile their own political differences — and the nation's.

National unity was on the menu in 1790, Mr. Ginsberg reminds us, when Jefferson overcame his distrust of overly powerful central government to set the stage at a meal in his New York home for the "dinner table bargain" by which Madison agreed to support Alexander Hamilton's plan for a national bank to pay off state Revolutionary War debts, and in exchange got the U.S. capital moved from New York to the banks of the Potomac at the Virginia border (after a temporary stay in Philadelphia).

Other first friendships began long before political careers were established. The bashful Nathaniel Hawthorne, from Salem, Mass., had admired and befriended the bolder, more gregarious Franklin Pierce of Hillsborough, Me., on a stagecoach to Maine's Bowdoin College.

After graduation, Pierce's advancing political career enabled him to arrange a government job for Hawthorne, whose literary success had not provided much income. And Hawthorne eventually returned the favor as he once imagined ("to exercise my pen in your behalf") by writing a best-selling Pierce biography for the 1852 presidential campaign that lyrically portrayed their shared view that Southern slavery must be accepted so the Union could endure, "one of those evils which divine providence . . . in its own good time . . . causes to vanish like a dream" (as a more recent president once promised of the Covid pandemic).

Victorious, Pierce rewarded Hawthorne with the post of U.S. consul in Liverpool, but the compromise with slavery could not stand against rising Northern abolitionism as civil war drew ever closer. Pierce was not even nominated for re-election, and Hawthorne was disdained by peers including Thoreau, Emerson, and Longfellow. "My friends have dropped off from me like autumn leaves," he lamented.

The only first friend left more disheartened was the one most determined to latch on to a likely chief executive whose power he could manipulate behind the scenes. Edward Mandell House was dubbed "Colonel," despite no iota of military experience, by the governor of Texas, where House built a formidable business and political empire. In 1911, now moved to New York, he watched the ascent of dour Woodrow Wilson from president of Princeton to governor of New Jersey to would-be presidential candidate who felt he needed someone to reassure and guide him.

It was a wondrous match as House, with no official title or government experience, became Wilson's primary domestic policy aide, personnel director, international analyst, and negotiator. It came apart when Wilson's second wife began to block House's overreaching and when the peace treaty to end World War I, for which House took unusual public credit, proved so demeaning to defeated Germany that it could be seen paving the way for World War II. When Wilson died in 1924, House was not even invited to the funeral services.

Young John Kennedy had the wherewithal to observe foreign affairs on personal travels across Europe and when his father was ensconced at the ambassador's residence in London. And it was there he may have met David Ormsby-Gore (or at Epsom Downs, or "over supine bodies in a squalid basement bottle-party," according to the novelist Evelyn Waugh).

Kennedy and the son of Britain's seventh-generation Lord Harlech enjoyed golf, girls, gossip, and, as scions of power and privilege, discussions about true leadership in a democracy. Twenty-five years later it was Ormsby-Gore, then Britain's ambassador to Washington and a frequent social companion, who Kennedy as president summoned to "come unseen" to the White House and advise on the still-secret Cuban Missile Crisis.

Together they avoided the most provocative response proposed by J.F.K.'s National Security Council. And drawing on the Brit's three years of experience negotiating with the Soviets, they gave Moscow time to reconsider, recall offensive weapons 90 miles offshore — and avoid nuclear war. Later Ormsby-Gore would be a more frequent White House presence than any Cabinet member or official adviser, still a pal and now a powerful influence as President Kennedy moved from campaign rhetoric about a fictional "missile gap" to sincere efforts toward atomic test bans and arms reduction.

Far less high-toned was the friendship of Harry S. Truman and Eddie Jacobson, who met as teenagers in Kansas City, both kept from college by the need to help support their families, both later finding themselves in the same World War I artillery unit. As a team they made their base canteen a profit center, which led to partnership in a postwar haberdashery.

Regular get-togethers, lunches, and poker kept them in touch as Truman advanced in machine-backed local politics, then to the Senate, then as F.D.R.'s fourth-term running mate.

No favors for Jacobson were asked from or given by Truman as he inherited and undertook unprecedented challenges in the wake of Roosevelt's death — first use of the atom bomb, pleas for reconstruction aid by former friend and foe nations alike. But then came the proposed partition of Palestine to create an Arab state and Israel.

The Baptist, Bible-reading Truman, despite occasional anti-Semitic expressions in private, had previously supported the partition, but faced both redundant pressure from wealthy, powerful American Jews, and increasing counter-pressure from his State and Defense Departments, warning that it might bring the Arab world closer to Moscow and threaten America's Mideast oil supply.

The Jewish Jacobson personally urged his former partner — once even without a White House appointment — to meet with the ailing Zionist leader Chaim Weizmann. After long silences on both sides, Truman caved: "You win, you bald-headed son of a bitch. I will see him." After which Truman made sure his government would be first to recognize the Jewish state, with Jacobson later downplaying his "small part in this historic event," and Truman calling it "of decisive importance."

First friend, indeed, to his president and his people, though the challenge there persists.

Gary Ginsberg has a house in East Hampton.

David M. Alpern ran the "Newsweek on Air" and "For Your Ears Only" radio programs for more than 30 years and now moderates presentations for the libraries in Southampton and Sag Harbor, where he lives.