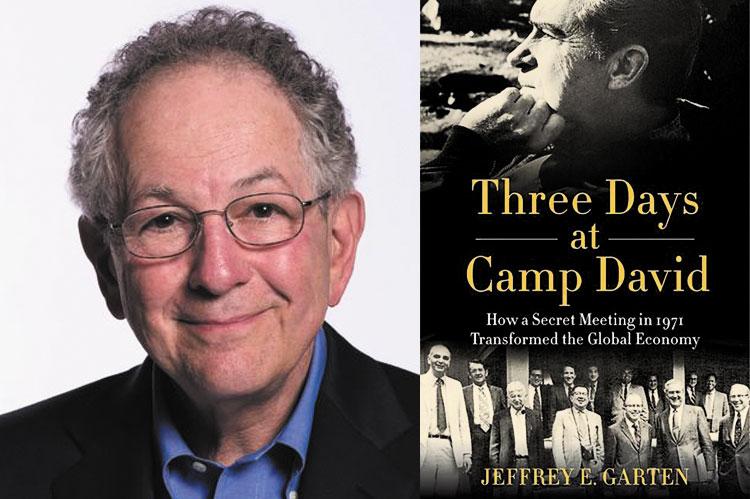 "Having behind us the commercial interests and the laboring interests and all the toiling masses, we shall answer their demands for a gold standard by saying to them, you shall not press down upon the brow of labor this crown of thorns. You shall not crucify mankind upon a cross of gold."

William Jennings Bryan is not listed in the index, nor is the most famous line of his most famous speech, in July of 1896. But both echoed in memory while reading Jeffrey Garten's "Three Days at Camp David: How a Secret Meeting in 1971 Transformed the Global Economy."

Because the global economic transformation of which he writes was nothing less than the decision reached by then-President Richard Nixon and his top economic advisers to take the U.S. dollar off its historic gold standard ($35 per ounce), hauling the rest of the world's major currencies with it, and to hell with the previously sacrosanct international financial agreements of Bretton Woods in 1944.

Among the prestigious campers at the Catoctin Mountain presidential retreat were: Federal Reserve Chairman Arthur Burns, whom Nixon most wanted to persuade; Treasury Secretary John Connally, a skillful pol but with no international finance background; Paul McCracken, chairman of the Council of Economic Advisers; Office of Management and Budget Director George Shultz; Herbert Stein, member and later chairman of the C.E.A., and Paul Volcker, the towering undersecretary of the Treasury for monetary affairs and the man most steeped in the details.

To Mr. Garten, an economist and Wall Street veteran who knew many of those involved — having served in the Nixon, Ford, Carter, and Clinton administrations, also as professor and dean at the Yale School of Management — that weekend of August 13, 14, and 15 was "a watershed in modern American history" and an indication of "changing American power and influence . . . forcing the rest of the world to adjust to the impact of its disruptive action."

In fact, it seems at least as much the American reaction forced by a changing world. The starting point was that Washington simply did not have enough gold reserves to cover all the dollars being held overseas as a result of booming world trade and development. A sudden demand for the collateral could have been disastrous.

What followed is amazingly complex proof that necessity can be the mother of invention — but also intervention, pretension, presumption, exaggeration, prevarication, and, ultimately, frustration.

Nixon being Nixon, and the U.S. economy then in sad shape as his re-election challenge approached, the president wanted an even bigger surprise package, including some elements he and his party had long promised to avoid — the economic equivalent of his dramatic opening to China — to make sure "Nixon's the One" again in 1972.

Also, there was hope to trim ballooning military expenses by prompting (threatening) major allies to share more of the burden. (Where have we heard that of late?) Not surprisingly, many of those allies were infuriated by the lack of warning as well as by all the disadvantageous details.

But domestic reaction was "wildly supportive," Mr. Garten notes. Immediately after Nixon announced his "New Economic Policy," the stock market had the largest one-day jump in its history, a 3-percent gain of 32 points. "I've never seen anything this unanimous unless maybe it was the reaction to Pearl Harbor," said the pollster Albert Sindlinger.

Mr. Garten interviewed scores of participants and other experts (with numerous citations from the late columnist/historian Richard Reeves, a former Sag Harbor resident) for ultra-detailed reconstructions of the weekend sessions: conflicting views on precisely how tough various policies should be, how long they should last, what impact they might have.

After the camp and Nixon's announcement came top-level head-banging overseas to bring foreign leaders on board (at least temporarily), and follow-up sessions such as the meeting of major power finance ministers (then G-10) and central bankers at the imposing Smithsonian Institution, "as close as the United States had to a genuine castle."

After which, Volcker conceded to a colleague: "I hope it lasts six months."

And finally, on page 296, Mr. Garten informs (or reminds) us that "pessimism was justified, for the agreement would soon fall apart" — leaving the free market, national interests, and the International Monetary Fund to manage currency and trade as best they could. A watershed run dry?

Actually, there were problems from the start. Neither Nixon nor Secretary of State Henry Kissinger "was comfortable with international economic policy," the author concedes. "They both had almost no knowledge of international monetary arrangements."

Nixon by nature was primarily interested in domestic presentation of the package and its political impact. And Connally, as chief spokesman and arm-twister for the shakeup, was naturally suited to make that his top priority as well.

They both were willing to accept partial victories vaguely defined or left for yet more negotiation so that Nixon could seem strong in pre-election visits to China and the Soviet Union — for the additional campaign boost both would provide.

Looking back at the Camp David weekend, Mr. Garten acknowledges that wage and price controls were "a major mistake," spawning just the unwieldy bureaucracy Nixon promised to avoid. And after they were removed came years of the very inflation he feared because of all the pent-up pressures.

Mr. Garten also thinks Nixon acted too unilaterally in a new interdependent world where once economically ravaged friends and foes alike (think Germany and Japan) had become, with American help, powerful interests to be respected and reckoned with.

But a bull-in-the-china-shop approach was necessary, he insists: "There was no effective way to start a multi-lateral negotiation without Washington's administering a shock in advance."

Putting the pieces back together in a better way was clearly more complicated than the Camp David crew presumed. But Mr. Garten argues that the effort, for all its faults, at least dramatized the complexity of the new multi-polar world, shattering traditions, policies, and institutions that were just as clearly out of date. And it kept America involved.

Suggesting that the Covid pandemic may well leave lingering damage to domestic economies, world finance, and trade, Mr. Garten writes: "The big question now is whether the Biden administration can use the 'Trump shocks' — the defiant unilateralism; the withdrawal from international agreements on climate change, and from international institutions such as the World Health Organization; and the rampant use of tariffs and economic sanctions, all of which certainly caused deep concerns among America's allies — to re-engage them in serious negotiations about rebuilding a new cooperative world order appropriate to the new challenges ahead."

Best that the planning get more than three days.

David M. Alpern ran the "Newsweek on Air" and "For Your Ears Only" radio programs for more than 30 years and now moderates presentations for the libraries in Southampton and Sag Harbor, where he lives.