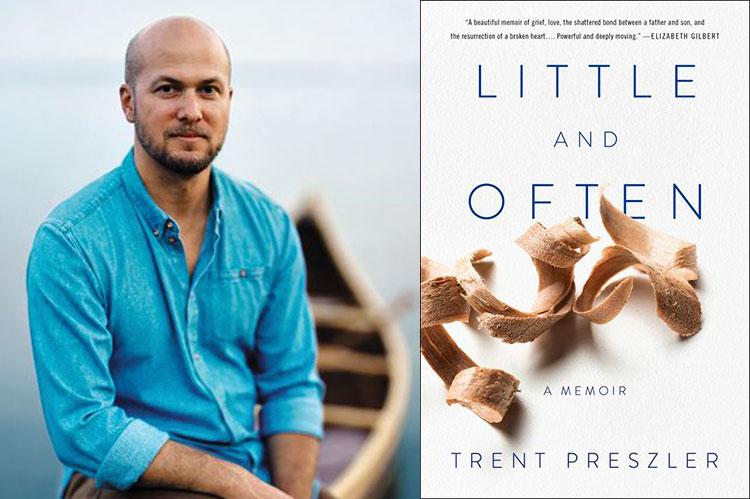 Most fathers and sons will relate on some level to this wonderful memoir. And even the most experienced boatbuilders and woodworkers will be impressed.

After reading the synopsis I was poised not to like this book and went into it with pursed lips, like a baby being fed castor oil.

It's a good story, but told before.

You could almost see the publisher foaming at the mouth on this one. After all, the formula works. There's money to be made in horrific childhoods. Just look at Tara Westover's best-selling "Educated." Why not take a shot, as long as the guy has some writing ability? My point is, you're not going to come close to topping "Educated," so why try?

And while the subplot/narrative device about a guy building a canoe for 150 pages, and the details of the world of woodworking, did interest me, I was suspicious about how entertaining it would be.

I was wrong on all counts, and humbled and delighted by every word.

Five pages in, I became well aware that I was the hands of a masterful writer. This is Pulitzer-quality stuff, with the poignancy and heartbreak of "Brokeback Mountain."

Trent Preszler describes growing up on a farm in South Dakota, where the nearest McDonald's was over 100 miles away, eloquently and without judgment. You come to understand the work it took to keep a vital farm functioning. It was a good life, before the times of government subsidies, uni-crops, and pesticides leading to mutant crops. Farmers cared and had pride — a time, well, dare I say it, when America was great? Can I say that?

Trent's father was a good man, if a man of very few words. He communicated through accomplishments, and they were many. He was a titan, a multitalented rural legend — a successful farmer, woodworker, fully capable of building and mending fences, and houses, and duck decoys, herding and raising cattle, a skilled craftsman and hunter. He was a provider.

On top of this, he was a champion rodeo rider! The guy could get on the most furious and brutal bull and whip and tame it into docile submission. How can any son, or really any man, live up to that? To put it in perspective, Dick Proenneke from that Alaska documentary on PBS, "Alone in the Wilderness," would probably feel inferior in front of Trent's father.

Tough shoes to fill. Maybe Trent was just a chromosome away from his father, but that was enough. He could never be his father, or anything that resembled him. It just was not in the cards.

This is a story of irreconcilable differences between a father and a son. A vast biological difference clearly existed between the two; their relationship was only to be reconciled postmortem through a bag of old inherited tools that Trent ultimately used to build his canoe.

The memoir is ripe with literary imagery, metaphor, pathos. Terrible things happened to the family, and then things got worse. You can't believe this guy survived the horrors. And in the end there is resolution and peace.

The author points out that tools have meaning and life; they are not just inanimate objects. Saws, brushes, hammers, scrapers are capable of communication if used correctly.

And there's the rub. It ain't easy using them. But once he masters the tools and learns to respect and work with wood, over an arduous year with huge setbacks (wood breaks, the wrong glue is used, etc., and the reader goes along with empathy) he achieves his goal: building a functioning Algonquin canoe. It's hard to believe that his father was not looking down on this and smiling. You really feel it.

There is proof that Trent's father had love for his son. He wanted to help him. As a kid Trent got a horrible summer job sanding down an old building. It was awful, laborious work. His hands were blistered and bleeding. When he said he wanted to quit, his father would not hear of it. He agreed it was a tough assignment for a kid, but he suggested that Trent focus on sanding one brick at a time, that was manageable; hence the title, "Little and Often."

Later in life, sadly after his father had died of brutal cancer, that mantra helped Trent build his canoe — a task that involved tedious labor consuming a whole year.

It should be noted that Trent did well on his own terms, before the canoe, graduating from Cornell University with a degree in horticulture and operating a successful North Fork vineyard. With the canoe, the vineyard, and this masterpiece of a book, one could argue that he far surpassed his father's accomplishments. It's not easy writing a book of this merit.

You're rooting for Trent the whole time to complete the canoe, and you applaud him when he finally reaches that sweet clearing in the woods and is indeed, we feel, reconciled with his father.

Jeff Nichols's first memoir was made into the Hollywood comedy "American Loser." His new book is "And Then They All Puked: Why I Should Never Have Been a Montauk Groupon Charter Boat Captain." He lives in Springs.