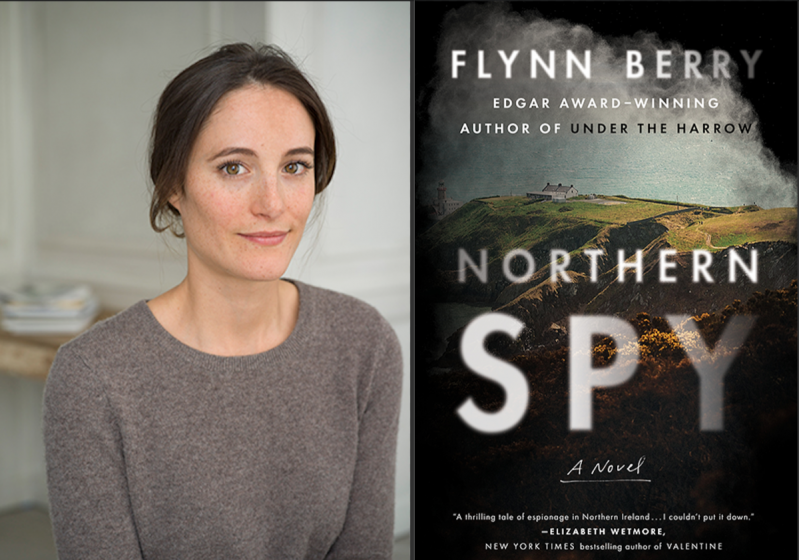 Who knew that a contemporary thriller about a single mother, her infant son, her sister, and the sisters' mam could illuminate so much about the inner workings of the Irish Republican Army and MI5? The I.R.A. has always seemed to me a baffling monolith — the randomness and the senselessness of the violence done by men, women, and children mystifying. Why did people continue in such a brutal fashion?

I was moved by "The Ferryman," Jez Butterworth's poignant play about the Troubles, on Broadway, but still I just didn't get it. Not until I read Flynn Berry's new thriller, "Northern Spy," did I finally grasp how women are recruited, how truly internecine the struggles between Northern Ireland and MI5 are, how devious these machinations continue to be.

What better opener for a thriller than the line "We are born with a startle reflex." Ms. Berry goes on to write, "Apparently it's caused by the sensation of falling. Sometimes, in his crib, my son will fling out his arms, and I hold my hand to his chest to reassure him."

"It happens less often now than in the first months. He doesn't constantly think the ground is falling away beneath him. I do, though. My startle reflex has never been so strong. Of course it is, everyone's is at the moment. That's part of living in Northern Ireland, at this point in time, during this phase of terrorism."

Tessa, a producer for the BBC in Belfast, and Marian, her E.M.T. sister, were children back when the Good Friday Agreement was reached in 1998. Despite the accord between the British and Irish governments as to how Northern Ireland should be governed, true peace was never realized.

Now two decades later, Northern Ireland continues to be the epicenter of horrific raids, bombings, and murders. A tinderbox, Ms. Berry writes. Bodies are still found in bogs. Over coffins men in ski masks fire guns — even though they claim they'd surrendered all their weapons.

"So it was never peace exactly," Ms. Berry writes from her character Tessa's point of view. "The basic argument of the Troubles hadn't been resolved: most Catholics still wanted a united Ireland, most Protestants wanted to remain part of the UK. The schools were still segregated. You still knew, in every town, which was the Catholic bakery, which was the Protestant taxi firm."

Driving along highways, Tessa sees splotchy, paint-drippy murals that read: "Brits out. Resistance is not terrorism. Join the IRA."

Each workday Tessa commutes from a small tranquil village into Belfast. Her job at the BBC is to cull through breaking national and international events, to meet with politicians who come to the station to be interviewed about dramatic news, as well as to parse what is true and what isn't.

And then one day police come to her saying that her sister has disappeared. Officers show Tessa a video of Marian donning a black ski mask. They ask Tessa whether Marian is a member of the I.R.A. No, she insists. Her sister is on holiday. There is no question — Tessa argues that Marian was abducted. And her subsequent search for her sister leads Tessa to re-examine everything she sees going on around her.

"I don't try to explain my sense that the IRA wants us to act in a certain way, and we have to do the opposite." Tessa's thoughts are resolute. "I'm so sick of having them decide how we will behave. They tell us when to be scared, when to be quiet. When Colette's cousin tried to leave her husband, an IRA representative came to her house and said, 'He's going crazy up in that prison. You can't be leaving him. It'd be bad for morale.' "

"If we refuse to play our parts, maybe this will be over sooner. Marian will come home."

The I.R.A. discovered one of Tessa's neighbors selling drugs. "They accused him, without any irony, of endangering the community." The mother was told to bring the boy for a "punishment beating, but they ended up kneecapping him." Tessa is incredulous that the mother brought the boy for a beating.

"Aye, but I didn't say they could shoot him," the mother tells Tessa.

During her quest to find her sister, Tessa's startle reflex is amplified. When she goes into a village shop to buy aspirin at one point in the narrative, there is a loud, earth-shattering shock. People are thrown to the ground and scuttle for safety. As it turns out, there was no bomb — just a truck accident.

The theme of the relationship between sisters is one Ms. Berry also explored to great effect in her Edgar Award-winning first novel, "Under the Harrow." In "Northern Spy" the sisters know each other so deeply. Or do they?

"Marian has wavy brown hair that she wears loose, or piled on top of her head with a gold clasp. We look similar — same eyes, and cheekbones, and dark hair — though Marian's is an inch shorter than mine and softer. Her natural expression, when she's not speaking, is open and amused, like she's waiting to hear the end of a joke, while mine tends to be more grave."

These similarities and differences in the two sisters are key to the thriller's remarkable oscillations. And Marian's gold hair clasp will pay off to Chekhovian perfection.

How beautifully Ms. Berry writes about Finn, Tessa's infant son, throughout this novel. Rarely is a baby such a central, completely realized figure. After his bath, Finn "howls at the cold air. Even once he's dry, he lets out a few last cries, like he wants to be sure his complaint has been lodged. . . . He maneuvers his arms out from the towel and reaches a hand toward my face. We consider each other. His skin is cool from the water, and he looks pensive in the dim room. His legs bicycle in anticipation as I lower him to my chest to nurse. . . . He has rosy feet and toes that appear double jointed, and dry creases at his wrists and ankles. . . . The lines on his palm have the exact same proportions as mine, and though I don't believe in palmistry, I am still glad he has a long life line."

The irony of that last line becomes palpable as the book progresses through the unpredictable fortunes of the Northern Irish, faced with life-and-death every moment.

Why, one might ask, does Ms. Berry spend so many pages of this gripping, spellbinding, unpredictable thriller on a baby? A missing sister? And even Tessa's mother, who loses her job because of innuendo? As the poet Seamus Heaney once observed, Ireland's landscape "remembered everything that happened in and to it." As do its people.

Because "Northern Spy" is a novel about what's truly at stake.

Free Car Seat Checks in Southampton
Battle of the Books, and More Fun for Teens
This Week's Happenings in Montauk
END_OF_DOCUMENT_TOKEN_TO_BE_REPLACED