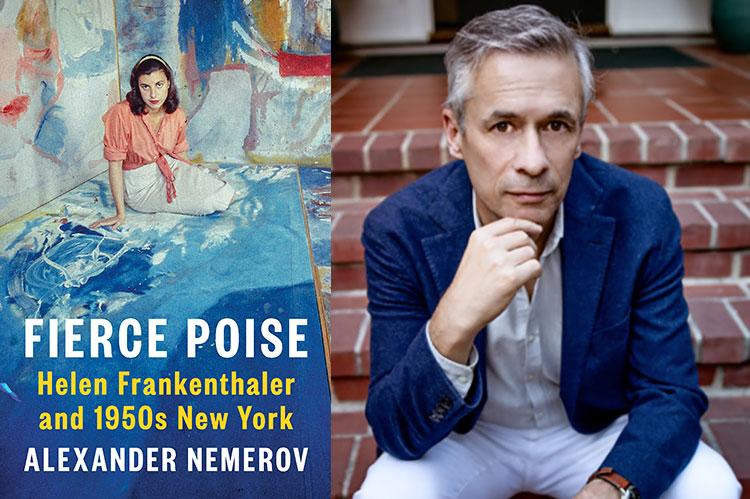 Alexander Nemerov's "Fierce Poise" is so many things at once, it's difficult to keep them all straight, particularly as you marvel at how well they all fall together to make a cohesive whole.

He captures the first decade of Helen Frankenthaler's career along with her personal life with both a fly-on-the-wall intimacy and a great understanding of her work and what made her tick. Is it a biography? Yes, but it also captures the cultural world in a key decade in New York City and with it a good many of the great artists, poets, curators, and critics of the time moving through the narrative.

Mr. Nemerov manages to give those personages a depth in their portrayal similar to Frankenthaler's treatment, all while devoting his fanboy erudition to his main subject. The son of the poet Howard Nemerov and the nephew of the photographer Diane Arbus, he is the department chair and a provisional professor of arts and humanities at Stanford University and puts all of his background to good use.

He takes a historian's approach to the period, tracing the time passed through letters, oral histories, contemporary interviews, and other sources. This is no mere rumination, although the quality of the writing would be enough to recommend that. Rather he has knitted together the fragments available, the thoughts of those who knew her when, and his own perceptions of the artist into a story told in key dates that signify weeks, months, or even years in her development.

As to the subject, he has some personal connection, enough to make him feel tied to her in some way. His father was one of her instructors at Bennington College in Vermont. He was born some 15 years after her graduation, but certain aspects of their lives overlapped.

He is clearly infatuated with his subject, a kind of art crush, but who can blame him? She rises from a charmed childhood that became marked by tragedy. Her father's doting and her sense of purpose would serve her well even after his untimely death. Her fear and loss in the aftermath gave way to an eventual understanding that she would emerge from her grief a much stronger person with a steely determination to succeed. This gave her a notable edge in a male-dominated field.

Mr. Nemerov's sympathy for her work was not immediate. It took years to develop after his coming of age academically in the 1980s, a different era with much different values. In the book's introduction, he recounts "my feelings for Helen's kind of grace were waiting for the moment when I could discover that joy was itself serious, that prettiness had its edges, and that guilt, anger, and indignation were not the only games in town." Having matured and had children, he found he could approach things like Renaissance painting, even teach them, without the skepticism that marked his earlier years, and that in turn "led me more directly to Helen's art."

From her early days making chalk marks on the apartment walls or mixing nail polish and water in the bathroom sink, she showed signs of an artistic temperament. As the author notes repeatedly, her Upper East Side background and continued personal wealth prevented the financial struggle that most artists of the period experienced. That she was attractive and charismatic did not hurt in finding influential champions of her work, like Clement Greenberg, her boyfriend in several years of this decade.

Still, Mr. Nemerov says, she needed "an extraordinary gift to make her way." Defining what set her apart, he says she took what was happening both internally and externally around her and brought "it out in sudden, momentary pulsations of color and shape and line. The result was paintings as surprising and glorious as life itself, paintings that enshrine the living feeling of days like no one else's do."

After graduating from college in 1949, she moved in with an aspiring actress, Gaby Rogers, and they proceeded to make their mark on the city. The book opens with their arrival at an artist's masked ball in May 1950. Dressed to impress, Frankenthaler went as Picasso's "Girl Before a Mirror" and Rogers as a cover girl for a fashion magazine. Their bright outlandish attire earned them the only color photo Life magazine ran of the event.

Her pursuit of media attention did not stop there. In that decade, she wound up being featured in Esquire and then Life again, much to her colleagues' chagrin. Just days before the party, she made the acquaintance of Greenberg, in a meet-cute "critic comes to gallery show and falls for the pretty curator after dissing her work" sort of way.

Having two decades on her, he wasn't a hit with her family, but, as many have noted, was attractive to her as a replacement for her father, along with the rest of the package he offered to an artist starting out and looking for a way in.

Taking up much of the first half of the book, their relationship broke up in 1955. That August, Frankenthaler rented the Springs house of Conrad Marca-Relli, with visits from a new boyfriend much closer to her age. The breakup caused Greenberg to have a nervous breakdown, and her new relationship didn't stick. She would continue to date men her age, but they never seemed to be on the same wavelength, perhaps a result of her "old soul" that the author references on several occasions.

Another connection to South Fork was her friendship with Jackson Pollock and the intense feeling she had for his work. It developed when she first saw his murals with Greenberg in 1950. It continued to affect her art and her feelings about measuring up as she came to know him as a frequent guest in Springs. Lee Krasner, who Frankenthaler helped console when they were both in Paris at the time of Pollock's death in 1956, was not the only artist liberated in her practice by his passing.

At the end of 1957, she met Robert Motherwell at a party. Although the end of the story is known going in, it feels hopeful and "happily ever after" at first. They were married by April of the following year and shared a proper artist's honeymoon, visiting sites in Spain and France that inspired their work in a rented villa with spaces for each of them to have a studio.

Back home in his townhouse on 94th Street, she developed maternal feelings — despite the selfishness she felt was required for her work — for his young daughters, who lived with them for two years while their biological mother suffered some setbacks.

It seemed as though each of their own psychological demons complemented each other, until they didn't. Early on, she said of the relationship: "Both Bob and I after years of loneliness and a gregariousness that's the result of loneliness find that two things interest us the most and make us feel and live the most: each other and work." By 1971, the marriage was over.

Frankenthaler finishes out the 1950s with a retrospective at the Jewish Museum. It's the perfect device to contemplate and compare all that she had created in this time. The author, who has analyzed her key paintings all along, has a last chance to appreciate them in full (and to offer a less generous view from a critic of the show) as we see her move on from this early period in her life.

Mashashimuet Park's History and Future
A Conference for Young People to Create Solutions
Get Outside, Get Moving
END_OF_DOCUMENT_TOKEN_TO_BE_REPLACED