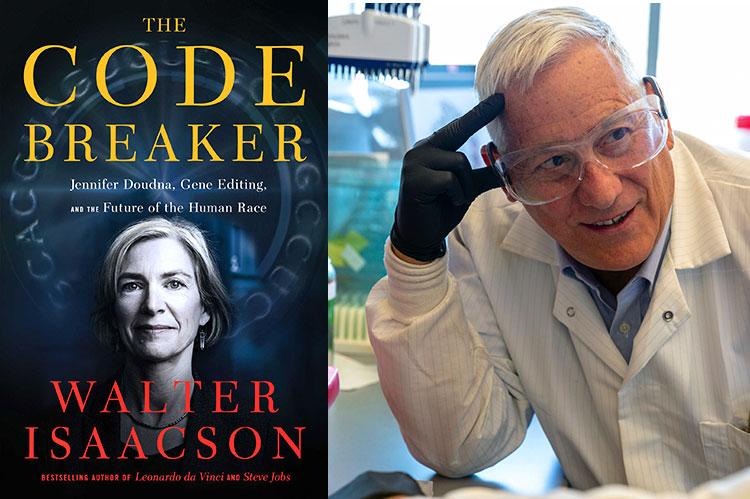 When Einstein was asked by an admiring reporter, "What is the greatest discovery of all time?" he is reputed to have answered, "Compound interest." Maybe this was intended to be a wise-guy answer by a genius to a serious question.

If I asked Walter Isaacson, the accomplished author of "The Code Breaker" and a man well acquainted with geniuses (Leonardo, Einstein, Jobs, and now Jennifer Doudna), the greatest discovery of all time, he might have answered, "A revolution in biochemistry capable of curing diseases, fending off viruses, and improving the human species itself."

His answer is important because Mr. Isaacson unveils, in clear, simple, factual, and fascinating detail, how Ms. Doudna, a research scientist, helped invent a tool called Crispr that can "edit" and alter our genes, so scientists can choose traits of "designer babies" and create immunity from the AIDS virus.

What's more, scientists can understand how to make Covid vaccines. For pandemic reading, this book is just what the doctor ordered.

"The Code Breaker" tells a great story about a great scientist engaged in a great race about a great — and maybe the greatest — discovery of all time.

Einstein said he was "not a genius." He insisted that he "merely" stayed with a problem longer than others. Ms. Doudna is another genius who would agree with Einstein about the impressive power of concentrated focus and continued attention to produce tangible scientific results.

Dave Barry once said that some people are very stupid: They think that a fax machine works by sending paper through the wires; he added that really smart people like him know that it's the ink that goes through the wires. Well, hello. Really sensible people (they call us "scientists") know the profound truth that it's actually the electrons in the wires that transmit the information.

Ms. Doudna knows more-profound truths, like how the RNA molecule, a cousin of DNA, "enables the genetic instructions coded in the DNA molecule to express themselves by directing the creation of protein for new cells."

Mr. Isaacson is impressive as well. When I reviewed his insightful book "The Innovators" in these pages on April 9, 2015, I quoted the poet Muriel Rukeyser: "The universe is made of stories, not of atoms."

I then went on to say that Mr. Isaacson offered readers "a splendid journey through time and space via personalities, facts, and ideas" in a book "rich in stories, both personal and historical, [and] easy-to-understand technical details at the intersection of the humanities and technology. . . ."

Not only would I say the same today about "The Code Breaker," I would add that Mr. Isaacson is a great storyteller and a national treasure — like Steve Jobs, Albert Einstein, and of course his latest subject, Jennifer Doudna.

When she was a sixth grader, her father left a book on her bed. It was James Watson's "The Double Helix," the story of how he and Francis Crick decoded the secrets of the "spiral-staircase molecule" DNA, the carrier of the genetic instruction code for all forms of life. "As she sped through the pages, she became enthralled by the race to put together clues" — as in a detective tale — "both in competition and cooperation with other scientists."

Her high school guidance counselor told her that girls did not become scientists. Her 2020 Nobel Prize in Chemistry, shared with her colleague Emmanuelle Charpentier, vindicated her determination to become a scientist nevertheless. (Listen up, girls: Don't let bad career advice turn you away from "following your bliss.")

Ms. Doudna utilized a gene-editing virus-fighting trick used by bacteria, evolved over three billion years, to remember and to assassinate killer viruses. When the pandemic hit, she and her colleagues turned on a dime to challenge the Covid virus. They enlisted what they had learned about genetic scissor-cutting and applied their new tools to develop new forms of Covid testing and treatments.

Moral issues surrounded her revelations about Crispr in 2012, a discovery that questioned whether creating "designer babies" is ethical. (These issues came up a while ago when medical tranquilizers were introduced: Is it "right" to use medicine to alter our "God-given" human personalities? The answer, in retrospect, seems to be yes, or maybe. As a beneficiary of trazodone, I have to say yes, but I'm guessing that some would not agree.)

In Greek mythology, Prometheus stole fire from the gods to bestow this gift upon humanity. Have Ms. Doudna and her colleagues stolen powerful secrets from bacteria to bestow upon 21st-century mortals value-free? Are there preferential rewards to the affluent from these powerful techniques? Are there racist implications? Stay tuned.

Or better yet, read Walter Isaacson's beguiling and ultra-timely "The Code Breakers."

Stephen Rosen, a physicist and regular Star contributor, is the author of a memoir, "Youth, Middle-Age, and You-Look-Great." He lives in East Hampton and Manhattan.

Walter Isaacson, a professor of history at Tulane University and former editor of Time magazine, has spent summers on the South Fork for many years.

Mashashimuet Park's History and Future
A Conference for Young People to Create Solutions
Get Outside, Get Moving
END_OF_DOCUMENT_TOKEN_TO_BE_REPLACED