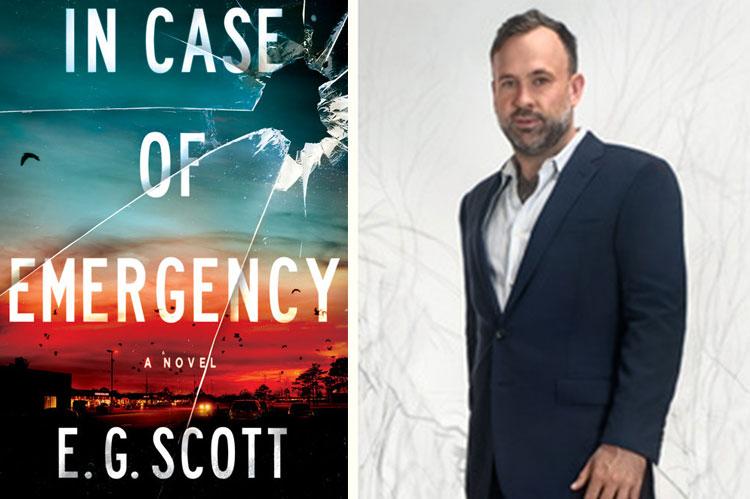 "This is going to end badly," someone says in the first sentence of the prologue to "In Case of Emergency" by E.G. Scott (the nom de plume for Elizabeth Keenan and Greg Wands). It is an operating room, and it is chaos. "She's coding!"

The novel is told in alternating first-person chapters by four characters: Wolcott, Silvestri, Rachel, and Charlotte. Wolcott and Silvestri are Stony Brook Police Department detectives and partners. After retrieving a large feline from a tree for an old cat lady (do detectives do that kind of work?), they are called to a nearby park where they find the body of a dead woman. Looks like she was jogging, and she smells of vomit. Could be natural causes, an asthma attack perhaps. She is in her 30s. She has a "card" and some cash.

Meanwhile, Charlotte is pining for Peter. He said he would be back this week, but she is running out of "positivity." As she approaches her office, she thinks she sees him, but though she calls out, he does not stop. She wants to follow him, but she is out of time.

My hand is steady and I am poised to strike. The sun through the window glints off the tip of the metal. Her blue eyes are wide with fear at the sharp point moving toward her chest. She swallows and looks away. In one quick move, I push the tip into her skin. She exhales sharply. I smile.

There are points on the outside of the human body where if you apply enough pressure, say with a sharp object, you can change an entire internal energy flow. You can turn someone into wet spaghetti or bring them to unconsciousness with the know-how. I pride myself on having mastered these vital points, outside and in.

Charlotte is an acupuncturist. She is working on Lucy, who suffers from "majorly low self-esteem," which, apparently, can manifest in a number of physical ways. As she works on Lucy she gets a call from the Suffolk County medical examiner's office saying that she is "listed as the emergency contact of an individual who has come into our custody," and she is needed to make an identification. In a panic,

Charlotte leaves Lucy lying on the table full of needles.

Turns out that the Jane Doe in the morgue is unknown to her but somehow had Charlotte's "contact info" in her pocket. The two detectives are suspicious. The M.E. says the victim "seems to have been poisoned." The poison is Atropa belladonna, a.k.a. deadly nightshade, "a highly toxic plant used for a variety of medicinal purposes."

As the novel progresses, we are given some fuzzy and nonchronological snapshots of Charlotte's troubled past. She had been a young and highly promising third-year resident in psychosurgery. She had been having an affair with her "rock star" medical supervisor, Dr. Henry Thornton. Together they performed some kind of experimental psychosurgery, and the patient, a young woman, died on the table. Shortly after, Charlotte was involuntarily admitted to a psych ward. When she got out, she decided never again to perform surgery, and trained to become an acupuncturist.

Charlotte has a partner in her office, an ex-heroin addict turned massage therapist named Rachel, who is also her best friend. Rachel once flatlined in the back of an ambulance and, we're told, "was dead for an hour and twenty minutes." I had no idea that was possible. Rachel is the only person in the world who knows about Peter, Charlotte's boyfriend, though she is not supposed to know anything because Peter has sworn Charlotte to secrecy.

"I knew the basics," Charlotte tells us, "that he was working for a sector of the government that required him to travel constantly. I guessed it was the FBI, but he made a comment once about the FBI being the 'Coast Guard' of government agencies."

Peter lives near Quantico, Va., and though Charlotte has offered to drive down there, he is embarrassed by his government-subsidized "pitiful bachelor's pad" and is concerned that it would be a bad idea for his "enemies" to even know she exists. Peter sends Charlotte flowers as code: "purple means he has to stay away longer . . . orange means that he's been compromised . . . baby's breath means he's safe."

The dead woman in the park turns out to be Brooke Harmon, the sister of the patient who died years ago during surgery by Charlotte and her lover, Henry. Next Charlotte's only friend, Rachel, is also killed, and now the police are really looking at her as a suspect. Despite a lack of any evidence that I could fathom, they arrest Charlotte for both crimes.

Eventually, Charlotte is released from custody, but later she is trapped in her office and bound helpless by the real killer, who is planning on killing her with "a stainless steel Walter Freeman orbitoclast." In classic Bond-type villainous style, the killer spends the next 12 pages getting closer and closer to killing Charlotte, all the while outlining to the hapless victim an account of not only past evil deeds, but also the motivations for them.

"Friends are vital to sanity, Charlotte," [the killer] asides creepily, and I get a wave of chills.

. . . "I wanted to get back at you in a way that could give me something to do. I needed a sense of purpose after everything in my life was burned to the ground by all of you. Once I started it all, it became a game. And it was too much fun not to stop."

In several different ways it turns out that Charlotte has been manipulated and deceived by nearly all the other characters in the book. This mirrors in many ways how we readers are also manipulated and deceived by the authors, particularly involving Peter. Often crucial information is actively withheld, things we are not allowed to know until the denouement. And as a reader you feel it.

I must admit that once the killer was revealed I felt I had been tricked, misled, and connived. Nevertheless, there is some nice writing in the book, and a good bit of humor, and I am sure "In Case of Emergency" will find its fans, as the authors' first novel seems to have been quite successful.

Michael Z. Jody, a regular book reviewer for The Star, is a psychoanalyst and couples counselor in East Hampton.

Mashashimuet Park's History and Future
A Conference for Young People to Create Solutions
Get Outside, Get Moving
END_OF_DOCUMENT_TOKEN_TO_BE_REPLACED