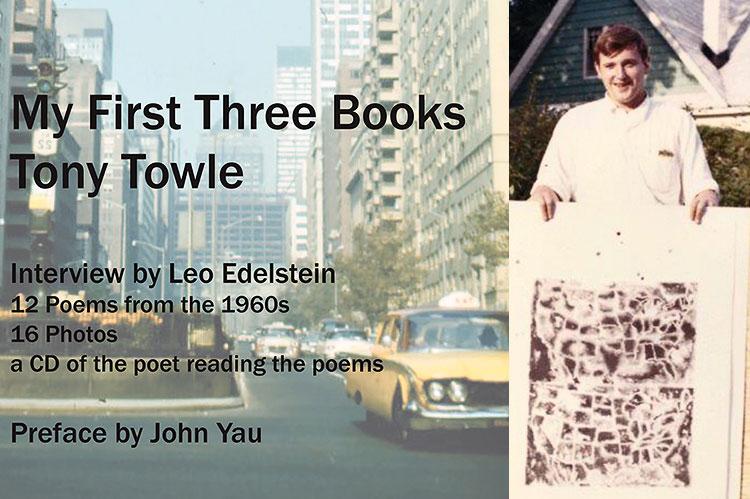 Knowing people is its own kind of art. The poet Tony Towle's acquaintances and friends make up a who's who of a midcentury cultural coterie — genius painters and brilliantly casual, elegant poets intimately connected in places like Manhattan's East Village and out east on Long Island: John Ashbery, Larry Rivers, Jasper Johns, Barnett Newman, Helen Frankenthaler, Robert Rauschenberg, Lee Bontecou, to name a few — coming together to make art. That synergy is the raison d'etre for a fresh look at his work, "My First Three Books," from Vehicle Editions and the publisher Annabel Lee, a poet and frequent visitor to Montauk.

Featuring 12 of Mr. Towle's poems, from "Poems" (1966), "After Dinner We Take a Drive Into the Night" (1968), and "North" (1970), winner of the Frank O'Hara Award, this gem of a volume, itself a work of art, with an interview by Leo Edelstein and a preface by John Yau, contains a multitude of photos, most black and white by Hans Namuth, plus a screen shot of Mr. Towle from Andy Warhol and a CD of the poet reading. Through this lens of a particular time and place in the 1960s, a world opens up as this slim book glimpses a specific historical moment, of a poet who not only met everyone, but facilitated and participated in unique opportunities for collaboration.

Tony Towle worked for 17 years as poet-secretary for Tatyana Grosman, founder of Universal Limited Art Editions. A refugee with a remarkable backstory in fleeing her privileged childhood in Russia and the Nazis' rise in Europe, she was dedicated to printmaking and to bringing writers and painters together. Frank O'Hara had suggested Mr. Towle for the job. A resident of Manhattan, he reverse-commuted to a six-room gardener's cottage in West Islip, where Tanya, as she was called, ended up after the death of her husband, Maurice. Sometimes Mr. Towle brought artists with him in limos Grosman hired. These rides could be fortuitous.

As he tells it in his 2018 interview with Mr. Edelstein, a resident of the U.K. and publisher of the journal Pataphysics, one March 26 morning he went to Jasper Johns's "bank" home in the former Provident Loan Society building at 225 East Houston Street to pick him up. Mr. Johns made his first lithograph in 1960 when Grosman brought stones to his studio. Enamored of the artist's work, Mr. Towle wanted to ask him to do a book cover for "North."

After a long pause, Mr. Johns agreed, "as long as you don't feel you have to accept what I do." Mr. Towle claims he is not quite certain that Mr. Johns even liked his poems. Mr. Edelstein inquires if Mr. Johns's art inspired him, and Mr. Towle reveals a connection to one lithograph for his poem "Autobiography," the source footnoted in an early draft and later deleted "to keep things enigmatic."

Tanya suggested that Hans Namuth take the author photo for "North," which he did, much to Mr. Towle's discomfort during the sitting and disappointment afterward, and James Schuyler wrote the jacket copy. A reader may find all of this minutia maddening, T.M.I., or be genuinely intrigued by how these choices are made.

In my case it is the latter. Accompanying the still from his "screen test," Mr. Towle provides insight into Warhol's process. Mr. Towle had not originally understood the project, learning later that the screen tests were to be included in a series, "The 13 Most Beautiful Boys," but that sort of marketing did not appeal to him.

The filming was his first trip to The Factory. Gerard Malanga — Mr. Towle knew him from the poetry world — had become Andy's assistant the previous year. He led him to a chair facing a camera with a tripod a few feet away. Andy appeared and asked him to look straight ahead and not move for the three minutes of filming (actually four and a half). Warhol turned on the camera and a bright light, suddenly blinding him. "It was a uniquely peculiar experience," Mr. Towle said. When they screened it for him, "I was surprised by how impressively hypnotic the technique was on the viewer: I was the subject of a fascinating portrait in time."

A longtime admirer of Vehicle Editions, I find the juxtapositions of artist with poet thrilling: Annabel Lee may have modeled herself after Tatyana Grosman, having made books over the decades with the next generation: Alex Katz, Christopher Knowles, Jayne Anne Phillips, Ted Berrigan, Joe Brainard, Barbara Guest, Richard Hell, and others. The Towle book is in many ways a tribute to Grosman. In a photo, one of the few in color, from an unknown source, dated July 6, 1972, she stands in Universal Limited Art Editions' front sitting room; behind her is Rauschenberg's "lithographic object" titled "Shades," from 1964, and on the wall is a unique working proof plus collage of Jim Dine's "Double Apple Palette With Gingham," from 1965.

About the choice to include color, Ms. Lee said, "That color portrait of her is mind-blowing — this little European lady comes from Russia on the boat and finds a stone in her yard and then voila, the basis for Alfred Barr's collection is expanded, and museums and galleries and a whole industry thrives as a result." (Barr was the first director of the Museum of Modern Art.)

Is that merely a publisher's extravagant claim, coming after a disappointment? The publication date of this book was March 26, the date of Mr. Towle's ride with Jasper Johns. "The virus hit and that was that," she said. "The hand of fate."

Last, Tony Towle's poems show what the interview and photos were a platform for, a deep dive into a poet's early work, and that goes for the CD of his reading them found in the volume's back pocket, too. His poems ground me, accompanied by his reassuring voice, profoundly resonant of our current state of being — distanced, yet with signs of hope.

From his prologue for "Enchantment": "If you walk slowly, out of breath, and think, / and breathe the air, on a coast, / arriving at the coast out of breath / and helpless, distressed about your conclusions / because it is evening and difficult to see, / then everything you sense may be enchanted, in a fugitive way, / as soon it will be a different situation."

Regina Weinreich is the author of "Kerouac's Spontaneous Poetics" and co-producer/director of "Paul Bowles: The Complete Outsider." She lives in Montauk and Manhattan.

A Conference for Young People to Create Solutions
Get Outside, Get Moving
Two Traditions, One Fair in Springs
END_OF_DOCUMENT_TOKEN_TO_BE_REPLACED