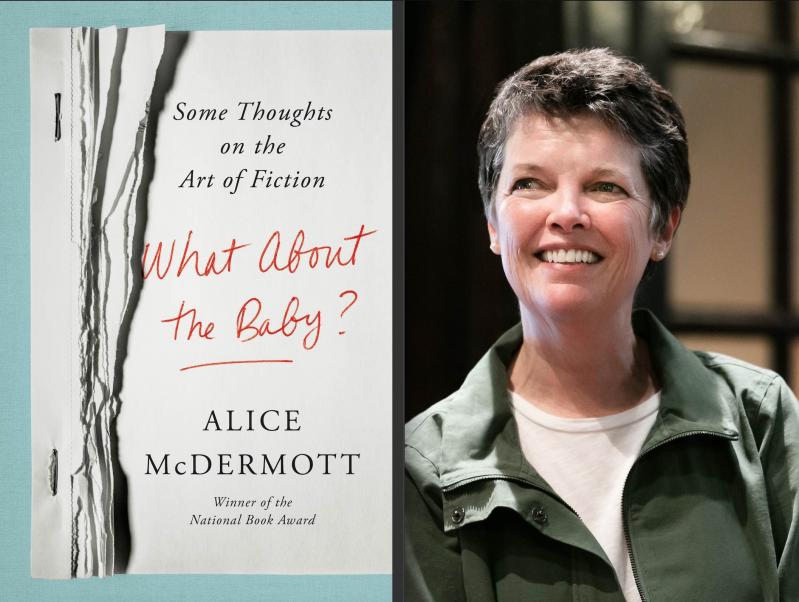 “What About the Baby?”
Alice McDermott
Farrar, Straus and Giroux, $27

Like all the best books ostensibly about writing and reading, the novelist Alice McDermott's "What About the Baby? Some Thoughts on the Art of Fiction" reminds us to attend. To notice the way words are strung together is to notice the nuances of communication, which is to notice the intricacies of human interaction, including what's between the lines.

In these 16 essays about writing, reading, and turning off Montauk Highway onto East Hampton's Main Street, Ms. McDermott illuminates everything from the shaping of sentences to the uses of enchantment between the covers of a book.

How literature can lead us to an awareness that is at once new and unearthed is a theme woven through the book. In the essay "Story," after quoting the haunting opening paragraphs of Charles Dickens's "Great Expectations," she reflects on Pip's whimsical description of the graves of his five little brothers.

"Inundated as we are by story — internet story and television story and gossip and horror and mass murder everywhere — it is this shimmer of magic that remains the province of the fiction writer alone. A magic that allows us to see, to recognize, what we have never seen before. To marvel at the familiarity of the conjured world even as we glimpse the never-before-seen enchantment of it all."

Although the essays in this book aren't formally connected, they are all suffused with Ms. McDermott's awe of the works she deploys to illustrate the craft, and with her deep humility. When the best-selling novelist brings up her own "process," it's to mention her bouts of uncertainty. She compares the shipwreck scene from "Robinson Crusoe" to what many writers undergo midway through the composition of a novel.

When I'm working as an editor even with best-selling authors, or with workshop students in their first confident blush of creation (before revision sets in), I notice the self-doubt that regularly assails a writer. Once you know you have company, it's easier to ride it out.

It's partly for this reason that I often recommend Elizabeth George's "Write Away: One Novelist's Approach to Fiction and the Writing Life," in which the mystery writer begins her chapters with entries from the journal she keeps during the creation of each novel. "I am filled with doubts. Why isn't Steinbeck filled with doubts?" she agonizes in one. Or: "What am I doing pretending to be a writer?"

One can also find solace in the last chapter of Stephen King's "On Writing: A Memoir of the Craft," in which he chronicles the accident that left him crippled, and how he — an author who never spent more than three months on any of his novels — painstakingly got himself back to the page: "And the first five hundred words were uniquely terrifying — it was as if I'd never written anything before them in my life. . . . I stepped from one word to the next like a very old man finding his way across a stream on a zigzag of wet stones."

And how reassuring to hear that Ms. McDermott, the author of eight literary novels, a National Book Award winner no less, wrestles with doubt herself. In the essay "What About the Baby?" she narrates how an encounter with a fellow mother in an elementary school parking lot caused her to lose confidence in her novel-in-progress, though by now she had five under her belt.

Upon hearing Ms. McDermott was writing another novel, her friend laughed and asked:

"Is someone going to die in this one, too? All of your novels are about someone dying."

. . . If only the laity knew what tsunamis of doubt these casual criticisms can set off in the still waters of our very shallow confidence.

Driving home to begin my writing day, I resolved never again to write about death. Never. From now on, no one dies. I resolved, in fact, to restore life to one of the characters in my half-completed novel, who, until that moment, had seemed fated to die in Vietnam. . . . Walking into the house, I was determined to bring the poor kid home alive, maybe even make the ending funny and shock the hell out of all those sarcastic readers who expect my books to be all Irish and mournful all the time. . . .

My desk on that day, by the time I got to it, was not only covered with bills, student manuscripts . . . but also an entire sorority of mothers from the carpool line rolling their eyes and asking, "Death again?"

I was, as you can imagine, a long while clearing them all out. But once I had done so, I saw that what I had before me was a novel that opened with a family . . . bound for sorrow. The story demanded it. The characters demanded it.

"What About the Baby?" gathers a series of craft talks Ms. McDermott, a longtime teacher of writing, gave at the Writing Seminars at Johns Hopkins and the Sewanee Writers' Conference, among other convocations.

Although I've taught writing for almost 30 years, I'm a fan of the D.I.Y. graduate program. Find or found a local workshop — the one taught by Marijane Meaker in the attic of Ashawagh Hall in the '80s was better than any I took in the M.F.A. program at Columbia. And then use "What About the Baby?" as the basis of your syllabus, perhaps supplemented by George Saunders's equally brilliant yet user-friendly "A Swim in a Pond in the Rain: In Which Four Russians Give a Master Class on Writing, Reading, and Life." In one of the most reassuring takes on reading what are to me often opaque Russian short stories, he asserts: "Criticism is not some inscrutable, mysterious process. It's just a matter of: (1) noticing ourselves responding to a work of art, moment by moment, and (2) getting better at articulating that response."

The works that Ms. McDermott analyzes can make up the D.I.Y. reading list, and the writing exercises derive from her technical advice. In the essay "Story," she reflects on what makes the components of story compelling. And in "Sentencing," she looks even more granularly into "that elemental collection of words."

And lest you're not a fiction writer and are tempted to skip this inside-baseball commentary, there is much philosophy of daily life here. Her warning against the use of the "would" conjugation, for instance, can be read as a reminder to experience life in the now:

"Remember, too, that the would always verb form carries with it a certain removal from experience as it is lived, and so, if not used judiciously, it can dilute the readers' experience. None of us, when you think about it, lives in the would always; we can only see it at a distance."

Some books on writing and reading assume a familiarity with the texts used as illustration. Ms. McDermott includes the relevant passages — in one case, a full Mark Helprin story — perhaps a result of her own experience in a Shakespeare class at SUNY Oswego in which the professor presumptuously announced to a room of newly arrived undergraduates, " 'We're going to reread the Henry plays.' "

Another humanitarian aspect of Ms. McDermott's approach to literature is the way she frames the broader purpose of fiction, including what she calls a novel's "moral vision."

Consider "The Great Gatsby"'s famous ending, "And so we beat on, boats against the current, borne back ceaselessly into the past."

And so he beat on, a boat against the current, borne back ceaselessly to his boyhood in St. Paul.

And, comfortingly, she warns against strenuous efforts to make each sentence a work of art:

"If you find yourself struggling with transitions between soaring lyricism and sentences that get your character's shoelaces tied, if you find yourself writing sentence after sentence that can only be followed by the sacred hush of a space break . . . then perhaps your sentences are trying too hard to be beautiful."

A bonus for South Fork readers is Ms. McDermott's reflection of East Hampton, a place she's visited since childhood — and a setting in her novels "Charming Billy" and "Child of My Heart." In the essay "Things," about the meaningfulness of objects writers chose to put into their novels, East Hampton in Ms. McDermott's hands is layered with history and personal significance. She opens the essay by capturing that turn onto Main Street (and, like Dickens, conjuring a magical vision of a graveyard):

The intersection of Route 27 and Main Street in East Hampton, New York, has enchanted me since I was a child. There is the postcard loveliness of it: the town pond reflecting reeds and sky, the swans, the worn cemetery stones set in lush grass. Every summer of my childhood I felt that catch-your-breath thrill at the unchanging sight of it as my father drove us through the town for our two-week vacation in what we always called "the country," never "the Hamptons."

The sensation caught me again that day in late June when my husband and I returned to East Hampton after a ten-year hiatus. . . . Passing the Home Sweet Home museum, a preserved cedar cottage from the 1700s, I recalled summer "educational" visits there and a fascination I'd had as a child with an antique checker set that was always on display — the checkers brown or yellow corn kernels, the board set up to suggest that a game was already underway, that the children who played it had only briefly, recently, stepped away.

In her essays, Ms. McDermott helps us understand the act of writing to preserve, of reading to remember. Like players in an eternal corn-kernel checker game, the back and forth between writer and reader allows us to see our world anew as it's refracted through the writer's imagination.

Alexandra Shelley is an independent book editor and professor of fiction writing at the New School. She spends summers in Sag Harbor.