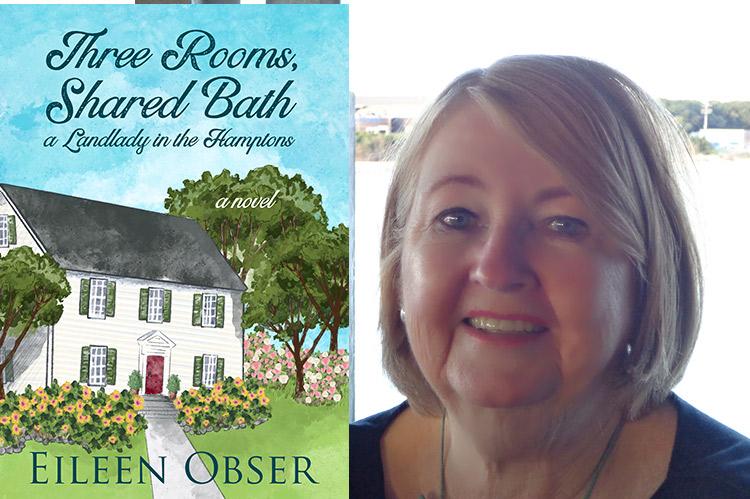 Anyone who has rented out a room, in the Hamptons or Toledo, Ohio, for that matter, will identify with much of "Three Rooms, Shared Bath," Eileen Obser's new novel.

This is a light, breezy book, a mere 151 pages, with a gorgeous cover representing a typical East Hampton house and accompanying flora. The chapter headings are entertaining and germane to tenant protocol.

This is the second book by Ms. Obser, an East Hamptoner. Her first, "Only You," was a memoir, and I'm not sure this one isn't also nonfiction, other than an obligatory love interest apparently shoehorned in to create a necessary narrative arc and tension (will she get the guy at the end?). It keeps this from being just a collection of humorous stories about bad tenants.

Ms. Obser is clearly an authority on her subjects: A) renting rooms, and B) East Hampton. The characters are so well drawn and believable, it's hard to imagine that they're not based on real people. But, in the end, who cares? The tenants (all young, self-absorbed, inconsiderate, conniving, and broke) and their interactions with the "landlady," Diana, are priceless.

When I buy a book or go to a sporting event or concert, I want brilliance. I want to see, well . . . what I can't do. For instance, in the first 30 or so pages of Dave Eggers's "A Heartbreaking Work of Staggering Genius," you realize you're in the hands of a professional writer, a master. Likewise, David Sedaris has a story in which he tells how as a kid he was addicted to licking doorknobs and light switches — you're captivated within seconds.

Here, there are very few, if any, metaphors or similes or descriptive adjectives. Aside from perfect grammar, which can be tough to come by nowadays, Ms. Obser has two strengths that distinguish her. One is her ability to craft seamless, engaging dialogue. Whether it is a gift or a cultivated craft, it's there. When Diana is arguing/talking/negotiating/pleading with her tenants to follow basic rules, the words fly off the page like in a Noel Coward play. And that's what keeps the pages turning.

The other strength is her love of the simple beauty of the landscape, which (and please allow me to fall back on cliché) is contagious. Gratitude radiates throughout this little book.

Diana (I surmise she is in her mid-50s) makes an effort to be happy; she chooses it. And mind you, there is plenty to be sad and angry about. Losing her husband and life partner to an awful bout of pancreatic cancer, for one. She has kids, but they live far away in California. Nonetheless, she remains defiantly positive. Whether it be on a simple stroll down Newtown Lane with an old friend, or enjoying dessert at Cittanuova or a trip to Maidstone Beach, Diana takes time to appreciate it all and often pronounces her gratitude at being alive in the Hamptons.

Ms. Obser takes us back to a quieter East Hampton. Remember the swarms of monarch butterflies at Maidstone Beach? They would engulf you as you rode a bike, but not so much anymore. That's what it's like.

The book takes place in the summer of the 2008 Democratic National Convention, which, with the election, is a recurring theme. It anchors the story in time, but every time the book departed from the tension in the house, my interest waned.

Diana knows tenants. She is on to their whims and tricks, and it's all covered here — not doing dishes, removing other tenants' damp clothes from the dryer and putting then on the floor, inexplicably turning off dehumidifiers, leaving horrible rotten stuff in the fridge, not cleaning the fridge, not cleaning at all, bad parking, tenants failing to come up with a deposit or refusing to move out, lovers disregarding the one-person-per-room policy or the policy about no loud noises or music after 11 p.m. (Maybe that one should have been simply no fornication.)

The book does have some drawbacks. Some of it reads as too mundane. There is one paragraph about Diana making a ham, tomato, and cheese sandwich that is simply unnecessary, as unnecessary as someone taking a picture of her food and posting it on Facebook. And Diana's close friend, the sarcastic journalist, is a bit of a bore, but he does serve a purpose in exploring Diana's conundrums.

He suggests she stop renting entirely, and that might not be a bad idea. (I used to rent out rooms to kids when I had a rent-controlled apartment on Park Avenue. Eventually I got rid of all tenants and began boarding dogs instead. I had a business card made up: "You might never live on Park Avenue, but your dog can.")

Another drawback, but far from a deal-breaker, is that the book is not contemporary. Granted, it's a time piece set on the eve of Obama's election, but the subject, room rentals, is very current. In fact, with Covid, rent waivers and rent deferrals, holdovers and squatters' rights have become buzzwords even in the tony Hamptons. Don't look for any of that here.

The Airbnb genre is a crowded one. Stephen McCauley recently broke ground with "My Ex-Life," a novel about a woman who, after breaking up with her second husband, begins to rent out rooms in her beloved, quaint home. Not only does she lose privacy, as she's forced to deal with countless emails and texts from customers, she all the while absorbs the full wrath of the locals, who accuse her of ruining the hotel business and just about everything else in town.

Point is, the publisher, Sunbury Press of Mechanicsburg, Pa., had the nerve to enter into this genre, and I'm happy to report that "Three Rooms, Shared Bath" holds its own with the best of them.

Jeff Nichols's latest book is "And Then They All Puked: Why I Should Never Have Been a Montauk Groupon Charter Boat Captain." He lives in Springs.