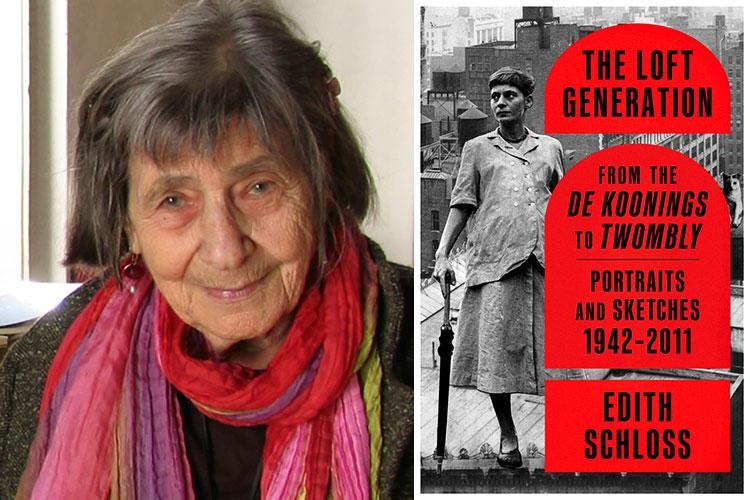 According to her son, Edith Schloss could not decide if she was "a painter who writes or a writer who paints." If her memoir proves anything, it's that Schloss painted even as she wrote.

In "The Loft Generation: From the de Koonings to Twombly, Portraits and Sketches, 1942-2011," the New York City of the Abstract Expressionist era explodes into a series of vivid canvases. Each paragraph offers a colorful phrase or observation that captures the moment. In her always entertaining stories, Schloss conjures up its iconic artists, composers, and poets while chiseling their legends down to human scale.

Who was Edith Schloss? By her own account, she was "an art student in a red hat," both stunned when she was taken seriously and occasionally confident that her work was worthy of it. Born in Offenbach, Germany, in 1919, to a "bourgeois Jewish family," she learned French at boarding schools in France, where she was sent as a child, and "proper English" in London; a command of languages was "a great asset for a girl," according to her father. After a stint in Italy and later Holland, Schloss faked a letter of invitation to England, which the authorities required on the eve of World War II. During the Blitz, she managed to catch a convoy to eventual safety in the U.S. She was barely into her 20s at the time.

Between 1942 and 1946, Schloss studied at the Art Students League in New York, where she learned to trust her instincts in art and began, like many others, to disdain figurative painting. Through a friend, she was invited to dinner at a farmhouse in New Jersey with refugees and artists who shared her left-wing political sympathies, Fairfield Porter among them. Schloss noticed a little abstraction on the wall: "It was green and gray and black . . . there was something still and clear about the little thing."

It had the effect of an epiphany. A few days later, she and Porter climbed steep wooden stairs and knocked on a small studio door of the painting's creator. A nonplussed Willem de Kooning finally emerged, "a man who had been measuring himself against the gods," wrote Schloss, "with nothing but a stick covered with paint in his hands."

Thus was launched Schloss's journey as a kind of Zelig of Abstract Expressionism, although her own career of group and solo shows in New York and Rome was not insubstantial. She married the photographer/filmmaker Rudy Burckhardt, a fellow emigre. Much like the artist/critics Elaine de Kooning and Fairfield Porter, she wrote for ARTnews, an important arbiter of taste then as now.

As a mere painter, she didn't qualify as a "working woman," and the gig allowed her to enroll her son in Hudson Guild's nursery school — plus, she warmed to the power of passing judgment. "Keep it short," Tom Hess, the ARTnews editor, advised. "Tell it the way you would to a person sitting next to you at dinner" — and this tone is exactly how "The Loft Generation" creates such intimacy.

Several editors, including her son, Jacob Burckhardt, assembled this memoir from an early rough draft, as well as pieces — published, unpublished, and some unfinished — that Schloss left behind at her death in 2011. The portraits and sketches unfold chiefly in New York, moving back and forth in time, and also in Italy, where Schloss lived for more than 50 years, first with Rudy, as well as after they parted and she took up with Alvin Curran, a jazz musician.

However, it's the New York of her reckoning, with its delightful side trips to New England watering holes, that bristles with energy. Like Schloss herself, the Italian years seem a little forlorn. "We took long walks," she wrote of an early visit from her friends, "but we weren't as cheerful as we were in Chelsea."

There have been many books — Mary Gabriel's excellent "Ninth Street Women" among them — that provide an insider's view of the Abstract Expressionists. "The Loft Generation," however, turns the reader into a co-conspirator. You are there at the Club, where the gang met on weekends and danced "the way painters did" with "all kinds of old-fashioned steps or inventing crazy new ones," bumping into things until they were black and blue the next morning — or at the Automat on 23rd Street, where Elaine de Kooning, "Queen of the Lofts," held sway with the men, sidelining the women.

Out of nowhere comes the dealer Leo Castelli, "the brilliant navigator," whose gallery openings were always "a gas." Incidentally, he created little white sheaths for the fire hydrants so as not to distract from the art displayed on the cool white walls. Inevitably, of course, there are the Chelsea lofts where artists worked and illegally lived, fending off rats, thieves, and extremes in temperature — spaces they ultimately made chic. It's no wonder that "75 percent of the best work exhibited in New York galleries," maintained Schloss, "was produced in the country in the summer."

Visits to Maine to see Fairfield Porter and his wife, the poet Anne Channing Porter, in their rambling summer home inspired Schloss's poetry. "The Korean War was only words," she wrote, "the mail boat came and went, bringing news, but there was no other world at that moment than this one, full of gamboling porpoises, spruce trees, and little wildly living things, pleasant walks, and swimming in the sea."

She had a gift for creating atmospheres of descriptive sound: a Chelsea night, for instance, in which an insomniac might catalog the "swish" of cars, the "clang of unbalanced manhole covers," the "shudder" of subway cars running under the avenues, and "sometimes in the small hours" the "clip-clop of a horse," like something out of a "fairytale."

Make no mistake, de Kooning was king. "Walking with de Kooning in downtown New York was like walking with Clark Gable in Hollywood," Schloss wrote. It's easy to summon up the man as she describes him: a boy from Rotterdam who had been "washed in all kinds of waters . . . small, dapper, and always attractive to women . . . a painter who could have been a plumber by the looks of him." Especially amusing were his Dutch-accented mispronunciations that caused momentary confusion: ting for thing, sinuses for scientists, jail for Yale University.

Notable in his absence was Jackson Pollock, except in the instance when he "sat glum, wrapped up in a stolid silence, hunched up and looking straight ahead." Others were summed up as neatly. The "grouchy suspiciousness" about the artist Joseph Cornell was "like that of a night animal reluctant to be with others in daylight." The choreographer Merce Cunningham was "a furry old faun or a stag weaving his midnight dance." Portraits of the poet Frank O'Hara, the dance critic Edwin Denby, the composer John Cage, and the artists Larry Rivers and Cy Twombly, among myriad other characters who populate these pages, are so fresh they are still wet on their metaphoric canvases.

"Paintings were just paintings by friends and no one thought of their monetary value," Schloss wrote. That some of those sketches and paintings, many casually tossed off, would end up displayed "like an altarpiece, enshrined and safe" in the Museum of Modern Art struck Schloss as a mystifying irony, one that she traded on herself in writing her memoirs. While she brought fresh candor to her subjects, Schloss held her own cards close to the vest. Who was Edith Schloss outside of art? What was the true nature of her intimate relationships?

Willem de Kooning (Springs) and Fairfield Porter (Southampton) are just two of the artists featured in "The Loft Generation" who lived on the South Fork.

Hoedown on the Farm, Cocktails in the Garden
Main Beach Free Concerts in Final Weeks
Services and Counseling After Death of Popular Teacher Assistant
END_OF_DOCUMENT_TOKEN_TO_BE_REPLACED