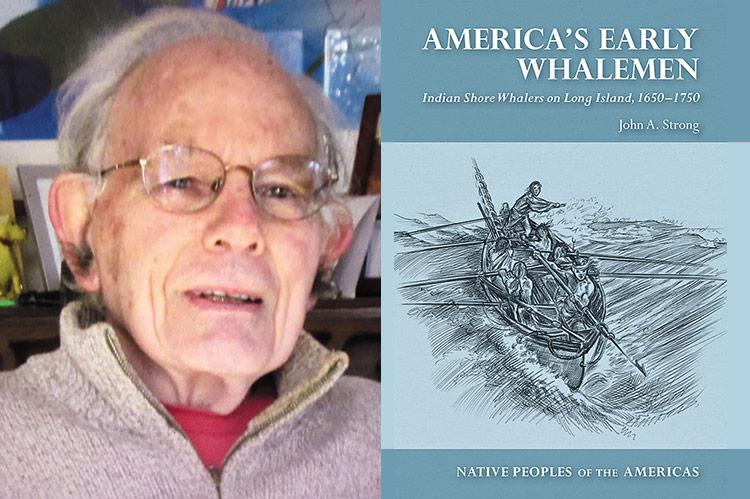 John A. Strong
By Richard Barons

While John Winthrop was aboard the Arabella, one of the 11 ships that left England in 1630 for the New World, he noted in his journal that he saw “mighty whales spewing up water like the smoke of a chimney . . . of such incredible bigness that I will never wonder that the body of Jonah could be in the belly of a whale.” He saw the whales’ presence as a hint of the natural riches awaiting his party of immigrants, who would soon found the Massachusetts Bay Colony.

By the time European explorers came upon the Americas, whale bone and oil had substantial value. And by that time, the native people had been hunting whales along the northern Pacific and the Bering Sea. Based on a contemporary account, Theodor de Bry illustrated an Indian whale-hunting party off the coast of Florida, and it was published in 1590. It is more than just conjecture that the native people of Long Island took part in the same tradition of shore whaling for some time before the settling of Southampton in 1640 and East Hampton in 1648.

After more than 50 years of teaching, researching, lecturing, and publishing, John A. Strong has written the book we have all been waiting for, “America’s Early Whalemen: Indian Shore Whalers on Long Island, 1650-1750.” It has often been assumed that the new English arrivals saw Indian whalers at work and adapted their techniques to establish a sporadic enterprise that soon blossomed into hiring native people for what was becoming a formal business. All this is true, but the scope of these mid-17th-century businesses has been underestimated by most historians. Indeed, the makeup of these small English family-owned concerns became the very diagram for drift, offshore, and the later deep-sea whaling companies. This book is a revelation.

Mr. Strong begins the story with an overview of European and precontact Indian whaling. He has filled his book with a wealth of primary sources, like the 1602 account by Capt. Bartholomew Gosnold (who named Cape Cod and Martha’s Vineyard). He watched a group of Maine Indian whalers in a Basque boat outfitted with a mast, copper kettle, and an iron grapple. Other accounts include descriptions of native people harpooning whales, towing them ashore, and then butchering them, also dating from 1602 and 1620.

The author quickly delves into the importance of the whale in Long Island native culture. In an archaeological dig in 1920 on Wright’s Island, near Throgs Neck, a stash of six whale tail vertebrae were uncovered. Mr. Strong notes that the bones had been secured and carefully placed together in a fashion that appears ritualistic. In David Lion Gardiner’s folkloric “Chronicles of East Hampton,” he references a “song of joy” following a successful Indian whale hunt. Gardiner describes a “great and prolonged pow-wow” that included vocalizing and dancing.

Such ceremonies probably celebrated the success of the hunt and were as well a way of thanking the gods so the next hunt would be equally successful. The size of the whales made them worthy of awe. Their tails and fins were often used as gifts or fashioned into elaborate belts.

The world of the South and North Forks’ native people changed forever with the permanent arrival of the English in 1639, when Lion Gardiner bought the island soon to bear his name. But nothing prepared them for the broken floodgate, when in the next year there were two sizable settlements on the East End, in Southold and Southampton. By 1645, a group of Southampton residents decamped farther east to found East Hampton. The rest of Mr. Strong’s book is a look at this clash of cultures.

From reading the town records of Southampton and East Hampton, the author agrees with the historian David Goddard, who realized that Southampton’s Puritan pioneers, led by Edward Howell, John Cooper Sr., Daniel How, and Thomas Halsey, were more interested in improving their economic status than in religious piety. There were disputes about ownership of drift whales, so in 1644 Southampton drew up an ordinance that formed four wards, with 11 persons in each. By lot two of each ward were employed in cutting up the whale, and for their work they would receive a double share. The ordinance goes on to describe who gets the rest of the shares, on down to a resident and his child or servant. Such ordinances changed with new arrivals and departures. The English were in charge, but most of the work force was native.

The most enlightening chapters, indeed the bulk of the book, are also the most unsettling. It is no surprise that the English immigrants saw the New World as theirs for the taking. They were Christians, the native people were pagans. The Shinnecocks and Montauketts were more than annoyances who stood in the way of the Englishmen’s presumed divine right to the native lands. They also caused problems with the commercial goals the English desired. If they saw a positive to the Indians, it was their usefulness as an easily deceived work force.

The colonial British government mostly sided with the British settlers, no matter how contrived their claims were in breaking tribal leases and deeds. And since beach rights were very important to the newly formed English whaling companies, the native people invariably lost their rights to whales that were on the beaches. They were paid for cutting up the whale carcass, transporting the bone and blubber, and trying out the oil.

The original English whaling companies were harvesting drift whales with their shore crews made up of contracted Indians. By the end of the 1650s, some Southampton men began using the boat-handling prowess of the native people to go out for the companies in twin whaleboats with harpoons to capture the whales swimming offshore. These companies were often successful. The 1686 to 1687 whaling season produced on the South Shore of Long Island (from Montauk to beyond Brookhaven) 2,148 barrels of oil from over 60 whales, valued at 4,300 pounds sterling.

To make a comparison in period values, the whale conservationist Randall Reeves in 1986 compared the 4,300 pounds sterling of the yearly whale catch to the value of Lion Gardiner’s estate. Gardiner’s Island was worth 2,349 pounds sterling at about the same time. The commercial value of whaling was enormous.

The contracts the Indians signed with the companies could often last two or more years. They needed to be available when whales were sighted, and to hold them to the contract they were given an advance that mostly included English coats and blankets. The Indians were to be paid at the end of the season, but by the time that came around, they usually owed more money than they earned. This process kept the natives in constant debt to their employers.

The author has compiled lists of the names of the Indians who were under contract. We can follow them from one company to another. We can also follow the names of their employers, the wealthiest members of the South Fork communities. Names like Gardiner, Ogden, Raynor, Cooper, Howell, Jessup, Shaw, and Topping are only a few from the list of company owners.

It is frustrating to read about the improper use of power by English settlers to entrap the natives into a deeply entrenched bond of servitude by debt. It is also unpleasant to see the dubious ways the English had of lessening the powers of the Indian leaders by duplicitous negotiations. Power and money certainly combined to almost destroy the civilization of the native people of Long Island.

This book is a must-read for anyone interested in the colonial history of Long Island. It is both shocking and fascinating.

Richard Barons is the chief curator at the East Hampton Historical Society. He lives in Springs.

John A. Strong is professor emeritus of history and American studies at Long Island University. Formerly of Southampton, he lives in Maryland.