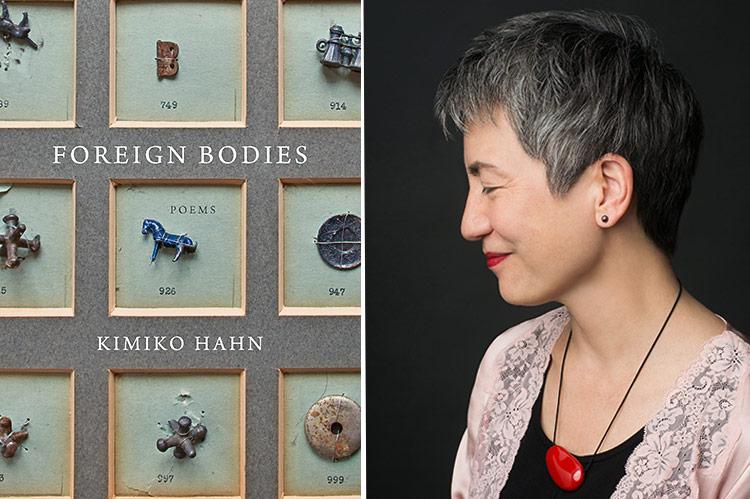 Oh, the allure of stuff, the dangerous excess of it! “Foreign Bodies,” Kimiko Hahn’s poetry collection — “collection” is the perfect word — opens with “Object Lessons,” a sequence that gathers two recurring systems of thought.

One is personal, and takes the form of a hoarding father whose house is so filled with junk that entrance through doors and windows is blocked. The other is scientific, appearing in the form of Dr. Chevalier Jackson, an early-20th-century pediatrician who removed any number of small objects from the throats and other orifices of children, then collected them. He’s best known for inventing endoscopy as a way to see foreign bodies after they’d been ingested into the human one.

From the start, we are alert to the thing that shouldn’t be there inside the other thing — the body is “foreign” when it doesn’t belong inside the body.

But endoscopy also allows us to see things that should be inside the body: organs, vessels, tissue, systems hidden from view by the body’s protective skin. So Ms. Hahn’s collection also reads like a dissection. It’s no coincidence that inside its covers is a slew of smaller collections, in the form of poetic sequences, of which “Object Lessons” is just the first. These sequences explore and amplify the personal and scientific systems introduced in the opening pages.

The personal system is the family, a father in “Object Lessons,” a mother and other family members elsewhere. In these sequences, Ms. Hahn’s project is one of hindsight. After the parent, or in this case both parents, are gone, the children clean up what’s left. Objects are the aftermath of what had been a personality, an influence, a bond troubled or loving, and these objects grow in importance when the person with whom they are associated has become dust and ashes. The daughter cleans up after the father’s death; the mother died some time ago (horribly, in a car crash) and her objects are lost, much to the daughter’s remorse, while the father’s things are all too present and overwhelming in their volume.

In the book’s final sequence, a real estate agent chimes in from time to time with unhelpful skepticism. Even after the stuff is cleared out, the property, from the appraiser’s point of view, has little value. Its import is bound up in the experience of the person who occupied it, and that person is no more. Daughters and grandchildren can remember, but they, too, will become dust and ashes, which someone else will sweep up.

The scientific system, introduced in “Object Lessons” but also recurring throughout, serves as a kind of ballast to the personal. Ms. Hahn’s lay interest in science is longstanding. Her previous two books, “Brain Fever” (2014) and “Toxic Flora” (2010), incorporated research into, respectively, cognition and natural adaptation. Here, scientists as people dominate the book, perhaps because Ms. Hahn admires their curiosity, or because she covets the relative permanence of their evidence, or because she seeks to shed emotional attachment, as scientists seem to do, until the family’s objects can become specimens examined on an autopsy table.

At any rate, the scientific strain more or less takes over the middle of this book with a sequence called “The Cryptic Chamber,” structured after the nautilus. In it, objects associated with motherhood spiral around biological facts about the mollusk, mimicking its shell. A creature alive but practically extinct because that shell is so collectible, the nautilus’s materiality both protects it and dooms it. Language also takes on a materiality.

Here and in other sequences, Ms. Hahn uses a technique of collecting fragments — a word, a phrase — from previously in the series and then reassembling them into a new fragment. The effect is of having read something we haven’t quite read before.

It’s hard to tell what Ms. Hahn’s opinion of materiality is. She calls it “strange” that we have bodies “so / undependable except at the last moment,” but what sort of cognitive, emotional, or moral error is it to depend on other, less perishable objects, to gather them as Dr. Jackson or the hoarding father does? Is it a societal problem, Late Capitalism flooding us with our own overconsumption? Or is it no problem at all, simply a behavior observable by the scientist?

“If only I believed in talismans,” Ms. Hahn writes. The line is from a series about Mary Anning, a 19th-century (female) paleontologist. In this series, the (male) fossil hunters of her day come off as dastardly, taking credit for her discoveries. To Anning, fossils were hardly talismans; they were her livelihood, convertible into hard, cold cash; she sold them to other scientists in order to scrape by. She suspected that they were also descriptions of a geological time and cast of creatures no longer alive. Her behavior, however, was clinically hardheaded, the opposite of hoarding.

Two hundred years later, we’re all acquainted with the “scientific” view of objects: that our possessions, while they describe us, don’t have magical powers. Yet brands like Nike know all too well how susceptible we are to believing one shoe is better than another because of its talismanic swoosh.

Perhaps speaking for this tendency toward magical thinking, “Foreign Bodies” is peppered with five short poems titled “charms.” Each of these uses a creature as metaphor to dispense a vaguely threatening bit of advice about a common virtue. For example, “charms ii” takes on “sympathy” this way:

When you spy a horseshoe crab

Flipped over on the shore

Right it gently in the tide

And with your kin — a true rapport

Other virtues — mindfulness, trustfulness, empathy — get similarly epigrammatic treatments, all in this instructive-but-not voice. We could follow the directions in the first three lines, but what about that fourth? How do we adapt the scientifically prescribed course of action for a horseshoe crab in distress to the messy, emotional, subjective, personal stuff of kin?

“Pay attention to attention,” Ms. Hahn writes. That’s probably the best we can do.

Julie Sheehan, the author of “Bar Book: Poems and Otherwise,” is the director of the B.F.A. program in creative writing at Stony Brook University. She lives in East Quogue.