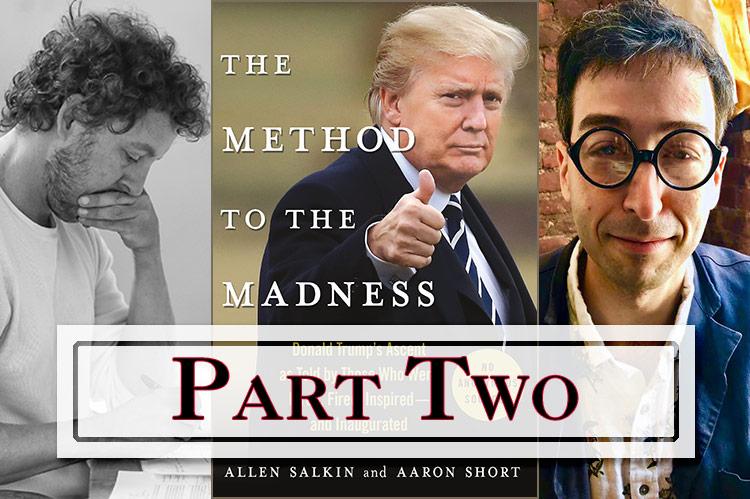 “The Method to the Madness”
Allen Salkin and Aaron Short
All Points Books, $28.99

The replacement of two judges on “The Apprentice” by his daughter Ivanka and Donald Jr. in 2006 “raised the profile of Trump’s children, building the impression of them as integral members of the Trump team and paving the way for Ivanka to become a White House fixture with her eventual husband, Jared Kushner,” argue Allen Salkin and Aaron Short in “The Method to the Madness.”

And the White House was ever on his mind as his show gained stunning popularity. As one of the book’s hundred named sources, Jenn Hoffman, a writer, actress, and contestant on season six, says, “Somehow we get to him talking about George Bush . . . how stupid W is.” Asks Mr. Trump: “Should I run? I think I should run.”

Mr. Trump’s addiction to exaggeration and falsification also were evident. Says his later nemesis Rosie O’Donnell: “I remember watching him on other television shows, and he would lie. He would say, ‘My book is the number-one book in the country,’ and all the producers were going, ‘It’s not . . .’ and I’m like, ‘Why doesn’t somebody say something then?’ And they’re like, ‘He does it all the time.’ ”

Savage public attacks, like the one Mr. Trump later engaged in with Ms. O’Donnell, showed how they “can pay dividends in increased attention,” the authors argue, quoting Mr. Trump on CNBC in 2007: “I love my enemies . . . love having enemies to a certain extent — that’s probably a mental sickness, to be honest with you. But you need it. It invigorates you.”

After “The Apprentice” floundered in season six, NBC reincarnated it as “Celebrity Apprentice” in 2008 with greater and lesser stars playing for charity and Mr. Trump appearing as their even more powerful overlord. Promotion for yet another book in 2009, “Think Like a Champion: An Informal Education in Business and Life,” brought that image into the age of social media with mammoth media and political fallout down the road.

Peter Costanzo, online marketing director for Vanguard Press, recalls pitching Facebook and Twitter: “When I explained to him that we could use it to promote anything having to do with the Trump Organization . . . he started to get very interested.” Said Mr. Trump: “I like the idea of communicating directly with people.”

At first Mr. Costanzo touched base with Mr. Trump and tweeted for him — about his book, his show, other appearances. In 2011, Justin McConney took up the Twitter helm, and by 2012, with Mr. Trump’s presidential interest heating up, he recalls: “His tweeting is becoming more and more rampant. He started calling me on weekends and weeknights . . . ‘George Will just hit me on TV. I have to hit him back. Put this out immediately.’ ”

By that point, the severe economic downturn that Barack Obama inherited with the Oval Office had created just the financial crisis that Mr. Trump, as a celebrity businessman, saw as his best path to the presidency. Conservative groups like the Tea Party were raising hell about the costly Democratic response: bailing out banks and bankrupt homeowners, not to mention Obamacare.

Mr. Trump collected a conservative brain trust including Roger Stone, the Stone associate Sam Nunberg, the propagandist filmmaker Steve Bannon, a lawyer/enforcer in Michael Cohen (later stopped by the Secret Service for taking his pistol to a Mitt Romney rally), and David Bossie, whose Citizens United nonprofit won the landmark 2010 Supreme Court ruling that made political spending free speech not subject to limits.

In August 2010, Mr. Bannon recalls, Mr. Bossie pressed him to meet Mr. Trump. “Why?” Mr. Bannon asks. “He’s thinking of running for president,” says Mr. Bossie. “Of what country?” snarks Mr. Bannon, a veteran of Goldman Sachs in the 1980s who remembered him only as “unclubbable . . . not financeable . . . a legend in the New York Post and Spy magazine.”

“I have never seen this ever, since then,” Mr. Bannon concedes, but Mr. Trump that day “takes the presentation, and he’s focused and engaged . . . how you win a Republican primary, then how you win the presidency. . . . He asked fabulous questions . . . I try to explain economic nationalism, and he gets it right away. . . . How it was anti-Wall Street.”

Mr. Trump was soon plugging his TV show again, but he was inevitably drawn back into the political conversation when his name was included in a 2011 New Hampshire telephone poll, “likely financed by New York City Mayor Michael Bloomberg to explore his own ambitions,” the book claims. And soon Mr. Trump is again being asked about running for president.

“I am absolutely thinking about it,” Mr. Trump says on MSNBC. “I don’t know that I’ll do it. It’s probable that I won’t do it . . . but somebody has to do something. . . . This country will not be great if something isn’t done rapidly.”

“Trump must run for president in 2012,” Mr. Stone proclaims at year’s end in an online essay that argues he “is probably the toughest business negotiator in the country, understands more about capital formation and job creation [and] has broader experience and greater credibility” than any others being mentioned.

Mr. Nunberg subsequently tweaks Mr. Trump’s tone on Twitter and guides him through the mysteries of alt-right websites, radio shows (including Mr. Bannon’s), and assemblies like the 2011 Conservative Political Action Conference (CPAC).

Mr. Trump “tested arguments that Obama was a weak leader, the country was being ripped off through trade, and Obamacare was ineffective. . . . He chose to challenge the president’s identity,” Mr. Salkin and Mr. Short remind us. “If there is any episode in Trump’s political career that answers the question whether there really is a method to his madness, it is his questioning of Barack Obama’s birthplace.”

“Trump had become aware. It was all over the internet,” says the singer, actor, and conservative activist Pat Boone. “I was sharing some of that with Trump by phone and letter, and he was picking up the cause and running with it because he believed the president was not legitimately born in the States.”

Did he really? Mr. Trump, the book reveals, admitted to the Rev. Al Sharpton: “I got to do what I got to do.” And later, to Mika Brzezinski of “Morning Joe” off camera: “I know it’s bad but it works.”

“It looked like he was willing to fight more aggressively and dirtier than any of the Republicans against Barack Obama,” recalled Erick Erickson, the conservative writer and radio host. “This topic was a big deal when people called in.”

Mr. Obama ultimately released his long-form birth certificate, but immediately enjoyed some revenge at the annual White House correspondents’ dinner. Mr. Trump, he joked, “can finally get back to focusing on the issues that matter — like, did we fake the moon landing? What really happened in Roswell? And where are Biggie and Tupac?”

Some in attendance thought Mr. Trump unfazed, others saw him as so humiliated that he decided to run for president himself, though not directly against Obama that year (he flirts with an independent third party campaign but ends up endorsing Mr. Romney). “Perhaps Obama’s insults did spur Trump to run four years later, but for the opposite reason,” Mr. Salkin and Mr. Short argue. “Obama’s jibes . . . elevated Trump to special gadfly status [and] earned him that most valuable asset — camera time.”

Mr. Trump stays a player through self-promotion, a distracting flirtation with running against New York Gov. Andrew Cuomo in 2014, and yet another policy book, “Time to Get Tough: Making America #1 Again,” for which conservative Regnery Publishing drafted a ghostwriter, Wynton Hall, from the alt-right Breitbart website.

Mr. Hall, Mr. Bannon recalls, subsequently touts Mr. Trump as “really smart” and “the number-one applied Jungian psychologist in the country . . . archetypes, all that. . . . It’s actually a chapter in his third book.”

And he did just that with campaign claims of “rapist” Mexican immigrants, the call for a wall to keep them out, and “a complete shutdown of Muslims entering the United States.”

Also with cruel catchphrases for each of his foes: “Lyin’ Ted,” “Low-Energy Jeb [Bush],” “Crooked Hillary.” Says Mr. Bannon: “These are archetypes. He’s not like [Bush] throwing names out like ‘Turd Blossom.’ Because that’s a rich prep school kid putting you down. Trump is collective unconscious.”

Mr. Trump could also see to small details on the hustings, surprising his brain trust with all the ground he covered, even before his formal announcement. Accepting an invitation to the annual Lincoln-Reagan Day dinner of the Pottawattamie County, Iowa, Republican Committee, he is presented with a full-day schedule of events and an hour to relax. “He doesn’t want any downtime,” County Chairman Jeff Jorgensen recalls being told. “I’ve never worked with campaign people that were more accommodating, ever.”

“He was a spectacle that we couldn’t get enough of. No guilt. None whatsoever. At the time it was best story going,” says Jonathan Wald, a TV news producer, one of the media managers unavoidably complicit in the successful selling of Candidate Trump, and somewhat ironically the son of the onetime NBC News president Richard Wald, later ABC’s senior vice president of editorial quality.

The book leaves us with the escalator entrance to Mr. Trump’s formal announcement, stage-managed to the smallest detail, including his use of Neil Young’s song “Rockin’ in the Free World” (though Mr. Young initially protested) and paid actors in “Make America Great Again” hats and T-shirts as well as actual campaign volunteers.

NBC cut ties with Mr. Trump, as did other business connections. “He lost a lot of money,” Mr. Nunberg recalls. “The irony was, whenever they hurt his business it was going to help him . . . politically to become a martyr.”

So, crazy like a fox? Trump has taken up the mantle of martyrdom again under impeachment by the House and acquittal by the Senate, both largely along party lines (Mr. Romney’s being the sole G.O.P. vote for conviction). And his victory rant to G.O.P. V.I.P.s was among the least articulate, most rambling, vengeful, and vulgar of his presidency — “vicious . . . horrible . . . evil . . . low-lifes . . . top scum . . . bullshit” — yet again raising questions about slipping brain function. But on he goes. Perhaps less fox, more . . . ?

David M. Alpern, a former News­week senior editor, ran the “Newsweek On Air” and “For Your Ears Only” syndicated radio shows for over 30 years and now moderates discussions on foreign affairs for the library in Sag Harbor, where he lives